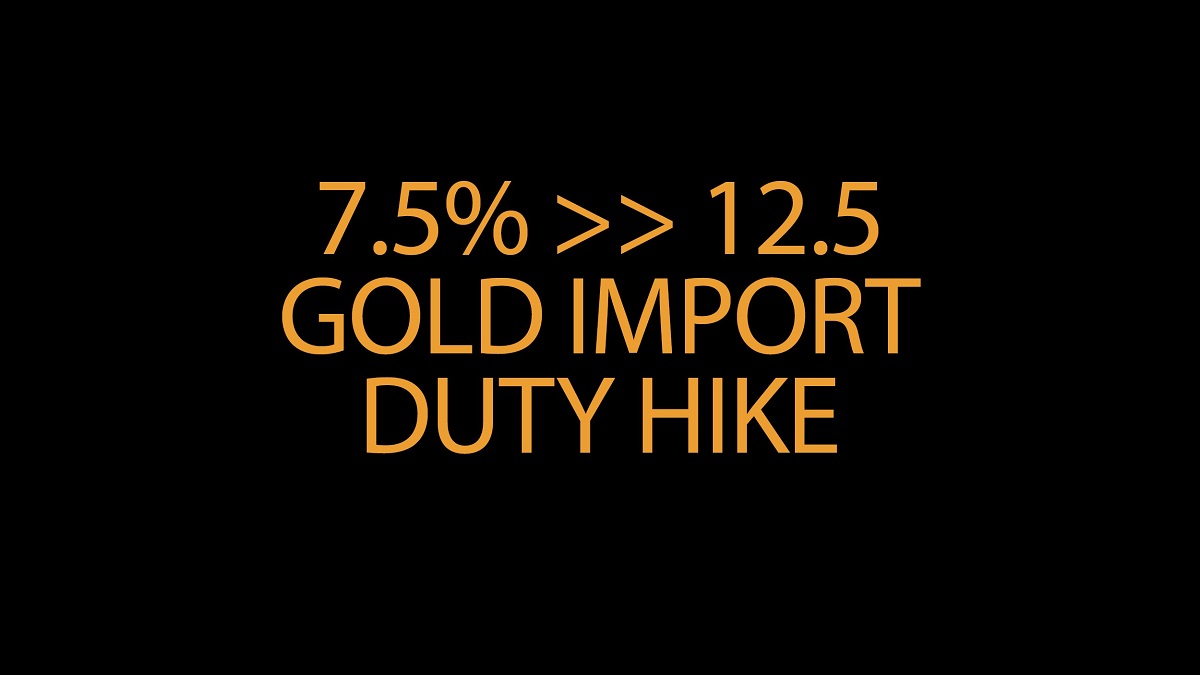 The Centre has raised the basic import duty on gold from 7.5 per cent to 12.5 per cent. The move, announced on 30 June, is a response to the falling Indian rupee, which recently hit a record low of Rs80 against the US dollar. The clear intention is to reduce the pressure on India’s current account deficit and resist further depreciation of the rupee.

For the gems and jewellery industry, however, the hike has come as a shock. Still recuperating from a crushing pandemic, this is a decision that is neither expected nor welcome. Retailers are divided about the aptness of the move and unhappy with the lack of forewarning.

“There was a sudden wave of gold imports in May and June that [affected] the trade deficit badly. This is a knee-jerk reaction by the government,” says Abhishek Kajaria, founder, Avama Jewellers, Kolkata. “Although it puts pressure on the supply chain, it is a justified step,” he says, expressing his mixed feelings. “It is a [reversal of] the government’s reduction of the import duty to 7.5 per cent last year, which had strengthened the domestic industry.”

Apart from hurting an already stressed domestic industry, there is growing concern about a likely rise in gold smuggling. “The new duty creates an 18 per cent cost difference between gold in India and the Middle East. The price difference between gold rate in India and neighboring countries is around Rs9 lakh per kg, so, obviously, smuggling will increase,” says Mansukh Kothari, Owner, Vasupati Jewellers.

A revival of smuggling also would lead to unhealthy competition in the market, as unorganised players take undue advantage of the arbitrage opportunity and organised players lose out. Jewellers in small towns and rural markets, where the trade is largely unorganised, will suffer more than metro-based brands.

Even before smuggling begins to distort the market, Kamal Singhania of Abhusan India, Jamshedpur, says, the price rise will have “an immediate impact on footfall”. He sees a possible silver lining: “The other side of the price hike is that it could lead to massive innovation in the gold designing industry. When a customer comes to a retail store, they come with a fixed budget. They then buy whatever comes in that budget, whether 1gm or 50gm. Hence, lightweight jewellery is definitely a savior in the future.”

Lighter jewellery has been in demand for some time now, because of the higher gold rate over the last few years and changing consumer behaviour. “The current generation prefers to invest in pieces they can wear regularly, and not heavy jewellery that is left in lockers,” says Sharat Shet, Owner, S L Shet Diamond House, Mangalore, Karnataka.

“So, for moderate buyers, the new import duty is not going to make a very big difference.”

Rishu Kumar Gupta, director, Kasturi Jewellers, Patna, Bihar, acknowledges that the government has to manage the value of the currency, but points out that it is consumers who will have to pay. “No matter how heavy the discount one gives on the making charges of gold jewellery, one can’t ignore the price rise of gold,” he says. “Thankfully, we have a broad base of loyal customers who are aware of the development, understand the reason behind the rate hike, and are not shying away from buying gold jewellery.”

As gold prices inevitably increase in local markets, retailers will have to adapt. “Retail brands should accelerate their efforts to promote the beauty of jewellery and that of gold as a metal for adornment, instead of stressing on price,” Kajaria says, adding that attractive offers and robust marketing can divert attention from the import duty hike.

Gold jewellery is valuable not only because of gold. Jewellers and retailers can enhance its value significantly with design and fine craftsmanship, attributes which allow them to charge above the base gold rate. The lack of perfect correlation between gold rate fluctuations and retail prices means that the rise in import duty will affect the wholesale market more than the retail market, Shet explains.

The duty increase, he says, “will have a huge impact on people dealing in bullion, as their capital investment will go up significantly”. Margins in gold bullion trading are slim, therefore bullion dealers’ profits will erode.

The gold rate has been at a historic high in recent years. With the metal already at peak price, says Pratik Dugar, director, Indian Gem & Jewellery Creation, Kolkata, the revised import duty is bound to hurt consumers as well as dealers and retailers.

“The sudden rise in the price of the gold is a huge concern for us and definitely for the end-consumer,”  he says, speaking for many of his peers. “The industry representative bodies have already escalated concerns about this issue to our respected union finance minister and the concerned departments. Since the price rise, we are offsetting the impact through offers on making charges. But we believe this move definitely needs to be re-evaluated.”

Plausibility of Polki, Jadau and Kundan’s hallmarking, industry weighs in on the debate