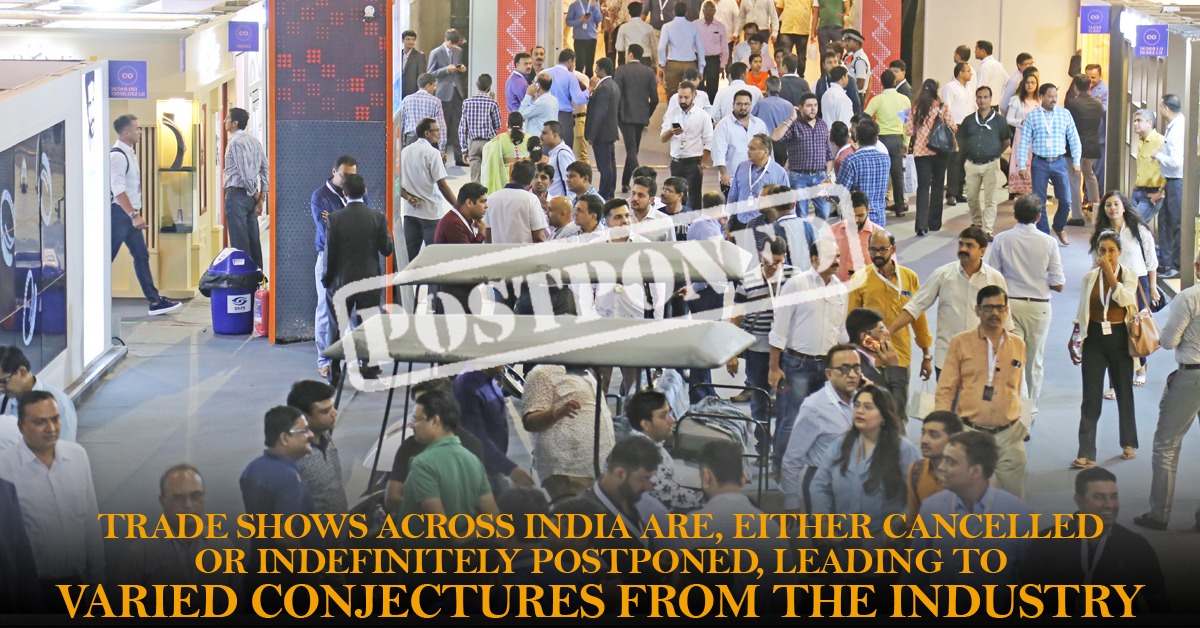 The world is in a state of uncertainty with the Corona virus overwhelming all aspects of life similarly. The gems and jewellery industry is severely affected. The fate of India’s trade shows hangs in balance as most events to be held over the next few months have been called off. However, retailer and manufacturers aren’t distressed and have seemingly accepted the new normal that has nonetheless led to considerable losses — with the business grinding to a halt. Bracing for further impact as the year progresses, they feel no urgency for trade events and, instead, feel it is more important at present to stay home and save lives.
Demand in doldrums

“There is not much demand for B2B shows in the country currently,” says Paresh Soni, director, CH Jewellers, Vadodara. “This is because majority weddings stand cancelled this year and also because NRI customers will not risk their lives to travel to our shows. The lockdown has led to low demands and major losses have been incurred.” He points out that retailers’ buying will reduce to 30 per cent of the usual capacity.

Given flailing demand, Vikas Mehta, director, Anchal Jewels, senses a lack of interest amongst manufacturers. “They are also not keen as this means spending a large sum of money to set up display booths, which would be in vain if buyers do not attend.

Mehta says that during Signature 2020, retailers had bought stock for the next three to four months in preparation of the auspicious festival Akshaya Tritiya and the wedding season. All this is gathering dust either at the retailers or with manufacturers. Despite a few retailers opening shop, footfalls are negligible. “I don’t see a point in holding trade shows this year. If needed, retailers will directly source stock from manufacturers they have a working relationship with.”

The world is flummoxed by the Corona virus and it is not clear when it would be contained sufficiently to allow free domestic and international travel. In such a situation, expecting events with active participation is difficult.

Colin Shah, vice chairman, GJEPC, “We have decided to postpone the 37th edition of India’s biggest trade show — the India International Jewellery Show (IIJS Premier) — scheduled from August 6 to 10.” The committee members are deliberating on a feasible date in the future.

The priority of all business owners is to secure lives of the workforce over attending trade shows, says Vipul Shah, owner, Aura Jewels. Rahul Jain, CEO, Radhika Jewel Craft, agrees, “No one will risk their lives to attend an event.”

Chetan Satikuvar, CEO, JP Exports and Ishu Datwani, owner, Anmol, concur citing reasons that attendees would not take the risk of travel and hotel stays. “The shows are likely to begin only next year,” adds Datwani.

Fate of other shows is also seemingly bleak. The debut edition of the India Gem and Jewellery Show (GJS) — scheduled from June 25 to 29 in Mumbai has been cancelled.

N Anantha Padmanabhan, chairman, Gem and Jewellery Domestic Council of India, says, “The pandemic has paralysed planning and coordination activities for the upcoming edition of GJS. The venue, Bombay Exhibition Centre, is being used as a quarantine zone. It will take weeks to make it available for expos. It is difficult to organise and execute an exhibition at present.” “All normal activities stand impeded. We will announce new dates shortly based on government directives,” he adds.

Praveen Agarwal, partner, Geeta Shyam Jewellers, Jaipur, says organisers should not take hasty decisions. “There is time enough till the Jaipur Jewellery Show and the Gujarat Gold Jewellery Show (GGJS) which usually happen in December. The shows can surely be organised if the Corona virus is successfully contained and proper medication is available by then. Since the next big show — IIJS Signature — may only happen in February, it does not make sense to cancel these shows already.”

On being asked about the plans for the show, Paresh Jhurmarwala, Director, GGJS, says, “The market sentiments are slowly improving and everyone is talking positively. So, I am hopeful that the situation will further improve in the coming months. We have recently announced the dates for Gujarat Gold Jewellery Show (GGJS) which will happen at the end of this year from 26th-28th Dec 2020. We are expecting a good response from the trade as well. We have made several representations to the state government and they have responded very positively in support of the industry.

Sanjay Kala, President, Jewellers Association Jaipur, also assures that JAS will happen but in a smaller format. “Unlike previous occasions where huge amounts of participants were invited for these shows, we will have to formulate a new strategy so that we can limit the number of people,” he adds.

Many want to keep the momentum going. “A small show will uphold the spirit and significance of trade shows and send out a positive message to the trade. It is worth the risk despite purported reduced sales,” says Rohit Sharma, marketing manager, Motisons Jewellers, Jaipur, in reference to IIJS.

A breakthrough in decisions by September is possible only if the situation improves — by flattening the curve and introduction of vaccines and/or medicines. “The IIJS can be timed before the festive and wedding seasons begin in October. The show is important to allow the industry to grow and helps explore fresh designs and new vendors,” says Binaisha Zaveri, director, TBZ -The Original.

Vikas Kataria, managing director, DP Abhushan Jewellers, says “Diwali is in November. Even if the show happens in the second week of September, the diamond manufacturers will have ample time to deliver the orders.”

“All trade shows were cancelled post Signature 2020 in February. The industry will be helped back to its feet if IIJS happens anytime between September and October,” says Deepak Seth, Partner, SK Seth Jewellers, Mumbai.

Sumit Kamalia, director, Uma Ornaments, says that trade shows even at the end of the year will boost the spirits for the winter wedding season. “An IIJS show in December may, however, jeopardise the Signature edition later. But the IIJS — as a platform — is more important since it decides the buying pattern for the industry. Cancelling of the Signature event will not be significant,” reasons Kamalia.

“The organisers should merge the IIJS trade show with its Signature chapter and hold a grand event. This will give a positive boost to the industry,” says Mehta from Achal.

Aware of the significance of IIJS as a trade platform, Shah from GJEPC, assures, ‘We will surely conduct the show once things settle down. The dates for IIJS will be announced soon.’

Organisers will have to follow strict public health guidelines once the states give permission to hold trade fairs. There is expected to be mandatory requirements regarding number of visitors, crowd management and social distancing. This will involve expansive groundwork, leading to restricted versions of original events.

The GJEPC has been working with policy makers to determine operations of factories, exporters and retailers post lockdown. Shah says, “In consultation with the government, we have charted out stringent safety norms, while also ensuring that businesses return to normal.”

“We have clear directives on how to conduct trade shows without compromising anyone’s interests and the team is proactively planning a new format,” he says.

Shweta Dhanak, CEO, Vijay Exports, stresses that B2B expos are significant for the trade. “There should be restrictions and slots on the entry and exit of visitors, to be provided at the time of registration.” It could be four-hour slots to one batch of visitors spanning three days and then the next batch should be similarly allowed. “We will have to put health over wealth and focus on social distancing.”

A longer version of the IIJS — spanning 10 to 12 days (depending on customer confirmations) — could be the way ahead, says Khushboo Ranawat, director, Swarnshilp Chains and Jewellers. “Exhibitions should now have the option of private appointments. Depending on the size of the stall, four to five clients should be allowed in at a time. Jewellery must be order based and showcased via augmented reality technology to avoid physical touch. This is the new normal. Even with a vaccine, habits such as sanitisation, washing hands, use of masks, avoiding street food, etc. will continue,” she adds.

Rajendra Agarwal, Sona ChandiJewellers, Kanpur suggests, “The IIJS receives two kinds of visitors — retailers and wholesalers. Organisers should allot the first three days to retailers and the next two to wholesalers to manage the crowd efficiently. Also, the GJEPC should restrict entry of visitors to one person per company.”

Rohit Sharma of Motisons Jewellers says that once the health crisis betters, “event organisers could create an online platform putting out video presentations of each vendor with their booth numbers.” This would help visitors decide which stalls they wish to visit at shows, he adds.

Despite falling sales, demand uncertainty, ambiguity of government directives and fears of a second wave of the virus, the verdict on trade shows is clear — these events should be organised at the first given opportunity towards the end of the year, maintaining utmost caution and safety.