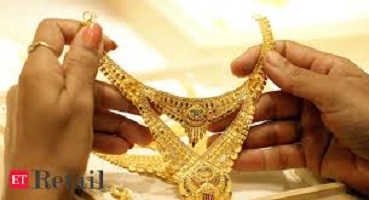 India Ratings and Research (Ind-Ra) on Monday said it expects Jewellery sales to decline by 25 per cent in 2020-21 (April-March) on account of over 40 days of lockdown following COVID-19 pandemic and overall reduction in disposable income.

Jewellery demand, which is primarily driven by marriage season and a couple of festivals in the first quarter, has been significantly washed out due to the ongoing nationwide lockdown, Ind-Ra said in a report.

The demand for retail jewellery will remain muted in 1HFY21 (April-September), however, a sharp recovery is expected in the third quarter of FY21 (October-December) due to the festive and wedding season.

Gold jewellery demand had already slowed down in FY20 in terms of tonnage and revenue due to the economic slowdown and increased gold prices, it said.

The possibility of a recovery of demand in FY21 has been derailed by the COVID-19 led lockdown and the subsequent continued economic slowdown in the country, it added.

Ind-Ra already has revised its FY21 GDP growth twice since January 2020 to 1.9 per cent, and a further downward revision is possible if the pandemic continues to evolve, it said.

This can have a prolonged negative impact on gold demand because of the possibility of a further reduction in the overall discretionary spend.

As a result, Ind-Ra said, there is likely to be an overall 25 per cent year-on-year decline in retail jewellery revenues in this financial year.

However, business from rural areas and weddings may remain resilient, it said, adding that from the fourth quarter of FY21 (January-March), sales are likely to improve due to the base effect and expected normalisation in economic activities.

However, any further lockdown and prolonged impact of COVID-19 will lead to a further downward revision of estimates, it added.

The volatility in gold prices is also expected to hurt consumer sentiments, the report said.

In FY21 till date, gold prices have remained high, amid the COVID-19 outbreak and its adverse impact on economic activity and global markets, it said.

Investors across the world are fleeing to safer investments including gold, Ind-Ra said, adding that domestic jewellery and gold consumer demand is dependent on a specific budget, thus rising gold prices will have a negative impact on the overall demand in the short term.

Additionally, it said the share of old gold purchases as a percentage of total purchases by jewellers could increase from around 35 per cent for large organised jewellers.

Thus, the total gold import of India, which is primarily driven by jewellery demand, is also likely to drop to a decade-low in FY21.

In the long-term, however, Ind-Ra believes that jewellery demand will be supported by the rise in savings at the hand of salaried middle-class and upper-middle class end-users due to postponement of purchases and cancellation of travel or tourism plans among other reasons.

However, it remains to be seen whether such savings would add to jewellery demand in 2HFY21 (October-March) or will be used in compensating loss of income or saved for emergency situations, it said.

The overall long-term demand outlook remains upbeat because gold remains to be an attractive investment destination, it said.

The industry is expected to bounce back after FY21 with increasing gold rates and continued attraction to gold jewellery due to traditional factors, it added.

This Mother’s Day, Senco Gold & Diamonds invites everyone to wish their moms in a creative fashion