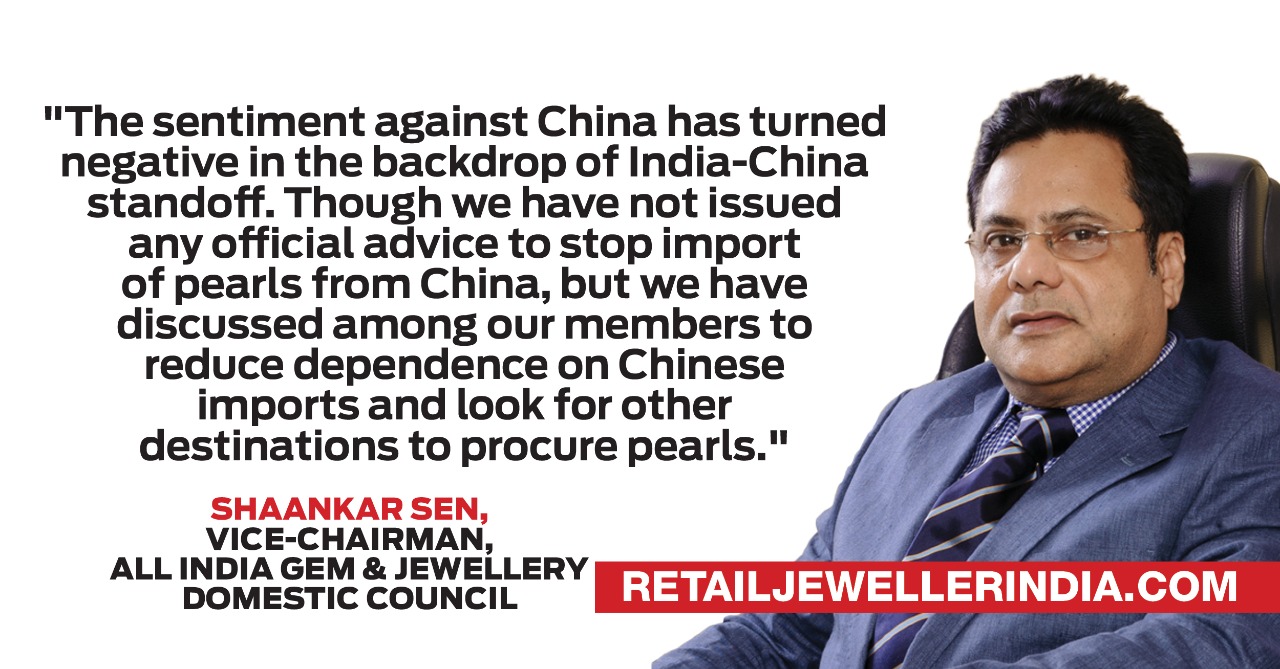 The first such move has been taken by Bengaluru’s C Krishniah Chetty Group of Jewellers. The 150-year old jewellery brand said its gemologists will stop procurement and use of Chinese-origin pearls, and instead will use Japanese or Venezuelan or Indian pearls in making jewellery.

Amid the rising chorus to shun Chinese products, the Indian jewellery trade is considering sourcing pearls from Japan, Venezuela and Australia instead of China.

The first such move has been taken by Bengaluru’s C Krishniah Chetty Group of Jewellers. The 150-year old jewellery brand said its gemologists will stop procurement and use of Chinese-origin pearls, and instead will use Japanese or Venezuelan or Indian pearls in making jewellery.

According to the company, China has increased production of freshwater pearls and has surpassed Japan in quantity over the last decade.

“Although Chinese pearls are much cheaper and plentiful, the import duties must be increased to make it unprofitable and to discourage these imports,” said C Vinod Hayagriv, managing director of the 150-year-old jewellery group. “With the sinister possibility of China being squarely behind the global pandemic, we profess a total ban on use of Chinese gems by Indian jewellery industry.”

Shaankar Sen, vice-chairman of All India Gem & Jewellery Domestic Council, said the sentiment against China has turned negative in the backdrop of India-China standoff. “Though we have not issued any official advice to stop import of pearls from China, but we have discussed among our members to reduce dependence on Chinese imports and look for other destinations to procure pearls.” The council has 300,000 members.

Surendra Mehta, national secretary, India Bullion & Jewellers Association, said “Dependence on Chinese products cannot be reduced overnight. But over a period of time, jewellers can look at other destinations like Taiwan, Vietnam and Japan to procure pearls. Production in India can be increased too.”

Praveen Khandelwal, national secretary, Confederation of All India Traders (CAIT), said jewellers should shun Chinese products right away. CAIT, which has stepped up its anti-China campaign, has around 70 million traders and 40,000 trade associations within its fold.

Aditya Pethe, director of Mumbai-based Waman Hari Pethe Jewellers, said “We do not import pearls from China. But we were importing fashion jewellery from China. Now we have stopped it and manufacturing on our own.”