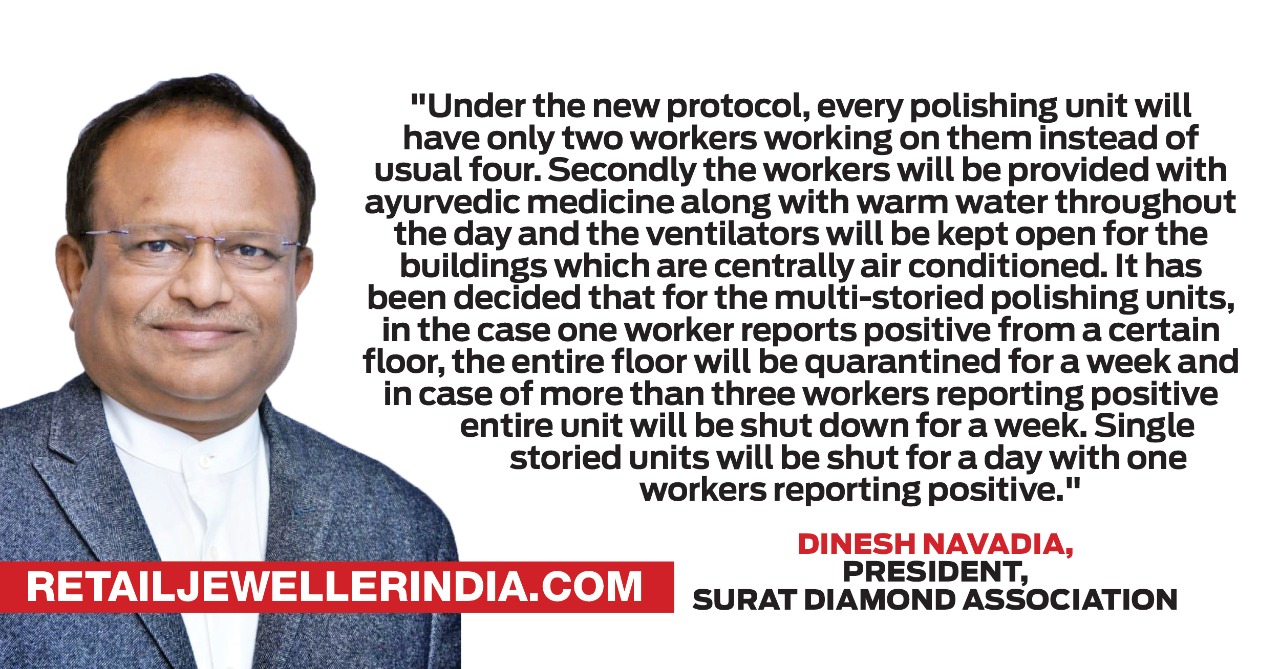 Speaking to ET, President of Surat Diamond Association Dinesh Navadia said that under the new protocol, every polishing unit will have only two workers working on them instead of usual four.

As the diamond industry trudges itself back to operation, concerns are now rising with growing number of Covid positive patients among the diamond workers. On Monday, Surat Diamond Association held a meeting with the Municipal Commissioner and the Mayor to thrash out a new protocol to fight the spread of the virus. So far around 300 positive cases have been reported from the diamond polishing units, which have started operating.

Speaking to ET, President of Surat Diamond Association Dinesh Navadia said that under the new protocol, every polishing unit will have only two workers working on them instead of usual four. Secondly the workers will be provided with ayurvedic medicine along with warm water throughout the day and the ventilators will be kept open for the buildings which are centrally air conditioned.

Navadia further said that it has been decided that for the multi-storied polishing units, in the case one worker reports positive from a certain floor, the entire floor will be quarantined for an week and in case of more than three workers reporting positive entire unit will be shut down for a week. Single storied units will be shut for a day with one workers reporting positive.

While the workers are now being asked to download Arogya Setu app, those workers with hypertension, diabetes or above fifty-five years of age will not be asked to work, he added. The diamond market as well as the safety vault will remain closed on Saturdays and Sundays, he added further. Earlier a demand was made to shut down the entire industry for a week.

Recently, the managers of diamond units emerged as the super spreaders among the workers as they are the ones who distribute packets of diamonds to the polishers and thus come in contact with a large group of people. Diamond unit owners were asked to sanitize the packets before giving them to workers. While the lockdown dealt a crushing blow to the industry with many workers returning home, the industry started working albeit at a very slow pace with unlock-1 being announced. However, Katargam area, the hub of diamond industry has emerged as a new hotspot for Corona in Surat.

Italian Exhibition Group and Vicenzaoro give voice to the gold and jewellery world: Voice will debut, from 12th to 14th September in Vicenza, at the Expo and in the city.

To avoid China, Indian jewelers may import pearls from other countries