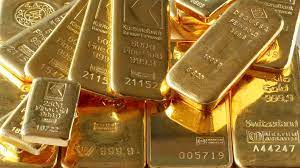 India’s gold imports, which have a bearing on the country’s Current Account Deficit (CAD), rose 6.4 per cent to USD 12.9 billion during April-July this fiscal due to healthy demand, according to government data. The imports stood at USD 12 billion during the same period a year ago.

In July 2022, however, imports of the precious metal fell sharply by 43.6 per cent to USD 2.4 billion, as per the latest data released by the commerce ministry.

Increase in gold and oil imports during the first four months of this fiscal contributed to a record trade deficit of USD 30 billion, against USD 10.63 billion in April-July 2021.

India is the world’s second-biggest gold consumer after China. The imports mainly take care of the demand by the jewellery industry.

The gems and jewellery exports during the first four months of the current fiscal grew by about 7 per cent to USD 13.5 billion.

A wider trade gap during 2021-22 expanded the country’s current account deficit at 1.2 per cent of GDP against a surplus of 0.9 per cent in FY21, according to the Reserve Bank data released in June.

The Modern Guide to Antique Jewellery