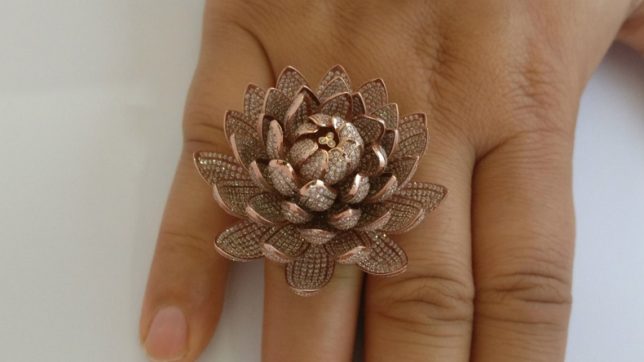 It is a known fact that Surat is India’s diamond hub and is well known for polishing and cutting of diamonds. The city has again hit the headlines after its 2 jewellers managed to register their names in Guinness World Record after successfully putting the maximum diamonds on a ring. According to a report, the diamonds were set into an 18 carat rose gold structure looking like a lotus consisting of 6,690 diamonds. The jewellers identified as Vishal Agarwal and Khushbu Agarwal have created this ring and have made 48 diamond encrusted petals in it. The price of this marvellous piece is Rs 28 crore.

The ring weighs more than 58 grams and took around 180 days to be made. As per the record, all the diamonds incorporated in the ring have been verified are conflict free and from independent sources. The report further suggests the manufacturing of this beautiful ring was manufactured by Khushbu’s company Hanumant Diamonds which is located in Surat’s Mahidarpura.

When the media asked the 2 jewellers about how this idea came to their mind, they quickly said that they wanted to raise an awareness about the importance of water conservation. Interestingly, the design of the ring also symbolises the national flower of India-Lotus. Khusbu and Vishal further stated that fame is too much attached to a Guinness World Records title and they can use this opportunity to bring like-minded people to work towards a beautiful world. It is believed that 9 out of 10 diamonds in the world are cut and polished in the world are from India and that about 75% are from Gujarat’s Surat.

The video of the eye-catching ring was shared by Guinness World Records on Facebook is doing rounds on social media and has been viewed over 4 lakh people. A couple of people have also criticised the manufacturers for wasting so much of money on just one ring. Looks more like a stuffed artichoke than a lotus. It is a sheer waste of money, the post read.