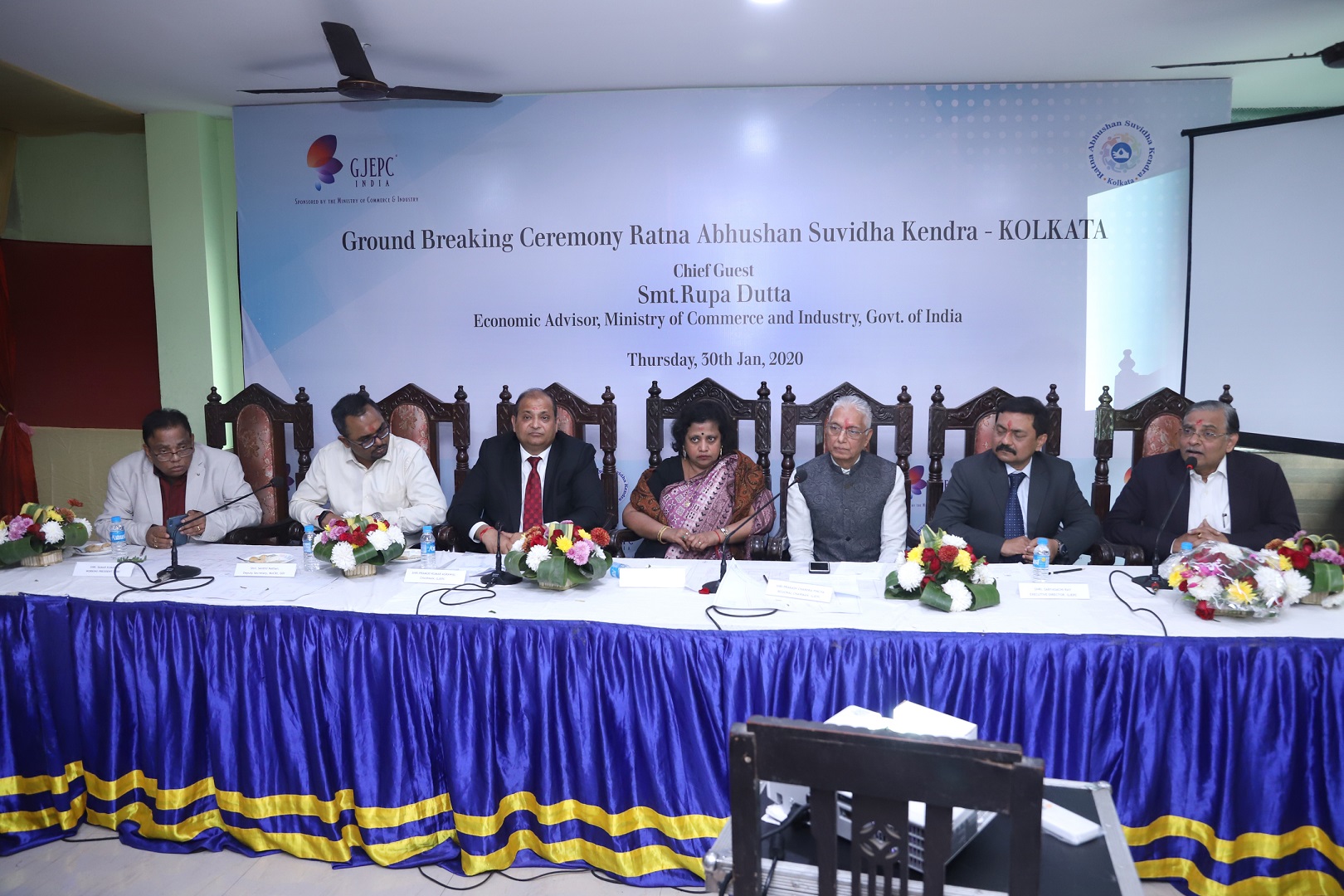 Ground-breaking ceremony of Common Facility Centre (CFC) at Bow Bazar in Kolkata was held today in the presence of Smt. Rupa Dutta (Economic Advisor, Ministry of Commerce & Industry, Government of India), Shri Senthil Nathan (Deputy Secretary, Ministry of Commerce & Industry, Government of India), Shri Pramod Agrawal, Chairman, GJEPC; Shri Prakash Pincha, Regional Chairman, Kolkata, GJEPC, along with others. GJEPC is setting up a Common Facility Center at Bow Bazar with a view to enhance the productivity and quality of products, especially the small gem and Jewellery units set in Bow Bazar and its surrounding areas.

GJEPC with the support of the Ministry of Commerce and Industry has already set up Common Facility Centers in Amreli, Palanpur, Visnagar and Junagadh in the state of Gujarat. CFC at Bow Bazar is being set up by GJEPC in association with Swarna Shilpa Bachao Samiti (SSBC) at Bow Bazar, Kolkata.

Smt. Rupa Dutta, Economic Advisor, Ministry of Commerce & Industry said, “The gem and Jewellery industry has been an important contributor to the economy of the country. It also employs 5 million people. Our effort is to enhance the productivity and quality of products of our MSME units and make them contribute to exports. The concept of Common Facility Centre is ideal where small units can get easy access of capital-intensive facility which is beyond investment capacity of individual Jewellery manufacturing unitholders. I am sure that such initiatives can surely boost exports from the country”

Shri. Pramod Agrawal, Chairman, GJEPC said, “India is a leading player in the global gem and jewellery market. To sustain its leadership, GJEPC has been facilitating the industry especially the MSMEs who are the backbone of the industry, with modern machines and tools at affordable prices at Common Facility Centers. Currently, the artisans are manufacturing jewellery on make to order basis for retail jewellers or wholesale manufacturer. They are using old technology to manufacture the jewellery. Usage of technology such as casting technology, finishing techniques such as tumbling, magnetic polisher etc. are found only in some of the units. Benchwork is also carried out by using old techniques. Our effort is to give small and medium jeweller manufacturing unit holders access to a common platform where they could take benefit of the equipment globally used in Jewellery industry, thus improve their overall performance when it comes to manufacturing Jewellery.”

Shri Prakash Chandra Pincha, GJEPC Regional Chairman, GJEPC, Kolkata said, “To remain competitive in the current world market, where modern technology is being used extensively, it is important we give our artisans and karigars access to modern machines and tools for manufacturing jewellery. At CFC Bow Bazar, even smallest units of artisans who don’t have any machine can get their various manufacturing processes completed at a very nominal cost in a highly transparent manner which otherwise require investment in costlier machines or unnecessary expenditure. CFC at Bow Bazar will also be helpful to other nearby clusters as Bow Bazar is centrally located. This will help the small units to increase the production and quality of products.”

The skill and capabilities of Bengal artisans when it comes to jewellery manufacturing is well known. Kolkata is the national jewellery hub, known for making quality and high-class designs in handmade jewellery and the CFC will provide them with an opportunity to produce jewellery keeping their process losses minimized.  The city is famous across the world for its Kolkata jewellery.

The overall gem and Jewellery exports from the country accounts for USD 40 billion in 2018-19. The vision is to grow exports to USD 75 billion in the next 5 years. It is expected that Kolkata will play an important role in achieving this target.

About GJEPC: The Gem & Jewellery Export Promotion Council (GJEPC) was set up by the Ministry of Commerce and industry, Government of India (GoI) in 1966. It was one of several Export Promotion Councils (EPCs) launched by the Indian Government, to boost the country’s export thrust, when India’s post-Independence economy began making forays in the international markets. Since 1998, the GJEPC has been granted autonomous status. The GJEPC is the apex body of the gems & jewellery industry and today it represents over 7,000 exporters in the sector. With headquarters in Mumbai, the GJEPC has Regional Offices in New Delhi, Kolkata, Chennai, Surat and Jaipur, all of which are major centres for the industry. It thus has a wide reach and is able to have a closer interaction with members to serve them in a direct and more meaningful manner. Over the past decades, the GJEPC has emerged as one of the most active EPCs, and has continuously strived to both expand its reach and depth in its promotional activities as well as widen and increase services to its members.