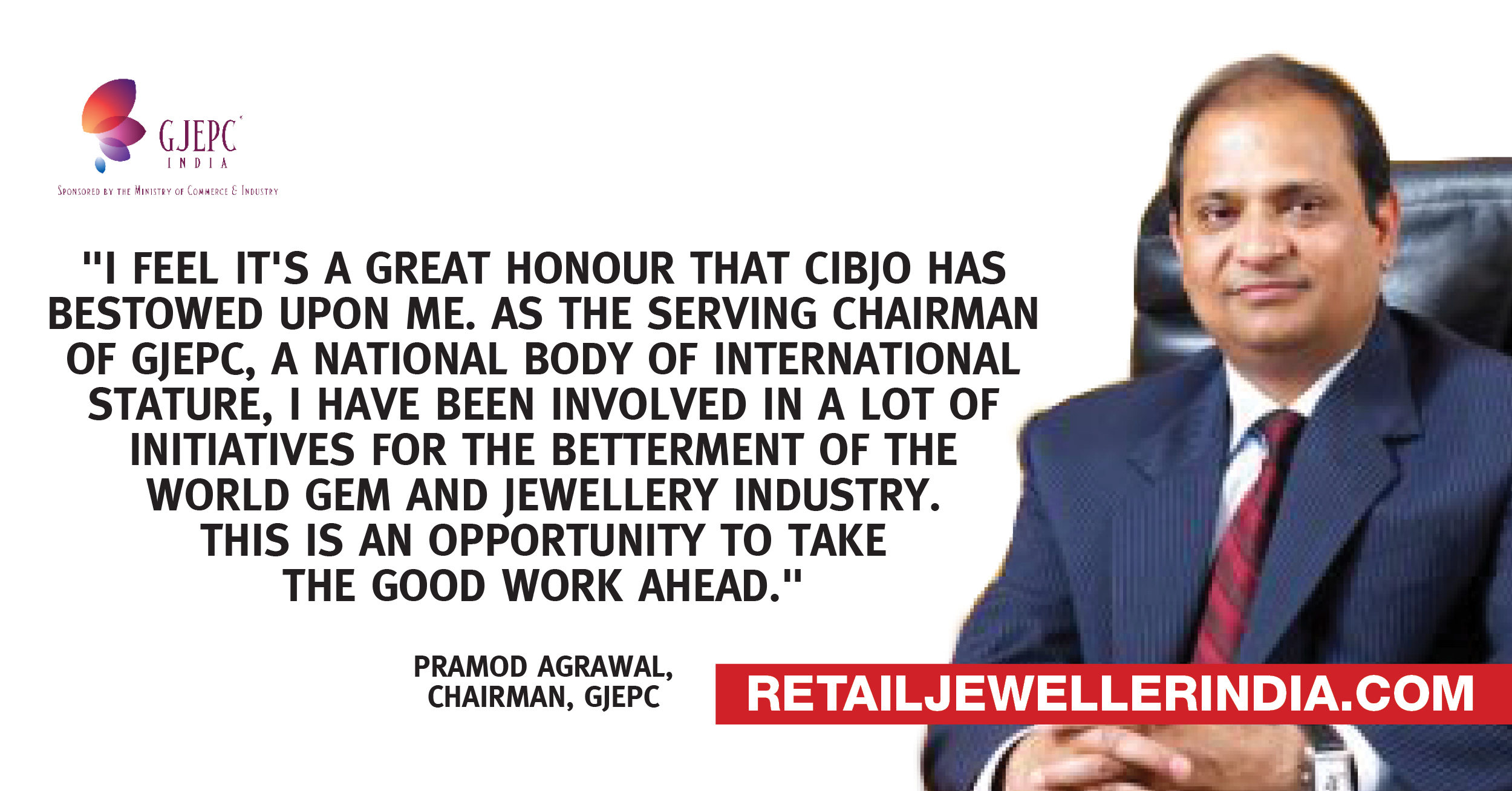 Pramod Kumar Agrawal, current Chairman of the Gem & Jewellery Export Promotion Council (GJEPC), has become the first member of the Indian industry to be elected one of the three Vice Presidents of CIBJO, the World Jewellery Confederation. He was nominated by CIBJO President Gaetano Cavalieri, and the decision was confirmed by the organisation’s General Assembly and Board of Directors, meeting in Bahrain, November 18-20, at the 2019 CIBJO Congress.

Mr. Agarwal will serve a two-year term as Vice President alongside Roland Naftule of the United States, a former president of both the International Coloured Gemstone Association (ICA) and the American Gem Trade Association (AGTA), as well as a former member of the Board of Governors of the Gemological Institute of America (GIA); and Jonathan Kendall of the United Kingdom, President of both the De Beers Group Institute of Diamonds and De Beers Group Industry Services. At the CIBJO Congress, Dr. Cavalieri was also elected for another term as CIBJO President.

Originally founded in Paris in 1926, CIBJO (Confédération International de la Bijouterie, Joaillerie, Orfèvrerie des Diamants, Perles et Pierres) is a global organisation made up of national jewellery associations from about 45 countries, as well as commercial members who represent several of the largest companies operating in the industry, as well as international organizations. It is the only worldwide body active in all sectors of the greater jewellery industry, along the entire chain of distribution, from mine to marketplace. CIBJO’s purpose is to encourage harmonisation, promote international cooperation in the jewellery industry, and to consider issues that concern the trade worldwide. Foremost among these is to protect consumer confidence. To achieve that, it developed its Blue Book system to advance the goal of universal standards and terminology in the industry. Today it is the most widely used set of industry standards. There are Blue Books for diamonds, coloured gemstones, pearls, precious metals, gemmological laboratories, coral and responsible sourcing.

A milestone in the history of the jewellery industry was recorded in 2006 when CIBJO became the first and only organisation in the diamond, gemstone and jewellery sectors ever to receive official consultative status with the Economic and Social Council (ECOSOC) of the United Nations. That same year it was accepted as a member of the UN Global Compact.

“I am delighted that Pramod accepted the nomination and that it was accepted so readily by the CIBJO members and directors,” said Dr. Cavalieri. “Given the primary role that India plays in almost all sectors of the industry, it is absolutely necessary that the country is appropriately represented in the leadership of our confederation. With his acumen and vast experience, Pramod is just the right person to fill the role. I am confident that he will make a significant contribution to the important work we do.”

“I feel it’s a great honour that CIBJO has bestowed upon me,” said Mr. Agarwal. “As the serving chairman of GJEPC, a national body of international stature, I have been involved in a lot of initiatives for the betterment of world gem and jewellery industry. This is an opportunity to take the good work ahead. I thank the CIBJO President, Dr. Gaetano Cavalieri, and all the other CIBJO members. Along with them, my efforts will be to bring the change the industry wishes to see.”

Today chairman of GJEPC, Mr Agarwal has served as a Member of the organisation’s Committee of Administration many years and was Regional Chairman of GJEPC in the Rajasthan Region before being elected national chairman.

In his private capacity, he is Chairman of Derewala Industries Limited, one of the most prominent gemstones and jewellery corporation in Jaipur, which is known across the world as the centre of India’s coloured gemstone industry.

He started his career in the city of Jaipur in silver jewellery in 1986. With humble beginnings, Derewala industries evolved into a multi-faceted vertical company, and today employs 1,500 people in four units, producing and supplying gold jewellery, silver jewellery and fashion jewellery in India and abroad.