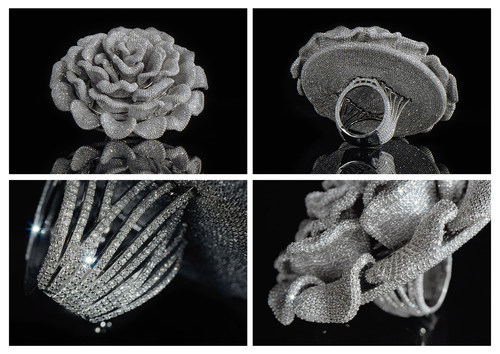 The model of the ring has been inspired by the pink oyster mushroom which stands for eternity and it sparkles with 24,679 diamonds on it. Named ‘The Touch of Ami’, this ring has made a previous record of a ring with 12,638 diamonds become yesterday’s story. Ms Rijisha TV, a postgraduate in lifestyle accessory design, from the National Institute of Design has meticulously designed ‘The Touch of Ami’ and Guinness World Records entered it in the ‘Most Diamonds Set in One Ring’ category. It took 90 gruelling days to achieve this milestone. Capestone, the holding company behind SWA Diamonds played a major role in winning the global award.

SWA officials are immensely proud of the fact that this feat was achieved in Kerala, a place with a sizeable number of diamond and gold consumers, but with very less jewellery manufacturing units. It is indeed a great achievement that this award-winning jewel has come from this state and has won this prestigious title over countries like Belgium which dominate the diamond industry worldwide.

”It is our privilege and honour that this ring was made in India and also the owner of the ring is an Indian. ‘The Touch of Ami’ also marks the triumph of entrepreneurship in the diamond sector of our state,” says Abdul Gafur Anadiyan, MD of SWA Diamonds.

Capestone, which has been a major player in the gold-diamond-platinum ornament manufacturing domain for the last two decades, launched the SWA Diamonds brand in 2019. Even though the challenging Covid-19 pandemic situation, the company managed to launch the SWA Diamonds brand in more than 150 stores, within a short period of two years, say the owners. SWA Diamonds have made it possible to present world-class and uniquely designed diamond jewellery for consumers across the world.

With Inkel Educity Malappuram, a government undertaking, holding this world record, it is expected that this achievement will attract more investment to the high growth industry of the diamond ornament manufacturing business in India.