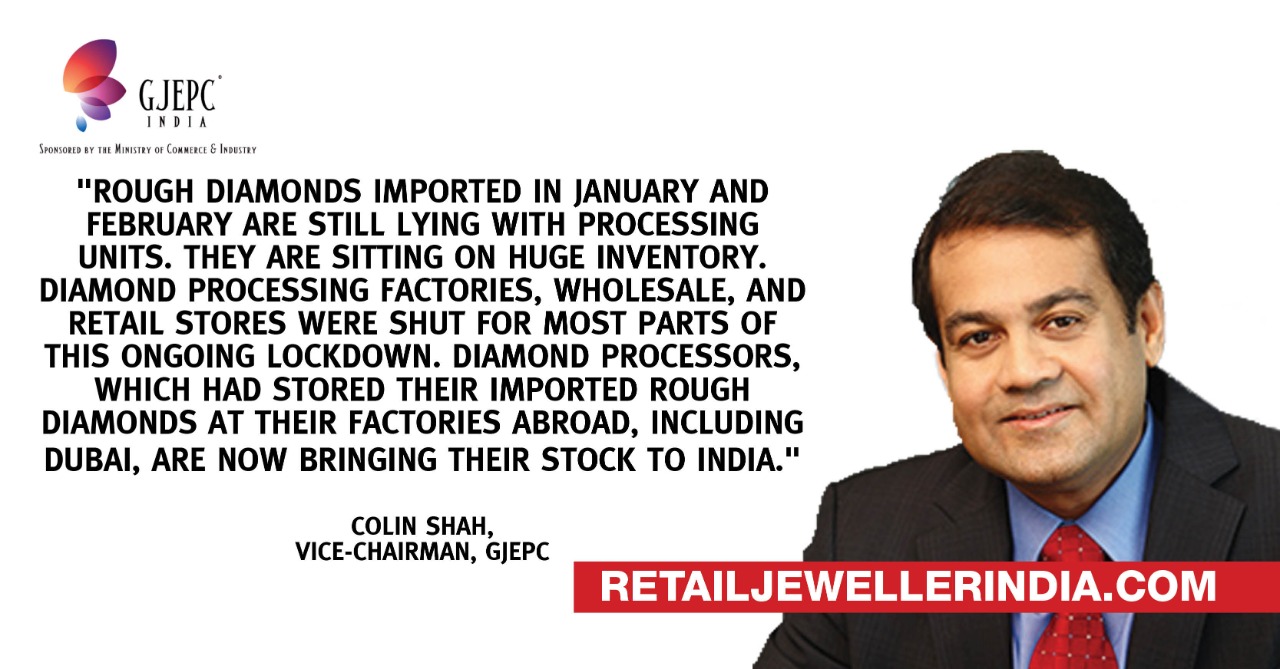 Being the world’s largest diamond processing hub, India imports around 95 per cent of rough diamond mined globally for processing in local units

The apex industry body, Gem and Jewellery Export Promotion Council (GJEPC), has called for the voluntary moratorium to help Indian processors ease their inventory. With demand for diamonds expected to decline in the monsoon season, the moratorium will offer time to processing units to restore their business activities for a demand revival during Dussehra and Diwali.

Exports, too, have been hit because of the lockdown, even as shipments have been sent to Hong Kong this month.

“Rough diamonds imported in January and February are still lying with processing units. They are sitting on huge inventory,” said Colin Shah, vice-chairman, GJEPC. Diamond processing factories, wholesale, and retail stores were shut for most parts of this ongoing lockdown.

The moratorium has prompted De Beers, one of the largest rough diamond miners in the world that contributes around 20 per cent of the total supply, to cut its production estimates to 25-27 million carats for the calendar year 2020, from 32-34 million carats earlier.

Other global miners, including Alrosa and Rio Tinto, too, have revised their production forecast for CY20 to avoid inventory building and distress selling. “Diamond processors, which had stored their imported rough diamonds at their factories abroad, including Dubai, are now bringing their stock to India,” said Shah.

“Workers have returned to their hometown. Hence, diamond processing factories are witnessing an acute shortage of skilled workers. Since their return seems remote, the voluntary moratorium not only should be made compulsory but also extended to three months. Less import of rough diamond will likely create pressure on mining companies to sell at a cheaper price,” said Pravin Nanavati, a Surat-based diamond merchant.

The fourth phase of the lockdown (between May 18 and May 31) has allowed diamond factories to start operations with 10 per cent manpower in Red Zones like Mumbai, only to fulfil the export commitment.

With this, export units in the Santacruz Electronics Export Processing Zone (SEEPZ) and Bharat Diamond Bourse have started operations. Export activities have started for key destinations, such as Dubai, mainland China, and Hong Kong.

Being the world’s largest diamond processing hub, India imports around 95 per cent of rough diamonds mined globally for processing at local units.

Nanavati said India’s diamond jewellery exports is likely to remain weak this year because of lockdown and economic slowdown/recession in key markets, such as the US (the largest jewellery importer from India and the world’s biggest consumer with a 40 per cent market share), European countries, West Asia, China, and Hong Kong. India’s domestic diamond jewellery demand is paltry.