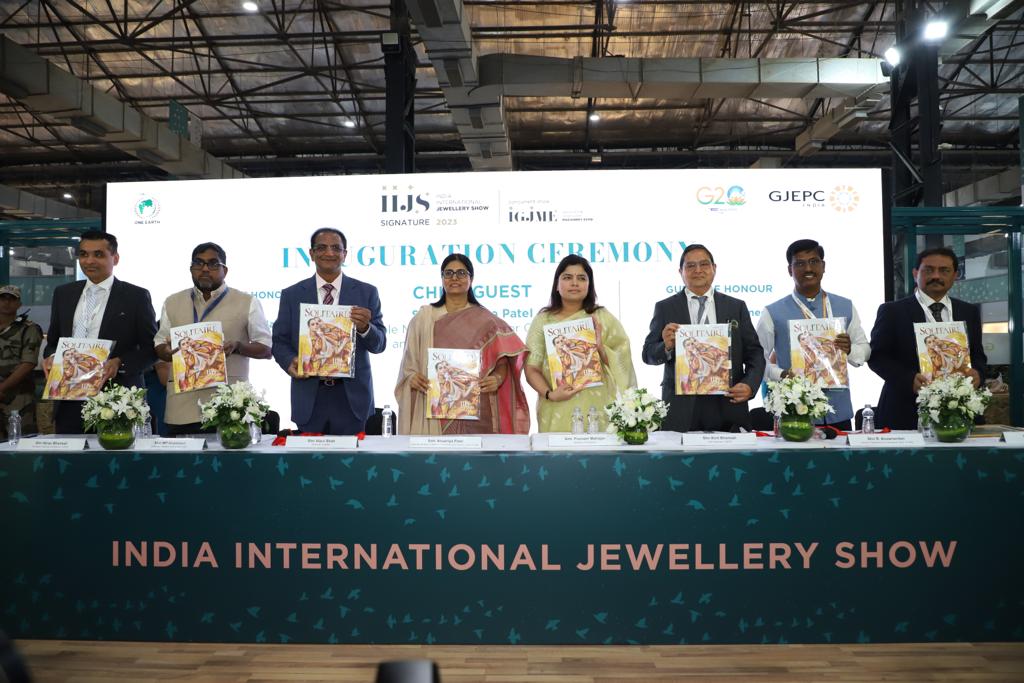 IIJS Signature 2023 is bigger, better, greener with “ONE EARTH” Initiative For A Greener Planet“

The 15th edition of IIJS Signature is the biggest-ever and is as large as the IIJS Premiere, which is usually held in August each year. Given the bigger format of the show, IIJS Signature has been extended to five days instead of four, so that visitors and exhibitors are not hard-pressed for time to cover the entire show floor of six halls encompassing 65,000 sq. ft. IIJS Signature will accommodate more than 1,300 exhibitors spread over 2,400+ booths. IIJS Signature will see 24,000 visitors from 10,000 domestic companies attending the show. GJEPC has introduced a new section for lab-grown diamonds. IGJME is concurrent show with 90+ companies, 115+ booths @ Hall 7.

Chief Guest Smt. Anupriya Patel, Hon’ble Minister of State for Commerce and Industry said, “Effort made by GJEPC to make the 5-day IIJS Signature show bigger, better and greener is truly praiseworthy and commendable. IIJS Signature has given an opportunity to indigenous jewellers from diverse parts of the country to showcase their versatile collections to international buyers from 50+ countries.

With $40 billion worth of exports, the gems & jewellery sector is a prominent contributor to growing Indian exports year on year. India has just signed two significant FTAs with UAE and Australia, which has resulted in strong double-digit growth in exports to these countries. Talks are going on with Canada, EU and UK and Piyush has promised to operationalise two more FTAs this year. IIJS Signature has always had a rich legacy and this ‘green’ expo edition is special as it has special booth for women entrepreneurs and showcase for budding jewellery designers.

Poonam Mahajan, Hon. Member of Parliament, said the next 25 years after Amrit Mahotsav celebration should see India as the global leader and hub in gem & jewellery exports. She said that Bharat will be a Kohinoor in the global gem and jewellery business. “The new Jewellery Park in Navi Mumbai will make Maharashtra and India a global leader. It is estimated to generate 1 lakh jobs in this sector,” she opined.

MP Ahammed, Chairman, Malabar Gold & Diamonds, said, “GJEPC has helped regional jewellers with a global platform to fulfil Prime Minister’s vision of taking Indian jewellers from every corner of the country to the global market. We believe in Make in India and Market to the world concept.”

Mr. Vipul Shah, Chairman, GJEPC said, “India is a world leader in diamonds, gems & jewellery and GJEPC has earned the title of being the most proactive EPC in India due to several initiatives such as IIJS, international exhibitions and promotions. This year, the show has become bigger, better and greener than ever before. India’s overall gem and jewellery exports in this year saw a growth of 8.26% as compared to last year. The last quarter of this fiscal year is very crucial as it demands a strong growth to achieve this year’s target of USD 45.7 billion. Post the operationalisation of India-UAE CEPA, the gem & jewellery industry witnessed around 25% growth in exports to UAE. And now with India-Australia ECTA, we will witness similar growth in exports to Australia in the coming months. We also look forward to the FTAs with UK and Canada.”

Talking about GJEPC’s recommendations for the Union Budget 2023-24, Mr. Shah said, “Reduction in Import Duty on gold, silver and platinum to 4% is our prime demand to the government, as it is draining off the capital from the exporters and is the generator of economic malpractices of all kind. One of the requests is to allow the sale of rough diamonds in the Special Notified Zone through the Safe Harbour rule by diamond companies. At least 20% of the rough diamond trade in the world will be shifted to SNZ in India due to the level playing field given to the foreign mining companies.”

Mr. Shah added, “Among the other recommendations for budget 2023-24 are: reintroduction of Diamond Imprest Licence to give the diamond exporters the leverage to cope up with the beneficiation policies undertaken by major mining countries in Africa; introduction of Repair Policy for Jewellery to transform India to become the repair hub of the world; abolition of Import duty on LGD seeds and investment in different measures to make the LGD manufacturing sector in India a leader in the same manner as we rein natural diamond processing sector. This will make India process the entire supply chain in the country itself.”

Mr. Nirav Bhansali, Convener, National Exhibitions, GJEPC, said, “Since its inception 38 years ago, IIJS has surpassed its role as a conventional exhibition and has become the primary national platform for the Indian jewellery manufacturing industry to network with global retailers. This edition of IIJS Signature show has many new and innovative features. The Innov8 area in Hall 1, is hosting Seminars now re-branded as Innov8 Talks, which is open to all. This time, we tried to be more outward looking, and have brought in experts in other fields to share valuable insights with our members. At other times, the same square will host Innov8 LaunchPad, where new products will be unveiled by Signature exhibitors at designated time slots. For a glimpse of exciting new talent, I encourage you to visit the Design Gallery in Hall 5 featuring Budding Designers and Women Entrepreneurs. For the 1st time, we have a special section for the Sunrise sector Lab-Grown Diamonds with over 50 booths. It is the most sought-after product category today.”

Mr. Bhansali added, “Interestingly, you cannot spell ‘Signature’ without ‘nature’. I think this show was the perfect Launchpad for our pro-environment initiative, known as One Earth to reduce our carbon footprint through an aggressive tree plantation drive. One Earth is the Council’s first step towards making the IIJS shows completely carbon-neutral. We have already received commitments for planting 25000+ trees and we will cross 50,000 trees in this year. We have tied up with SankalpTaru Foundation for this process. Moreover, the current show we are experiencing is running completely on “green energy.”

GJEPC is taking all effort to make the show bigger, better and greener. GJEPC aims to make the IIJS shows completely carbon-neutral by 2025-2026, and are taking steps in this direction. Firstly, all booths at IIJS Signature are pre-fabricated to avoid any wastage. Secondly, for the first time ever, IIJS Signature will be using Tata Power Renewable Energy Ltd., which supplies power harnessed by solar and wind energy. Thirdly, and the most important initiative is One Earth! GJEPC is committed to contribute to Mother Earth while creating a conducive ecosystem for our gem & jewellery members. GJEPC is introducing “One Earth” initiative to treasure Planet Earth in association with Sankalp Taru Foundation. As part of this initiative, GJEPC aims to plant 50,000 trees in a year under this initiative.

GJEPC’s IIJS Tritiya in Bangalore is emerging as one of the best shows for the southern region. The show dates are 17th to 20th March 2023. With 1500+ booths and 800+ exhibitors, we expect IIJS Tritiya to be almost as big as last year’s IIJS Signature.