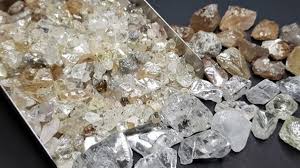 “At least 20% of the rough diamond traded in the world will be shifted to SNZ in India due to the level playing field given to the foreign mining companies,” GJEPC Vipul Shah said.  Shah was speaking at the India International Jewellery Show (IIJS Signature) and India Gem & Jewellery Machinery Expo (IGJME) at the Bombay Exhibition Centre in Mumbai in presence of Minister of State for Commerce Anupriya Patel.

“India is a world leader in diamonds, gems & jewellery and GJEPC has earned the title of being the most proactive EPC in India due to several initiatives such as IIJS, international exhibitions and promotions. This year, the show has become bigger, better and greener than ever before. India’s overall gem and jewellery exports this year saw a growth of 8.26% as compared to last year. The last quarter of this fiscal year is very crucial as it demands a strong growth to achieve this year’s target of USD 45.7 billion,” Shah said.

Patel said that India has just signed two significant FTAs with UAE and Australia, which has resulted in strong double-digit growth in exports to these countries. “Talks are going on with Canada, EU and UK,” she said, adding that Union Commerce and Industries Minister  Piyush Goyal has promised to operationalise two more FTAs this year.

MP Poonam Mahajan said that the next 25 years after Amrit Mahotsav celebrations should see India as the global leader and hub in gem & jewellery exports. “The new Jewellery Park in Navi Mumbai will make Maharashtra and India a global leader. It is estimated to generate 1 lakh jobs in this sector,” she opined. MP Ahammed, Chairman, Malabar Gold & Diamonds, said, “GJEPC has helped regional jewellers with a global platform to fulfil Prime Minister’s vision of taking Indian jewellers from every corner of the country to the global market.”

IIJS Signature 2023 will give Indian jewellers a good opportunity to showcase their versatile collections to international buyers: Anupriya Patel, MoS, Commerce and Industry