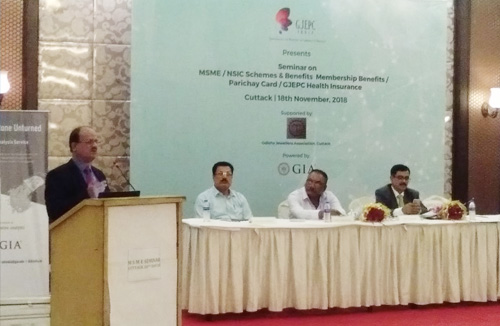 The Gem & Jewellery Export Promotion Council continued its pan-India awareness drive to encourage more and more jewellers, especially those from the MSME sector, to avail of various government schemes and enter the export sector.

Last week, two seminars were conducted in Cuttack, Odisha, which has recently been declared as an MSME Thrust Area for the G&J sector. The first was organised on November 13, by the office of the Jt DGFT Cuttack which had Jatindra Nath Swain, Addl. Secretary, Prabhari officer, Gems and jewellery, MSME as the chief guest. Around 70 jewellers participated. On behalf of the GJEPC, Nitin Khandelwal, Assistant Director gave a detailed presentation on the role of the Council in promoting exports and the services offered to members.

A few days later, on November 18 GJEPC conducted another seminar-cum-membership drive also in Cuttack which was attended by representatives of over 50 businesses. The seminar was addressed by the MSME Director of the region, the GM of NSIC and officials of the GJEPC. A representative of GIA also spoke on the occasion.

Prior to that, a similar MSME awareness programme and membership drive was also conducted in Pune, Maharashtra on November 16. Over 150 jewellers attended the event which was addressed by senior officials of the MSME and NSIC, as well as of Yes Bank and GJSCI.