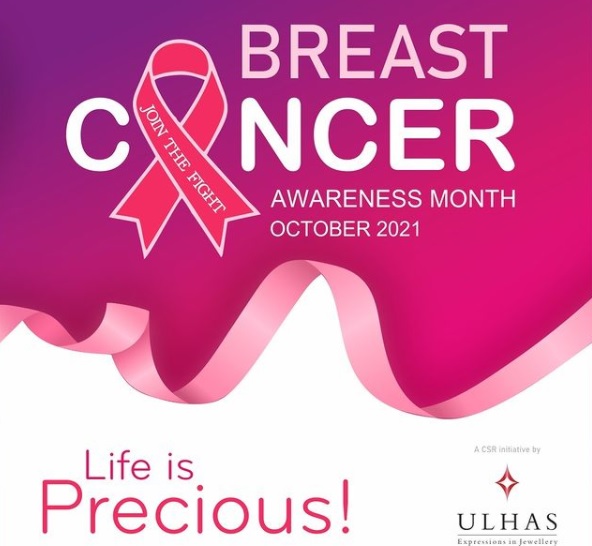 At a time when breast cancer is slowly spreading its roots around the world, Ulhas Jewellers has started spreading awareness about the disease, as part of its continuous campaign, during the festive season. The campaign, which the responsible jeweller has been running for the past seven years continuously, has been particularly effective in October, which, in addition to being the peak of the festive season, is also observed as breast cancer awareness month.

Breast Cancer in women has become a serious issue with 27% diagnosed cases, research shows that one woman gets diagnosed with breast cancer in every 4 minutes in India. However, the topic has not been discussed openly in the past, Indian society being very conservative.

The festive season normally attracts a higher footfall, when people throng jewellery shops in large numbers. Ulhas Jewellers feels that this is a good time to reach a larger audience, and so they begin the campaign every year in October.

The initiative has received a positive response over the years as many customers have come forward appreciating the jeweller’s efforts.

The campaign spreads awareness and urges people to stay aware and switch to a healthy lifestyle as the first step towards fighting breast cancer. In the past, Ulhas Jewellers has collaborated with medical agencies to provide free examination and private consultation with discounted cancer detection packages.

Vikram Verlekar, MD, Ulhas Jewellers said, “A change is lifestyle can make a huge difference in overall health and can help with health problems. Today, almost 50% of women avoid talking about it, especially breast cancer, due to their busy lifestyles. We need people to understand that regular self-examination can increase the chances of early detection which, in turn, can significantly raise chances of survival.”