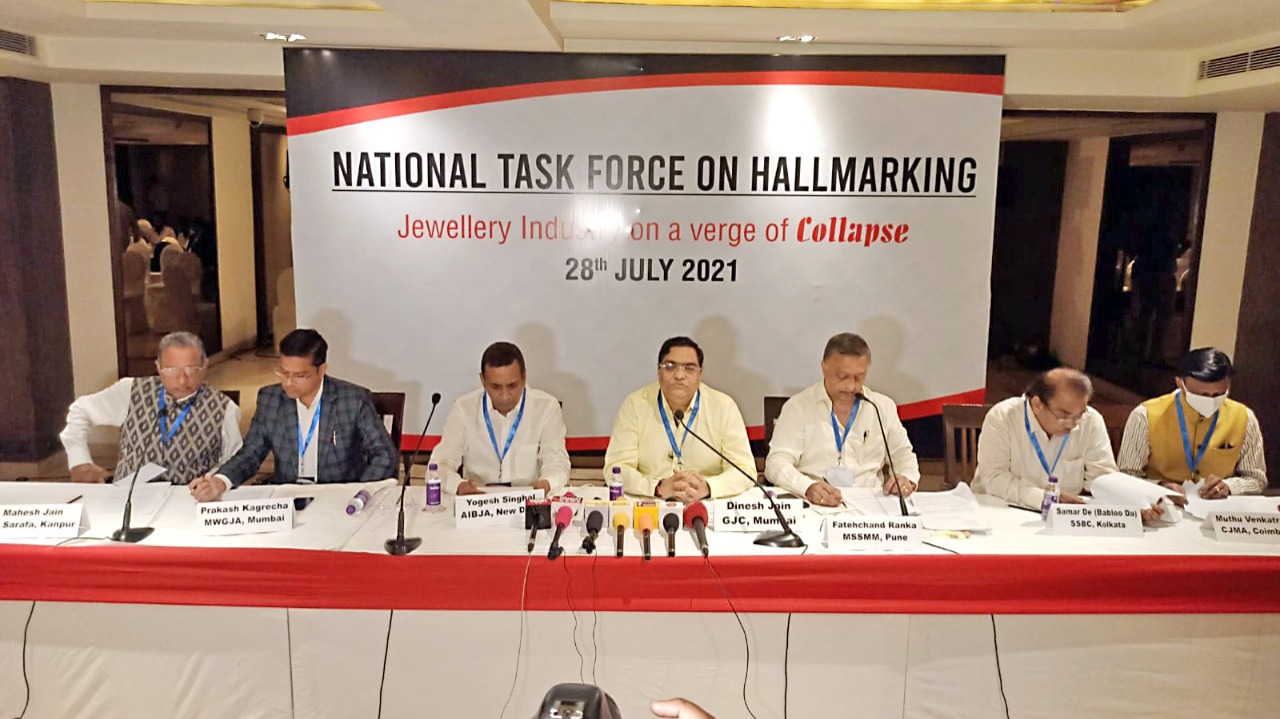 The National Task force was formed out of 350 Associations / Federations representing East, West, central, North and South zones of the entire Gems & Jewellery Industry.  The objective of this committee is to ensure a smooth implementation of mandatory hallmarking across the country.

Honourable Minister of Consumer Affairs, Piyush Goyal, virtually met the industry on 24th May 2021, wherein after realising the gravity of the matter, formed an Expert Committee of around 19 members from the Jewellery Industry to sit across with the DG BIS and discuss, deliberate the true concerns, and resolve the matter in next 3 consecutive virtual meetings.

A final meeting was called in Delhi on 15th June with all the members of the Expert Committee, BIS team and Honourable Minister Piyush Goyal, where he discussed, debated, and mandated the concerns to the satisfaction of the committee. It was also mandated that a High-Level Committee (HLC) be formed to structure the legal, was mandated in that meeting, create an SOP the same, as mandatory hallmarking was declared from 16th June itself.

The Ministry instead, formed an ‘Advisory Committee’ headed by DG BIS, with members comprising from BIS, various Ministries, export council, consumer forum and 3 members from the domestic Industry. As of today, post 3 meetings of the Expert Committee and 4 meetings of the Advisory Committee, barring a few issues, no substantial resolutions have taken place and nor any clarifications are being issued. BIS as an independent authority is only issuing FAQs, which has so many defects and ambiguities. It seems that the BIS is hell bent upon enforcing things in their own way, not realizing the gravity of the concerns of the industry.

From the 1st of July, while matters are still under discussion in the Advisory committee, BIS has arbitrarily imposed a new marking system which has no nexus between purity and standard of the Gold being used. This new marking has no relevance to the core objective of the BIS or Hallmarking, to ascertain purity of the Gold. The SOP formed to operate this new marking system has disrupted the entire industry and has brought the business on standstill. The hallmarking that used to be conducted within 2 to 4 hours is now being done within 5 to 10 days. The hallmarking centres are totally incapable to handle the pending stocks lying with jewellers for hallmarking. The pile up of pending stocks for hallmarking will take 5 years at this present operating speed, while the BIS continues to consider this as a teething problem.

Dinesh Jain, Director of All India Gem and Jewellery Domestic Council (GJC) representing MSME Sector& Core Committee Member of National Task Force on Hallmarking, said “The existing stock of approx. 5 crore Jewellery pieces are required to be hallmarked. At the current capacity of Hallmarking centres, 100,000 pieces per day, it will take around 500 days, equivalent to 18 months to hallmark the existing stock lying with jewellers and at peak capacity of hallmarking centre it would still require 250 days, equivalent to 9 months to hallmark the existing stocks. Question remains, when will be the new 12 crore pieces manufactured stock, this year be Hallmarked, worth 4,50,000 crores, considering market size of 900 tonnes. This will eventually lead to collapse of the industry.

Jain further said, “It is unfortunate, that jewellers require registration to sell quality product to consumers, which is unimaginable. Cancellation of registration on petty issues for mere element of non-cooperation, of civil in nature and search & seizure procedure and criminal penal provisions for a civil offense will bring about ‘License Raaj’ once again and jewellery industry will be exposed to corruption. Why is a criminal liability imposed on the jeweller who is merely selling the jewellery and have neither produced nor hallmarked the Jewellery? This is unreasonable, arbitrary and bad in law, when a jeweller has followed all the protocol issued by BIS to get a jewellery hallmarked.”

Fatehchand Ranka, President, Maharashtra Sarafa Swarnakar Mahamandal and Core committee member of National Task Force on Hallmarking, said, “During the 40 days of the mandatory hallmarking regime, 72 hallmarking centres has been either cancelled or suspended across the country.  Previously, out of 933 centres, almost 450 centres were suspended. This shows that one out of two AHC was either cancelled or suspended for contravention of law. How can we rely on such system and such Hallmarking centres and become victims of their failure?

Ranka further said, “The New marking system under the guise of HUID has been introduced to monitor hallmarking centres. It is unwanted that jewellers have been dragged into the administrative process of HUID, which has no relevance to the purity, which is serious concern for the industry to conduct their day-to-day affair. How can we as jewellers accept such frivolous systems and processes adopted by BIS and allow our customers to become victims of the same.

Yogesh Singhal, President, All India Bullion & Jewellers Federation and Core committee member of National Task Force on Hallmarking, said, “When an independent third party does the assessment or certification of a product, how can the first party be made responsible for the same? What kind of laws are these? The present BIS Act is making the jeweller responsible for a failure in purity of an item of jewellery after it is hallmarked by a hallmarking centre. While the industry has been continuously objecting to this with the BIS and till today, no action has been taken and the jeweller has been made a soft target.

Singhal further said, “For the last 20 years of voluntary hallmarking, BIS applies 4 marks that identifies the purity, jeweller, hallmarking centre and BIS. This is also the standard accepted norm, followed across the globe. I do not understand, what were the failures of the previous hallmarking system and why the new marking system / HUID and process was required to be replaced? If there was any failure of previous system, who will be responsible for millions of jewellery pieces which were hallmarked previously and shall remain in circulation for decades and who will be the victim of those blunders? Will you also make the Jewellers responsible here! If there was no failure of the previous hallmarking system, then why is this new marking / HUID is being imposed, when entire jewellery sector is opposing this.”

In conclusion, the Task Force states that BIS cannot change the tradition and fabric of the jewellery industry by putting the livelihood of lakhs of jewellers at stake and thus affecting crores of dependents.  Only handful of few corporates and large retailers will survive, while the rest of the jewellers will have no choice and will be compelled to wind up their business.

The members of the National Task Force on Hallmarking consist of the following delegates of the G&J Industry: