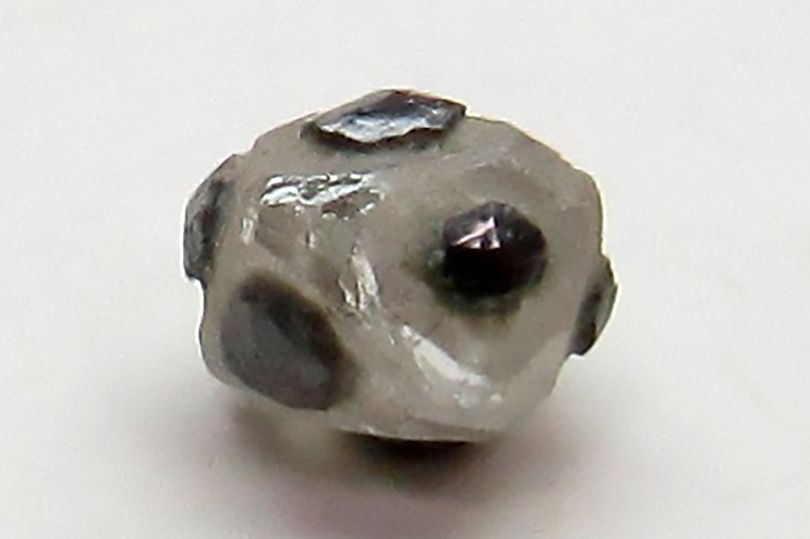 An unusual football-shaped diamond has been found in Russia during the country’s staging of the 2018 World Cup.

The rounded diamond is mostly white in colour, with small black spots on its outside.

It was discovered at a diamond mine belonging to the Alrosa diamond mining group in Russia’s Arkhangelsk Oblast region.

Experts described the unusual shape and pattern on the diamond as a “bizarre” natural creation.

Some have said the small rock resembles the classic Adidas Telstar football first used at the 1968 Euros in Italy and the 1970 World Cup in Mexico.

Alrosa is to name the diamond in honour of Russian goalkeeper Igor Akinfeev, 32, whose heroics allowed the country to knock out Spain on penalties in the Round of 16 stage of the World Cup.

While the diamond might look like a football, it measures just a fraction of the size, measuring just 3.5 by 3.2 millimetres and is estimated at 0.5 carats.

Alrosa company head Sergey Ivanov said: “Despite its small size it is a unique discovery. Nature creates various bizarre forms, but this is the first time we see a football-shaped diamond.”

The discovery has been met with a mixed reaction from commentators such as ‘Toypursh’ who said: “Yeah, looks like a real diamond”, and ‘Order’ who asked: “This is what you call a football?! Have you ever seen a football actually?”

The Russian Federation is the largest diamond-producing nation in the world and Alrosa is its leading company, accounting for 95 percent of the country’s production.

Alrosa has the world’s largest rough diamond reserves, sufficient for at least another 18 to 20 years of production.

Unfancied Russia did far better than expected in the World Cup before going out on penalties in the quarter-finals to Croatia who will face England in the semis.

Tanishq launches campaign amid rise in sales of synthetic diamonds