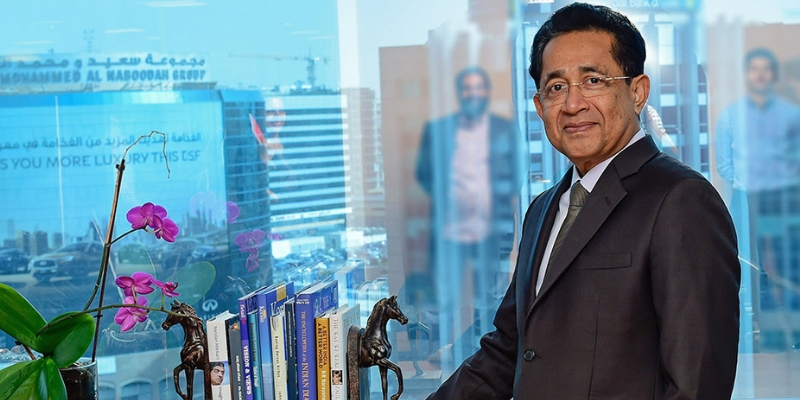 Remember the story of King Midas who wished everything he touched would turn into gold? We all know that story did not end well, but not this Indian businessman’s tale.With a similar ambition, just an extra touch of magic, Joy Alukkas, chairman and managing director of jewellery chain Joyalukkas Group has made an astounding success of his career graph.

And to think he did it from humble beginnings right here in the UAE, makes the story even sweeter.

‘Joy Alukkas’ is a household name. Every Indian, people from the sub-continent and those who love the yellow metal – know him well enough to be the successful jewellery magnate of UAE.

Alukkas’s personal net-worth stands at a whopping $1.3 billion. He is regarded a pioneer in setting the trend for a jewellery chain in the country and introducing classic ‘desi’ designs into the local market.

The group records an annual turnover of $2 billion with a presence in UAE and 10 other countries. Plans are to reach a turnover of $3 billion in 2020 and expand the business to 20 countries with 200 retail outlets. Joy Alukkas has since the firm’s inception 32 years ago, turned the group into a conglomerate, spanning money exchange, a textile showroom among others.

So when this business tycoon –the man with the Midas touch – makes his way to the interview room, we are pleasantly surprised by his rather quiet demeanour. As we get to know him a little bit, we realise his soft persona deftly hides a burning ambition, an unrelenting drive and astute business skills. It is no wonder he is a success story in the UAE.

Alukkas has been dressed with a number of awards and titles. To name a few, he received Dubai Quality Appreciation Certificate from His Highness Shaikh Mohammad Bin Rashid Al Maktoum, Vice-President and Prime Minister of the UAE and Ruler of Dubai, ‘The Business Excellence Award 2016’ from Shaikh Nahayan Mabarak Al Nahyan, UAE Minister for Tolerance.

So what contributed to the massive success of this Indian businessman who, from being a college drop-out turned a multi-billionaire?

“Ambition, ambition, ambition. I have always worked around a goal. If today, Joyalukkas is a home-grown brand, it is because I have put my sweat and toil into making it a name to reckon with. We also added innovative strategies, tapped into the variety of opportunities the country offers to make a success of the empire,” he said.

“Indians and people from the sub-continent love gold and diamonds. Let’s just say they adore it. They are not just decorative pieces of ornament, but an investment tool as well. They are must haves in practically every household. So the demand is definitely here in the UAE.”

When it all began

In 1987, Joy Alukkas decided to come to the UAE and explore the jewellery market here.He took his first flight to Abu Dhabi with several trepidation playing in his head. “I was visiting a new city, new country, entering a new market, so naturally I was anxious. Little did I know the UAE would welcome my revolutionary strategies for the industry with such open arms.”

Things changed as soon as he stepped out of the plane as he felt a surge of positivity take over his fear. “The air was clean and fresh. It felt like the beginning of a new chapter in my life. ”

His (Joy Alukkas) father started the first jewellery showroom in 1956. It was a modest business in Trichur, Kerala. The ‘Alukkas brand’ was not well-known back then as it is today.

Jewellery was not the primary business for the family. Entering the line was in fact an off-shoot of the family’s business strategy to diversify its portfolio which — quite unexpectedly — focussed on umbrella manufacturing and stationary.”

“As you know the state of Kerala receives high rains every year. So umbrella manufacturing was our prime focus of business. Towards the 70s, my father handed the jewellery business to my four brothers and myself,” said Alukkas who is one of the 18 children of his parents.

“I completed my education till grade 12. I dropped out of college to join my father in his business. We brothers were excited about entering the jewellery business because we could sit inside air-conditioned rooms to greet customers, which was a treat for us!”

Fast forward, today is a different story altogether and Joy Alukkas is by far the most successful businessman of the brothers.

As if angels handed him a magic wand, Joy Alukkas turned a ‘not so thriving family business’ into a massive empire. And he did it with vision, hard-work and keen business strategies.

“My success did not come overnight however. There were challenges but I faced them head on.”

He admitted when his father handed him the responsibility of running the business in the Gulf, he felt a bit short-changed. “I had not landed in the city yet so I did not know what it would be like doing business here. I felt I was handed a raw deal in life. But look at how things have changed!”

In 1987, Alukkas decided to take the big leap into the UAE market to open his first outlet in Abu Dhabi. The same year he opened another showroom in Dubai. The third was in Sharjah in 1991, just after the Gulf War.

His first big break-through however came in 2000 when the five brothers decided to part ways and split their family business.

“We took a piece of the business and went our separate ways. The distribution of the business was according to zones where we lived. For example, one of my brothers lived in Calicut so he took the business in that area. I was handed the responsibility of the three outlets in UAE and the rest is history.”

Nineteen years on, Joy Alukkas is way ahead in the game from his brothers.

“Around the year 2000, banks also started giving loans to jewellery retailers which was not the case before. This majorly helped my business to grow.”

After the split, Alukkas changed the group’s branding to Alukkas International, just to differentiate his business from that of his brothers.

“One day I was driving near Shindaga tunnel when I came across a Majid Al Futtaim board. It struck me at that moment to change my company branding again to ‘Joyalukkas’. I had a good feel about this so I called my staff to arrange all the necessary paperwork for this. The magic began then.”

Soon he was opening one outlet after another. It was the start of his stellar business growth. “There was also little competition with small retail outlets operating at that time and no established jewellery retailer in the market. On top of this, there was no one selling classic Indian designs, so we jumped into this market.”

The company made some innovative marketing strategies too along the way that did a lot for the company’s branding and presence.

“For example, Joyalukkas was the first jewellery retailer to gift a Rolls Royce as part of the raffle draw. We also signed Indian film stars to represent our company and be our ‘Brand Ambassadors’. We were also the first jewellery brand to advertise in a cinema theatre.

“Every morning I wake up thinking what next. Globalising a home-grown brand speaks a lot about the massive support I have received from the people in the UAE. It has been an incredible journey for me to say the least,” said Alukkas. “Definitely UAE has been one of the best markets for me. There are no political or tax concerns to deal with. UAE is a dream place to be for entrepreneurs. Added to this, the country’s rules and regulations monitoring the jewellery industry helps set ups like us to run our business in peace. There is ease of documentation process, no dearth of retail spaces for leasing, everything is par excellence here.”