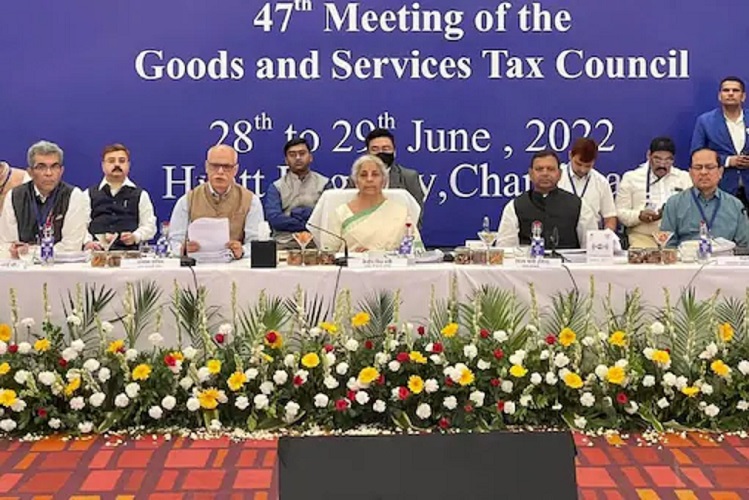 The GST Council during its two-day meeting, which has started on Tuesday, has so far decided to accept the recommendations of three groups of ministers (GoMs) constituted on rate rationalisation, GST system reforms, and the movement of gold and precious stones, sources told CNBC-TV18. The Council had constituted various GoMs to study various issues and submit reports to it for final decision.

The GST Council has accepted the interim report of the GoM on Rate Rationalisation, according to the sources. The group of ministers was constituted in September last year and was headed by Karnataka Chief Minister Basavaraj S Bommai.

The rate correction has also been proposed on solar water heater and system, finished leather and composition leather, works contract supplied, and tailoring & other job works for textiles, from 5 per cent to 12 per cent, they said.

The Council has accepted GoM’s recommendations on revising GST exemptions and re-fitting the commodities based on suitable rates, such as unroasted coffee beans, unprocessed green leaves of tea, wheat bran, de-oiled rice bran at 5 per cent. The GoM proposed to withdraw exemptions from cheques, lose or in book form and to be taxed at 18 per cent. It also included withdrawing exemptions of a lower rate for e-waste from 5 per cent to be hiked to 18 per cent.

The report also included withdrawing exemption of reduced rate of 5 per cent to goods related to petroleum/ coal bed methane.

Other exemptions accepted for withdrawal included the reinsurance of exempted insurance schemes, transport of passengers in business class from airports located in North east states, transportation of newspapers, magazines, railway equipment by rail/ vessel/ road, services by RBI, services by IRDAI to insurers, services provided by Sebi, services by way of registration/ licensing supplied by FSSAI to Food business operators, services by GSTN to government.

They also include hotel accommodation below Rs 1,000 per unit per day to be taxed at par with others at 12 per cent, hospital rooms, except ICU with daily rent of Rs 5,000 to be taxed at 5 per cent without ITC, exemption to cord blood banks to be withdrawn, renting of religious place meant for general public if the per day rent is above Rs 5,000 per day and shops with rent of more than Rs 2,500 per month.

The GST Council has agreed and accepted to adopt the GoM’s Report On GST System Reforms, the sources told CNBC-TV18. The GoM was constituted in September last year under the convenorship of Maharashtra Deputy Chief Minister Ajit Pawar.

The GoM’s recommendations were: Using mandatory biometric authentication for high-risk applicants for registration under GST; and identifying risky behaviour of the new registrants/ applicants using artificial intelligence and place the information on the back office for the field officer to carry out mandatory physical verification of these taxpayers.

The GoM report also said the CA number will be verified to improve the quality of registered addresses in the GST system. It also suggested real-time validation of bank accounts through integration of GST system with NPCI. It said the outcome of the verification will be made available to the tax officers, the sources said.

The GST Network, the IT backbone of the GST regime, will take necessary steps to make available information related to: all bank accounts against a particular PAN; and for the development of feedback mechanism for capturing the feedback of leads generated by systems to alert tax authorities.

GoM On The Movement Of Gold and Precious Stones

The GST Council has also accepted the recommendations of the GoM constituted on the e-way bill generation for gold/ gold jewellery and precious stones, the sources said. It was constituted in February this year with Kerala Finance Minister K N Balagopal as its convenor.

It recommendations included allowing states to impose the requirement of e-way bill for intra-state movement of gold/ precious stones, if they so want.

The GoM also recommended a minimum threshold of Rs 2 lakh, above which states can decide any amount as threshold for generation of e-way bill for the intra-state movement of gold/ precious stones.