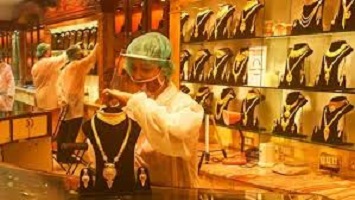 In global markets gold prices continued their rally, edging closer to a eight-year high as surging coronavirus cases across the world dented optimism about a quick global recovery. This benefited safe harbours like gold, bonds and the US dollar. Spot gold rose 0.1% to $1,772.61 per ounce. Among other precious metals, platinum rose 0.6% to $796.07 and silver climbed 0.6% at $17.85.

The death toll from COVID-19 around the world reached half a million on Sunday while overall cases surpassed 10 million. The US, the world’s biggest economy, accounts for about one-fourth of total global cases and deaths. California, most populous US state, on Sunday ordered some bars to close, the first major rollback of efforts to reopen the economy as covid cases soared nationwide.

Gold traders will be keeping close watch on Federal Reserve Chair Jerome Powell’s testimony on Tuesday and US payrolls data due on Thursday.

Gold is used as a safe investment during times of political and financial uncertainty.

Gold prices have rallied 17% this year in global markets as governments and central banks announced unprecedented stimulus measures to prop up the economies battered by the pandemic. Many analysts remain bullish on gold despite the sharp gain this year. Goldman Sachs Group Inc. now forecast it’ll hit a record $2,000 an ounce in 12 months.

Meanwhile, investment demand for gold remained strong though physical demand remained muted in many parts of the world. The holdings of SPDR Gold Trust, the world’s biggest gold ETF, rose 0.3% to 1,178.90 tonnes on Friday.