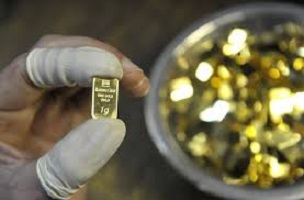 Gold eased back on Friday from its highest in nearly two weeks, as investors grew hopeful about economies reopening after COVID-19 lockdowns, but a continued wave of central bank stimulus kept bullion on course for a weekly gain.

Also limiting gold’s appeal, slightly better-than-expected data from the United States showed job losses in April hit 20.5 million, less than the expected 22 million. The unemployment rate was 14.7%, lower than the market forecast of 16%.

Still, overall the U.S. economy suffered its steepest monthly plunge in payrolls since the Great Depression, the starkest sign yet of how the novel coronavirus pandemic is battering the world’s biggest economy.

“Even though the jobs number was clearly dramatic – the worst number we ever had as a nation – on the back of that we see slight bit of optimism moving forward with the economy reopening slowly here in the U.S.,” said David Meger, director of metals trading at High Ridge Futures.

The April nonfarm payrolls data lifted the U.S. stock markets adding to optimism from easing in tensions between Washington and Beijing. [.N]

Wall Street’s indexes are on course for their first weekly increase in three, as investors pinned their hopes on supply chains coming back on track and a revival in consumer spending after several U.S. states reopened economies.

However, “the primary drivers for strength in gold – interest rates at zero, massive spending and deep concerns about a second wave of infection – remain powerful so gold’s prospects remain strong over the medium term,” said Tai Wong, head of base and precious metals derivatives trading at BMO.

The latest batch of week U.S. economic data fueled expectations of more stimulus from the Federal Reserve, with markets pricing in a negative interest rate environment.

Sino-U.S. friction appeared to ease after Beijing said trade negotiators from both countries had agreed to improve the atmosphere for implementing a Phase 1 deal, days after U.S. President Donald Trump threatened new tariffs.