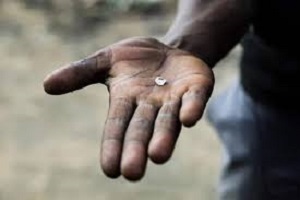 Acommotion has erupted in the diamond hubs in Surat and Mumbai after Chinese authorities reportedly carried out raids following the recent arrest of a local couple on the charge of smuggling diamonds.

A Gujarati diamond merchant was grilled by the Chinese authorities and released on Tuesday night, reported The Indian Express. The Gems and Jewellery Export Promotion Council (GJEPC), Gujarat Zone, has now sought help from the government to help diamond merchants from India in Hong Kong.

On August 10, a Chinese couple employed at a courier firm in Hong Kong as delivery executives were reportedly arrested by Customs Ministry officials after they failed to produce papers regarding Customs duties. Officials found 150 packets of polished diamonds on them. The diamonds were allegedly being smuggled to Shenzhen along with a small diary with names and details of the parties that had given them the diamonds and those for whom the precious stones were meant, the report added.

Over 120 Chinese executives have reportedly been picked up for questioning and taken to Shenzhen after the questioning of the couple.

“We have come to know that Chinese officials have picked up 120 people in raids carried out at various places in different cities so far.” Claiming a Gujarati trader had been questioned, he added, “We request the Government to send a message to the Indian Embassy and instruct them to help the Indian diamond traders there,” GJEPC Gujarat Zone Chairman Dinesh Navadia told The Indian Express.

The publication further quoted a Surat diamond merchant with trading offices in Hong Kong, Shenzhen and Guangzhou. He said, “Through our sources, we have come to know that the Customs department of China had started a drive in mid-August and were keeping an eye on the movement of diamond parcels from Hong Kong to different cities in China. We have come to know that on Wednesday they started raiding diamond traders and jewellery manufacturing offices in eight cities in China like Shenzhen, Shanghai, Guangzhou etc. We are waiting for a clearer picture.”

Back in January 2010, Chinese Customs officials had held 22 diamond merchants from Gujarat on similar charges, out of which, thirteen of them were brought back after then prime minister Manmohan Singh and then Gujarat chief minister Narendra Modi intervened.

As China has emerged as a hub of manufacturing of diamond jewellery, smuggling from Hong Kong to mainland China has become a regular practice for the evasion of Customs duty of 4%.

From investment banking to jewellery designing, how this woman found her mojo as an entrepreneur