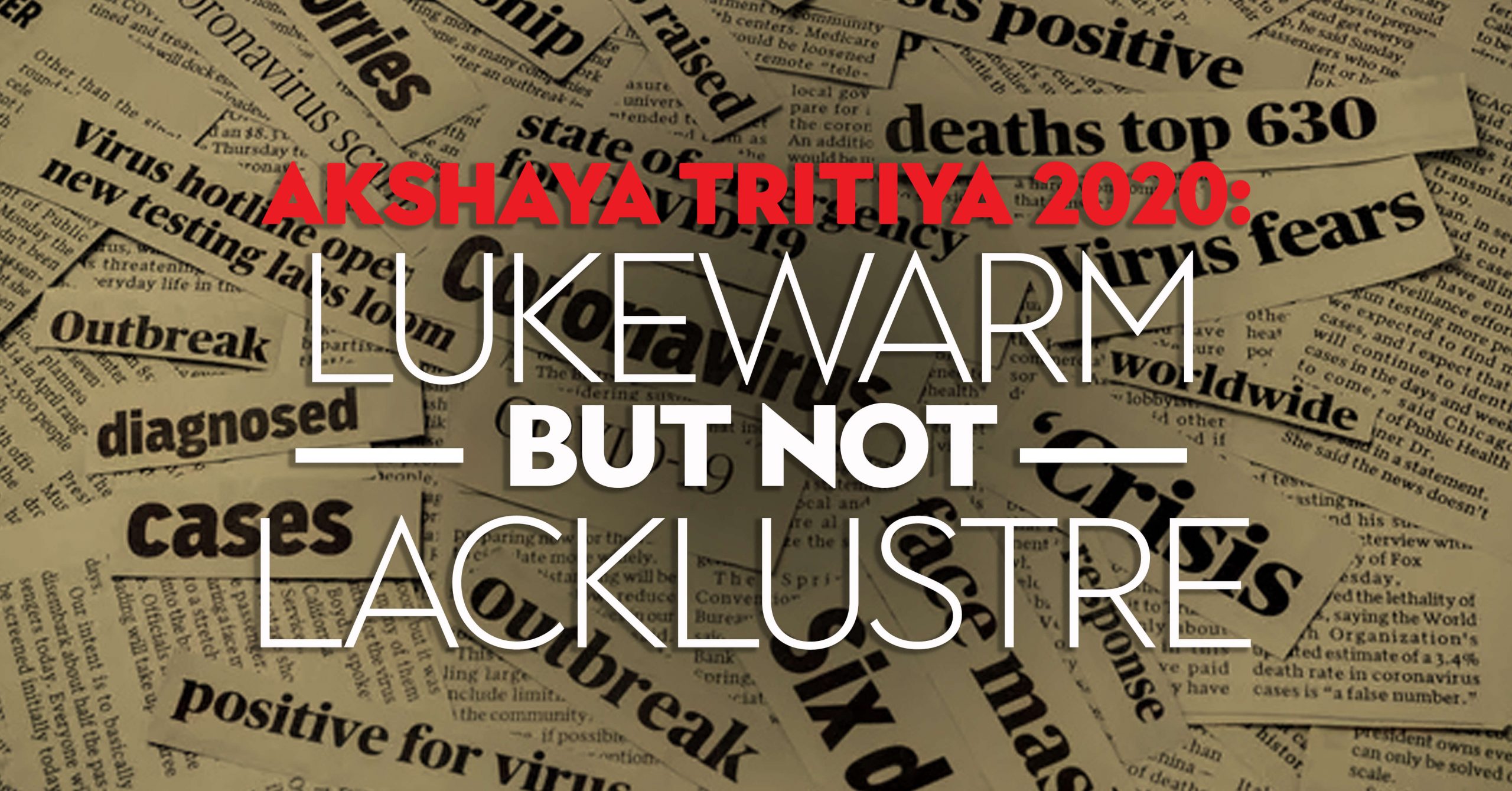 This year on Akshaya Tritiya jewellery sales was nothing as compared to previous years. But it can be safely said that Akshaya Tritiya has delivered more than what was expected, braving the twin-pronged setback – the Corona crisis and high gold rates.

India has been locked down indefinitely. No one knows when life will be back to normal. But as we say the show must go on, the alternatives have taken centre stage. As a result, this year’s Akshaya Tritiya was totally focused on e-commerce, social media and telephonic sales. Like every year, there was no dearth of attractive offers and lucrative schemes. Surprisingly, even as the sentiments are low, the efforts seem to have relatively paid off. The sales figure may be nothing in comparison to previous years, but this Akshaya Tritiya celebrated in the light of lockdown and shops with rolled down shutters, has reaffirmed consumer faith in the asset value of the yellow metal and given a much needed fillip to both jewellery and bullion sales.

Traditional buyers who were until now reluctant to explore any other medium to buy jewellery, made their bookings, though token purchases, through online stores, phone and social platforms.

According to AVR Siddhanth, Director, AVR Swarna Mahal, Chennai, “Our customer relationship team received a huge amount of calls on the product offers during Akshaya Tritiya.” For Abhishek Chanda, Director, Kalasha Fine Jewels (Capsgold), Hyderabad, alternative sales channels worked well this Akshaya Tritiya. “We have received excellent response for our gold e-vouchers. All the information was available in our social media posts. The booking was also done on phone and video calls. This time we were able to achieve 25 per cent sales which is a good figure for us,” he adds.

Another happy jeweller Harsh Hemdev, Director, Ghanasingh Fine Jewels, Mumbai, who had sent out WhatsApp messages and posted promotional offers on social media, revealed that “We received a response of 15 to 20 per cent which is good under the current circumstances.”  Clearly, jewellers are going by the popular adage – something is better than nothing!

Alternate mediums have their own pros and cons. Pros which we keep reiterating that you can buy from the comfort of home and in today’s context, while maintaining social-distancing. But it looks like the cons have prevailed for some jewellers.

Initially, there was a good response as people looked interested to buy jewellery but only five per cent of the queries transformed into sales, rues Vivek Shekhar of Manohar Lal Saraf and Sons Jewellers, Meerut. “There were few customers who were demanding for the delivery of gold on Akshaya Tritiya day. Many customers felt reluctant to pay online and wait for delivery post lockdown,” he explains.

Amol Bansal, BK Saraf Jewellers, Lucknow, feels that lockdown has dampened buyers’ confidence. “With the number of queries, I received before the Akshaya Tritiya day, I was confident that business will be average if not good. However, on the Akshaya Tritiya day only three to five per cent positively responded. The apprehension of the customers to not own the product on the same-day was huge,” he points out.

Another jeweller Chanderkant Jain, Director, Nikkamal Jewels, Ludhiana, who promoted the offers only on social media, terms Akshaya Tritiya sales as average. “As the promotions were only done through social media, only six to 10 per cent of the customers had made booking with us,” he informs.

The poor economic sentiment coupled with physical inaccessibility of the stores restrained the buying enthusiasm on the auspicious occasion.  In the current scenario, Snehal Choksey, Director, Shobha Shringar Jewellers, Mumbai, feels that his company performed much better than the expectations. “If I compare the business with last year Akshaya Tritiya sales, then the amount is only 10 per cent because a majority of the people are not in the mood to indulge into luxury items. All the bookings were done through social media and bulk SMSes were sent to almost 1,500 to 2,000 customers,” he shares.

As per the retailers the purchase was mere tokenism.  Abharan Jewellers, Bengaluru, recorded online sales of only Rs. 65 lakhs. “It was only a symbolic purchase on account of Akshaya Tritiya. Indians like to buy jewellery after touching it and wearing it and that’s why, they won’t buy high-end or expensive jewellery online,” says Subhas Kamath, director, Abharan Jewellers.

This time on Akshaya Tritiya, jewellers rolled out amazing discount and making charge offers on bullion and jewellery with toppings of rate protection plan that drove sales and kept the relevance of the occasion intact even during lockdown.

Many retailers introduced schemes under which the customers can book a coin online and when the lockdown gets over, the coin can be exchanged with jewellery. Additionally, they offered price protection against any rise or fall of gold rate.

They even promised to refund excess amount in case of price drop and adjust making charges of gold coins against future purchase. These are some of the major factors that turned consumers in favour for bullion this Akshaya Tritiya.

Parag Chheda, Director, Chheda Jewellers, Mumbai, too got benefited from such a scheme. “We had provided online bookings and 40 to 45 per cent of only bullion sales were done and by looking at the current situation, the business we made was good,” he shares.

Aisshpra Gems and Jewels who had put up a similar offer saw maximum sales coming from bullion. “About 60 per cent of the booking was for gold coins and the rest was for jewellery. In gold coins, the purchase from 10 grams to 20 grams was more, whereas in jewellery customers booked till 50 grams,” says Director, Vaibhav Saraf.

Highlighting another reason for bullion to become a major attraction this Akshaya Tritiya, said that “Indians like to buy jewellery after touching it and wearing it and that’s why, they won’t buy high-end or expensive jewellery online and therefore, majority of the orders were received in gold coins and the Price Protection offer has definitely helped us to garner more eyeballs,” informs Director Subhas Kamath.” He offered Gold weight vouchers in small denominations.

But there were a few aberrations to this trend. For Ratnalaya Jewellers, Patna, a majority of the bookings were done for jewellery and that too wedding jewellery. Although the business was merely 25% of last year,  “If we segregate the numbers, then the bullion sales come to around 10 to 15 per cent, wedding jewellery 60 per cent and the rest were small-ticket jewellery items such as rings,” shares Director, Saket Keshari.

E-com – A gateway to new consumers

In the times of the Corona crisis, lockdown and social distancing, the miniscule sales on Akshaya Tritiya can pave the way for new mediums, especially e-commerce.

Many retailers acquired new customer thanks to the new online-buying trend. Besides, the emergence of new online offers encouraged consumers to transact with those hitherto unknown to them.

ORRA had a promising run this year on Akshaya Tritiya. Managing Director Dipu Mehta says that, “Akshaya Tritiya is a time when the customer is pre-disposed towards buying gold. To keep up the custom of buying gold on the auspicious occasion, we did see new and old consumers both use the e-commerce means to buy gold.”

Chaitanya V Cotha, Executive Director, C Krishniah Chetty Group, Bengaluru, acknowledges that their revenue this year has completely come from online sales. “Our online push has been excellent. We have has around 10 times visitors to our website compared to normal days. This year Akshaya Tritiya sales have been equal to 25 per cent of normal Akshaya Tritiya sales,” he informs.

But for most other players in the industry, apart from low sales, Akshaya Tritiya 2020 will be remembered for another reason; the opportunity cost of not digitizing the business to build consumer access to store inventory from anywhere anytime.

A century and half year old jeweller, C. Krishniah Chetty innovates in the times of Covid-19 Introduces contact-less Paper-GoldTM this Akshaya Tritiya and till June 30th