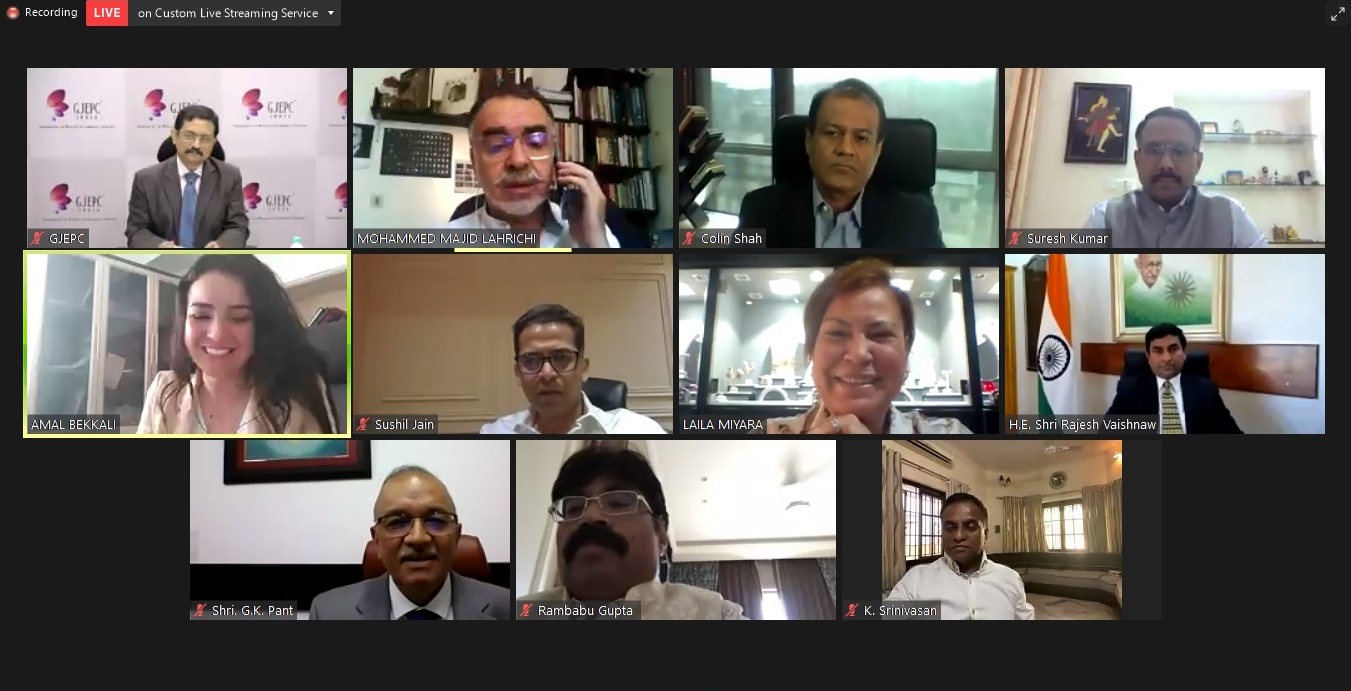 Mumbai: The Gem & Jewellery Export Promotion Council (GJEPC) and Embassy of India, Morocco, jointly organised the India Global Connect on 20th May, 2021. The objective of the meet was to understand the current business scenario with regard to the gem and jewellery sector and have discussions among manufacturers, exporters and importers of both the countries, and initiate a dialogue, explore trade opportunities and project India as a viable sourcing destination.

His Excellency Rajesh Vaishnaw, Indian Ambassador to Kingdom of Morocco, said, “India has been adding modern techniques with traditional know-how to bring it more in tune with the global market. Similarly, Morocco has been a jewellery powerhouse for many years, and the combination of low-cost and highly skilled workforce has made it a hub for the jewellery trade. Both countries can benefit tremendously by cooperating, collaborating, and exchanging ideas and expertise. Today’s webinar is a first step towards the same.”

Suresh Kumar, Joint Secretary, MoC&I, commented, “India Global Connect with Morocco should explore new avenues of trade and also try to understand consumer preferences to enhance the trade between the two countries. India and Morocco have enjoyed cordial and friendly relations and over the years the bilateral relations have witnessed significant depth and growth. However, the gem and jewellery trade between the two countries is insignificant, and we should work together to achieve $150 million trade in this sector.”

Colin Shah, Chairman, GJEPC said, “Exports/imports of gems and jewellery between the two countries is negligible and needs to be increased, which can enable India and Morocco in further developing their businesses and economy in terms of production, employment, new methods, techniques, etc. We should collaborate for skilling/training. I am happy that we had a very insightful and meaningful discussion today.”

The bilateral trade between the two countries amounts to $2 billion and if the potential synergies are tapped through cooperation, the scope for growth could be tremendous.

The speakers noted that Moroccan consumers preferred locally made traditional, handmade jewellery for special occasions and for daily wear, women opted for contemporary jewellery — by and large influenced by European aesthetics considering Morocco’s proximity to the region, and its French colonial past.

Mansukh Kothari, Co- Convener, Events, GJEPC added, “For any trade to flourish, it is important that there is constant engagement between manufacturers and buyers. Considering the current scenario, a series of Buyer-Seller meets and interaction through virtual platforms should be explored. I welcome Moroccan traders to visit our flagship shows IIJS Premiere and IIJS Signature, where they can engage with manufacturers for fulfilling their sourcing needs.”

The meeting concluded with Morocco participants requesting for sharing of jewellery manufacturing skills, collaborating on areas such as transfer of technology.