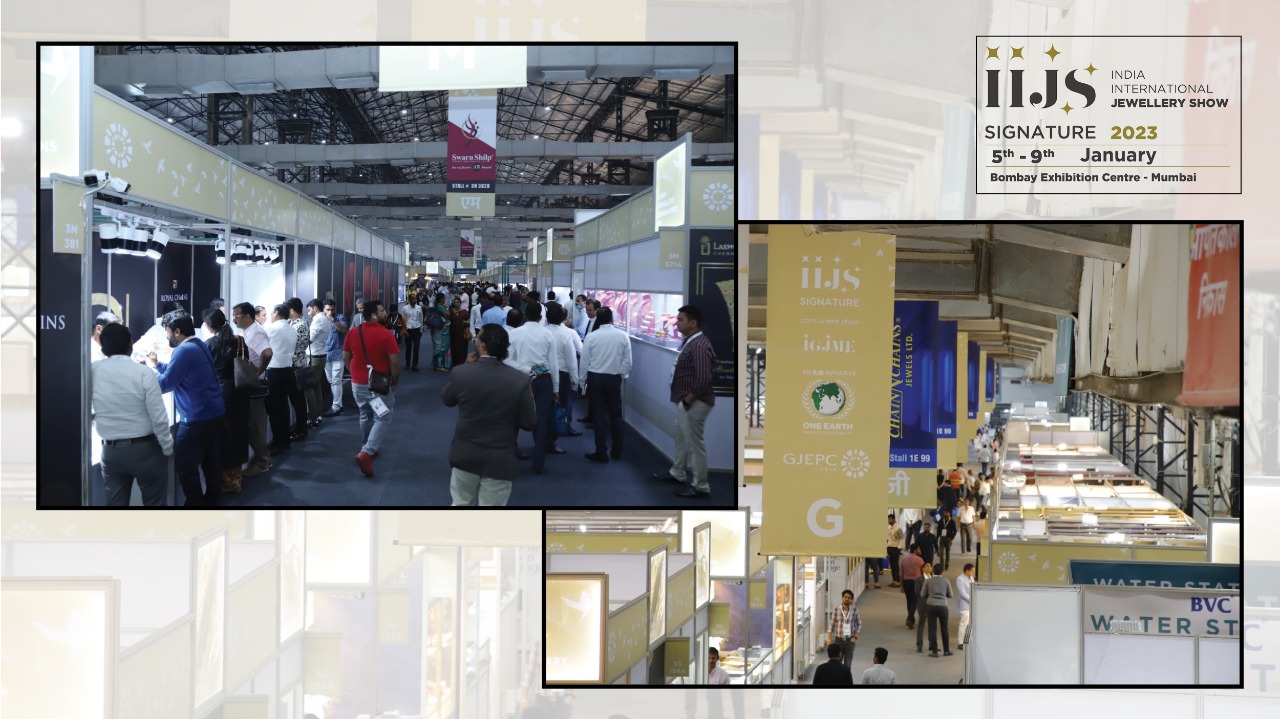 ·         There were more than 20000 Trade Visitors, of which 800 + were International Visitors from 60 countries, including the USA, Canada, UK, Hong Kong, Middle East, Europe, Bangladesh, Nepal, Russia, Thailand, and Egypt had visited the show.

The highlight of IIJS Signature 2023 was a masterpiece creation of a magnificent Lord Ganesha gold pendant weighing 1.3 kg and specially carved and embellished with 36,000 diamonds. GJEPC Chairman Vipul Shah and Tushar Agarwal, MD, Shiv Narayan Jewellers launched this spectacular piece that is all set to smash its way into the Guinness Record Book.

While some participants hailed IIJS Signature as the Best Platform for spearheading B2B growth in the gem & jewellery industry, others said that they were putting their best foot forward post the pandemic to enhance their growth trajectory. Still others pointed out that IIJS Signature bridges the gap between the manufacturer, wholesaler, retailer and other trade constituents. Many from remote parts of the country said that IIJS Signature gave them a voice and an opportunity to match as well as compete with others to catch the eye and attention of domestic and international buyers. Participants catered to different benchmarks such as trendsetters, quality, innovation, hand-made craftsmanship and mass manufacturing in jewellery.

Vipul Shah, Chairman, GJEPC, said, “The year’s first, Green Expo and biggest-ever IIJS Signature got an encouraging response from domestic gem & jewellery business entrepreneurs as well as international buyers despite several global headwinds. International buyers showed keenness to source gem & jewellery from India after the recent successful FTAs with the UAE and Australia.” He added, “Genuine serious buyers added to the momentum of business generation even as enthusiastic Indian jewellers presented their best-ever creations of the last two years. Indian trade was buoyed by strong double-digit growth posted in Plain Gold jewellery exports in December 2022 y-o-y and for April-December 2022 period. Overall, the sentiment is quite bullish.”

Kirit Bhansali, Vice Chairman, GJEPC, said, “The Government of India’s recent initiatives to boost exports of gem and jewellery exports and make the country a global hub are helping to attract more and more international buyers. India is in the limelight, thanks to initiatives such as the UAE CEPA and the Australia ECTA coupled with the China Plus One strategy. Boosting infrastructure such as Jewellery Parks, Mega CFCs and Training institutes, which promise job creation and skill development are making India more attractive to international buyers.”

Nirav Bhansali, Converner-National Exhibitions, GJEPC, said, “IIJS Signature 2023 witnessed the One Earth green initiative, which marks the first-ever large-scale pro-environment initiative by any trade organisation or EPC in India. IIJS Signature witnessed trail-blazing initiatives such as Innov8 Talks, Innov8 Launch Pad, Design Gallery for Women Entrepreneurs & Budding Designers among others. The new section for Lab-Grown Diamonds reflects the sign of the times to come. GJEPC’s One Earth initiative was a huge success with commitments for planting 50k trees. The initiative saw contribution from exhibitors, visitors, media, associations and agencies involved in organising the IIJS.

During the inauguration, Chief Guest Anupriya Patel, Hon’ble Minister of State for Commerce and Industry praised the efforts made by GJEPC to make the 5-day IIJS Signature show bigger, better and greener.

Poonam Mahajan, Hon. Member of Parliament, said the next 25 years after Amrit Mahotsav celebration will see India emerge as a Kohinoor – as the global leader and hub in gem & jewellery exports.

MP Ahammed, Chairman, Malabar Gold & Diamonds, said, “GJEPC has helped regional jewellers with a global platform to fulfil Prime Minister’s vision of taking Indian jewellers from every corner of the country to the global market. We believe in Make in India and Market to the world concept.”

GJEPC took the effort to make the show bigger, better and greener, with the aim to make the IIJS shows completely carbon-neutral by 2025-2026. Steps were taken in this direction. Firstly, all booths at IIJS Signature were pre-fabricated to avoid any wastage. Secondly, for the first time ever, IIJS Signature used Tata Power Renewable Energy Ltd., which supplies power harnessed by solar and wind energy.  Thirdly, and the most important initiative was One Earth! GJEPC is committed to contribute to Mother Earth while creating a conducive ecosystem for our gem & jewellery members. GJEPC introduced “One Earth” initiative to treasure Planet Earth in association with Sankalp Taru Foundation.

GJEPC’s IIJS Tritiya in Bangalore will be one of the best shows for the southern region. The show dates are 17th to 20th March 2023. With 1,500+ booths and 800+ exhibitors, GJEPC expects IIJS Tritiya to be almost as big as last year’s IIJS Signature 2022.

Giving his feedback Vishal Khunt, Production Lead, Diyora Jewellery said, “LGD section is a brand new, exciting category and the visibility should have the same energy. The organisers could consider putting up large LED screens and exciting audio-visuals that match the energy around the LGD segment.”

Siddhartha Sawansukha, MD, Sawansukha Jewellers said, “Signature has always been the same – less visitors but serious buyers. Diamond jewellery is being appreciated a lot, especially for us. One change I noticed that even those buyers, who deal in generic jewellery, have started demanding jewellery with some design elements. We saw that more weightage was given to design and buyers were more appreciative of designs that were different. We have always stood apart for our designs, and the fastest moving categories were bracelets and necklaces.”

Masiar Shaikh, Business Head, Gold Artism said, “IIJS Signature show 2023 has been excellent and has been yielding for us. We realised that quality over quantity is more important in terms of buyers. All types of lines received good response from lightweight to heavyweight jewellery, fancy jewellery to the evergreen traditional lines. Buyers had come with an open mind and we received orders from across all the regions of India, and 50% of them were first-time buyers for us. This show was all about serious buyers only there’s no second opinion about it. All are looking for better quality and design products.”

Abhishek Raniwala, MD, Raniwala 1881 said, “We specialise in polki diamond and jadau jewellery and have been associated with GJEPC’s IIJS shows for many years. This edition was very well organised and nicely spaced out for easy movement. We launched our collection Aangan and it was very well

received by the trade at large. All our interactions were positive, and the buyer came only with the intent of working together and booking orders. I think what is remarkable is that rather than meeting a lot of people and not getting into deals, meeting less clients and making the right type of connection is more important.”

Saud Salim Al Mazrouel, Director, SAIF Zone said, “It’s a very excellent show and over 2500 exhibitors are here. We have participated previously in this event, and we see this year is much better and much stronger in attendance and gathering. And I think there are a lot of opportunities to benefit from the show.”

Jayant Ranica, Pure Gold, UK, said, “This year, I think you have more than exceeded our expectations. The hospitality has always been amazing. But you and you know, in the years that I’ve been coming, I thought, Okay, this can’t be better than this. And you guys, stood up again this year. So I really appreciate that. And we’re very grateful. Especially, I can speak on behalf of the UK delegation. You know, it’s been absolutely seamless, amazing. You’ve gone completely digital, with your passes. Everything has been really on point, I would say.