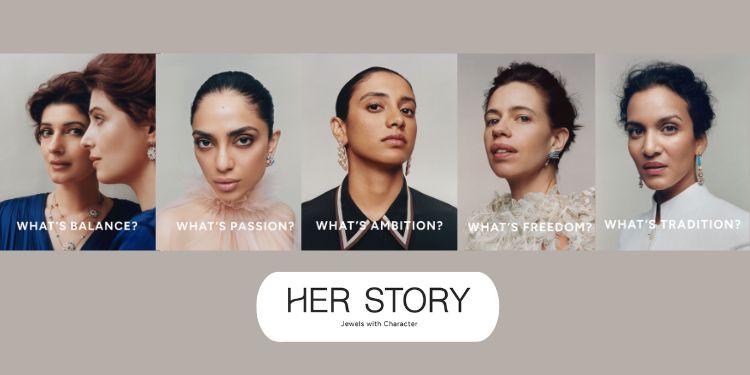 Each of the women answers a question, contextualised to her own life, that opens up a dialogue on aspects of modernity. The campaign brings alive their personalities, celebrating keywords and ideas that resonate with them, while they are photographed in a manner that best represents the ideas in their own lives, through black-and-white and colour portraits.

“For me, tradition becomes significant when it feels relevant and when it feels personal and truthful to who I am today. It is something that has a lineage; that is evolving with each person who passes it down,” says Grammy-nominated musician Anoushka Shankar, exemplifying the heart of the Keepsakes collection, which is inspired by a woman who holds a deep connection to her roots no matter where she may go. “With Her Story I was very attracted to what a strong woman-led company it is. It’s got a real personal touch from people who are really invested in what they’re making. The jewels are stunning and beautiful, and have a way of being inventive but not just for the sake of it. It has an authenticity to it that I really connect to.” Shot playing the sitar against the Parisian skyline, the British-Indian-American musician captures the essence of taking your roots to the world with grace and sophistication.

Cricketer Smriti Mandhana says, “My life is all about ambition and determination. It all started with an ambition to be a cricketer, and play for India. The cricket ground is where magic happens – especially the 22-yard wicket where I go and bat. That’s where I feel limitless. Her Story has an idea behind every jewel which I felt was really cool. I know there’s a story behind it and I’ll feel attached to it – it’ll motivate me to do better.” Smriti Mandhana is seen connecting to the Limitless collection, which is inspired by the unstoppable drive and ambition of a woman who dreams and dares audaciously.

The Kaleido collection, which celebrates the multifacetedness of a woman who strikes a balance between the many roles she plays, comes alive through the voice of writer, entrepreneur, producer and mother, Twinkle Khanna.  She says, “Balance is not about doing anything perfectly – it’s about just doing that task that you have at that moment to the best of your ability. Managing all the aspects of your life is just about practice. What I’ve liked about being part of this Her Story campaign is the design, and that there is so much thought behind the design. When I look at this stack of bangles, I feel that they reflect all the different roles that I inhabit in my life. And just putting them on makes me feel empowered to tackle all of them efficiently.”

Bringing alive the spirit of the Born to Fly collection, which celebrates the free-spiritedness of a woman who lives her life on her own terms, actor and writer Kalki Koechlin shares, “Freedom requires courage to do the things that you choose to do, and take responsibility for the actions that you choose to have. To me it means being able to do exactly what I want, without being questioned, with equal opportunities. I loved that my first meeting with Her Story had the word freedom in it, and also the idea of doing things which aren’t what society expects of you. Especially when it comes to a jewellery brand, we have a tendency to think of beauty in a very limited fashion and Her Story was ready to expand that idea of beauty, which was really inspiring. ”

And in her second Her Story campaign, actor Sobhita Dhulipala showcases a captivating energy in the Poetry in Motion collection – inspired by the passion and intensity of a woman who creates her own rhythm in life. She shares, “Passion can be quite porous – a flicker of a feeling that is so true and so quick but perhaps you’re changed by it forever. I don’t think one can experience the pleasure and the wonder of art until they become it. When I was a child, I had read a journalist describing a very great dancer – ‘to watch her on stage was like poetry in motion’. Those words really struck me. So the minute I read the name of this collection and the poem under it, I felt like my inner essence was honoured. I couldn’t quite believe that this brand is so invested in making someone – the consumer, the wearer, the admirer, the audience – feel seen. Feel beheld, in their jewellery. And I don’t think we’ve had jewellery inspired by the ghungroo which is actually so Indian, so ancient, so culturally relevant, so romanticised and beautiful.”

Lending insight behind the intention of the campaign, Sitanshi Talati-Parikh, Brand Creative Director, Her Story, who conceptualised the creative thought of the campaign, shares, “As a brand inspired by stories and perspectives of real women, we wanted a campaign that celebrates authenticity of voice; that captures the aspects of women that are aspirational and often challenged by constructs of society. Can a woman be free, ambitious and a multitasker? Can she do it all without being restricted by voices around her and the conditioning within her? Who better than these powerful women to share their stories and make us think about how, as we chase balance, perfection isn’t a worthy opponent; or how freedom flows amid the mantle of responsibility and equal opportunity. Ambition isn’t about losing something as you go forward, it is about gaining a chance to show the world what you are capable of. And in it all, we celebrate the beauty of choice of the modern woman.”

Falguni S Kapadia, Brand Marketing Director, Her Story, adds: “Along with being a brand inspired by the stories of modern Indian women, Her Story is also a team of predominantly women: from leaders in every department to designers and craftswomen – so we are deeply aware of the perceptions and expectations that exist in society. We’re driven to focus on authentic voices that can open up real conversations. This campaign is represented by five strong women who we believe stand for freedom, rootedness, passion, balance and ambition. It aims to trigger thoughts and opinions around choice and the idea of modernity. The intention is to ask modern Indian women a seemingly simple question, thus creating a moment of reflection for them and provoking them to find answers in their own personal stories.”

Photographer Bikramjit Bose says, “We have five women who are so different in who they are and what they do. Learning about their stories helped me figure out how to treat each of them as a subject. I definitely saw the association between the keywords and the women, and hopefully I’ve been able to do justice to them, in being able to capture not just them but also the essence of the word they’re personifying. I’ve enjoyed every Her Story campaign that I’ve worked on – they’re one of the few brands that puts the focus on the person being photographed, as opposed to it being all about the product. As a portrait photographer who is interested in the person first, that really helps me in creating these images because I know they care about the person as much as I do.”

The campaign will play across outdoor, digital and print media, as well as in-store, as the maison launches their flagship store. Her Story moves from its current concept boutique at Altamount Road to Kala Ghoda in Mumbai, December 2022.

Mia by Tanishq partners with Flipkart to boost online sales