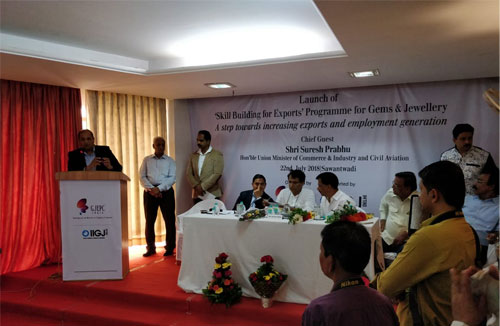 Hon’ble Union Minister of Commerce & Industry and Civil Aviation Suresh Prabhu on Monday inaugurated a skill building training program for gem & jewellery sector held at Sindhudurg, describing it as a “golden opportunity” for those involved with the industry in the region. The programme was organised by The Gem & Jewellery Export Promotion Council (GJEPC).

Elaborating on the advantages of the project, Shri Prabhu said, “The training programme is not just for the people already working in this sector but whoever is interested would be trained under this programme.”

Calling on the people of the region to utilise the opportunity that was being provided, Shri Prabhu added, “Currently the artisans and traders lack the training they require to play an important role in world gem & jewellery market. With this advanced training facility we could fill this gap.”

Speaking on the occasion, Pramod Agrawal, Chairman, GJEPC thanked the Hon’ble Minister for the support he had given the gem and jewellery sector, stating, “One of the initiatives recently taken under Sureshji’s ambitious leadership is signing of MoU with Maharashtra Government  for setting up India’s largest Jewellery Park in Mumbai. It is estimated that there would be a Rs 13,000 crore investment in this project and it will help generate an additional one lakh jobs in the sector.”

He further said that the GJEPC, in alignment with the Prime Minister’s vision of ‘Skill India’, had undertaken this initiative to nurture skill development across nation and provide enhanced learning through various centres of the Indian Institute of Gems & Jewellery (IIGJ), by spreading it to the interiors of Maharashtra.

Agrawal said, “Regions like Ratnagiri and Sindudurg are famous for making jewellery, especially tribal and imitation jewellery. By enhancing these skills through training and giving better manufacturing facilities, both the regions can contribute significantly for the exports of gems and jewellery.”

He pointed out the Ratnagiri and Sindhudurg lay in close proximity to Goa, so gem & jewellery development in the region could substantially contribute to export growth. GJEPC, which has already set up Common Facility Centres (CFC) at Amreli, Visnagar and Palanpur in Gujarat, has identified 13 industry clusters across the country for additional CFCs. “We are in the process of setting up a CFC in Sindhudurg for which we are doing capacity building programme amongst local traders,” Agrawal stated.

The Council has already identified the possibility of providing training in imitation and tribal jewellery making to around 5,000 women from Sindhudurg region, which would also be a enhancing their greater empowerment.

The skill building training program in Sindhudurg will be supported by IIGJ Delhi, one of the six institutes run by the Council. The others are in Mumbai, Jaipur, Surat, Varanasi and Udupi.

Bank finance to gems, jewellery sector down 10 per cent