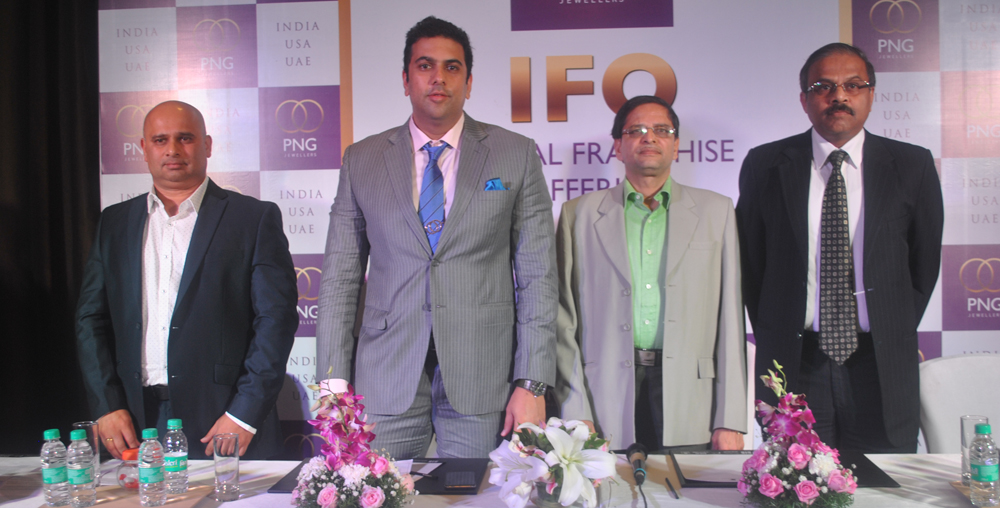 In a bid to take its legacy to even greater heights, PNG Jewellers announced its plans to initiate a franchise model for the first time at a recent press conference. Named ‘IFO-Initial Franchise offering’, the programme aims to intensively increase the penetration of the jewellery brand in both Tier I and Tier II cities in Maharashtra within the next two years.

This announcement marks a huge milestone for PNG Jewellers as it will conduct its biggest expansion yet in a relatively short span of time. From establishing itself a single store family owned and operated flagship store in Pune about 60 years ago to becoming a private limited company with outlets across Maharashtra, Goa, Madhya Pradesh, US and UAE, PNG Jewellers has come a long way. The introduction of a franchise model is the next exciting phase in the growth story of the brand and one that is expected to have a lasting positive impact on its business.

Over this period of two years, PNG Jewellers is scheduled to open about 15 new stores via the franchise model. Initially, the focus will mainly be on Maharashtra, especially areas around Pune such as Talegaon, Pirangut, Undri and Chakan; areas around Mumbai, such as Navi Mumbai, Mira Road-Bhayandar and Ghodbunder road Thane; Goregaon, Akola; Daund; Barshi; Gondia; Yavatmal; and Malegaon. There are plans for further expansions in the Konkan region of Maharashtra as well as international markets such as the Middle East, UK, USA and the Far East.

Those interested in entering into a franchise association with PNG Jewellers will be able to pick from two models — FOCO and FOFO — opening the scope to those who already have business experience as well as those looking to start a business venture.

This initiative will prove to be mutually beneficial to both parties. Small business owners will have the chance to associate themselves with the esteemed legacy of PNG Jewellers, which has been built on the cornerstones of goodwill, trust and credibility. This will give their business an added boost. PNG Jewellers will also provide decades’ worth of valuable expertise and marketing support, innovative designs that it is known for and merchandising ensuring the franchise is equipped with the best possible tools for success.

PNG Jewellers will in turn also benefit from the franchise model as it will facilitate a rate of expansion of the business which would be otherwise be difficult due to it being a heavily capital-intensive process. The franchisee’s on-ground network and knowledge of the local market will also help ensure the prosperity of these new stores.

All stores will have the same iconic modern look and feel of the heritage brand and one can be assured that they will uphold the high standards that PNG Jewellers stands for. As with existing PNG Jewellers stores, a variety of inventory across diamond, gold and silver jewellery will be available at these franchises.

“We are always working towards expanding PNG Jewellers’ footprint and making it a preferred destination for jewellery shopping, not just regionally and nationally but also globally. It gives me great pleasure to share our vision of expanding our business and we look forward to creating progressive entrepreneurs who will be serving many more happy customers through a successful franchise model,” expressed Saurabh Gadgil, Chairman and Managing Director, PNG Jewellers during the announcement.