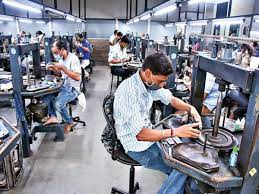 Surat’s diamond cutting and polishing industry that employs nearly 5 lakh workers associated with it, is experiencing a crisis, especially due to the ticking time-bomb of a looming global recession risk and also the Russia-Ukraine crisis that has resulted in sanctions against Russia.

A report in The Indian Express said that nearly 5,000 diamond workers have been furloughed since last year November.  “We have got information from 24 small and medium-sized factories that have not opened after Diwali in October 2022. The actual number of layoffs could be more. Many units are also scaling down working hours,” Ranmal Jiliriya, president of the Surat Ratnakalakar Sangh or diamond workers’ union was quoted as saying.

Almost 90 per cent of diamonds that are mined in the world are cut and polished in Surat for either setting up in jewellery or selling them loose on the international market.  So why are  workers being laid off? Surat’s diamond factories get a lion’s share of the gems from Alrosa, a Russian diamond mining and trading company and amid sanctions on Russia by the US, UK, Canada and other prominent western nations, the diamond supplies have reduced to a meagre 25-30 per cent.

Even though the diamond workers in Surat are somehow able to source rough diamonds but the sanctions have caused prices to soar and the supply chain has been disrupted. As such, the workers at the nearly 5,000 units of diamond cutting and polishing in the Gujarat city are living in constant apprehension of losing their jobs.  The workforce mostly comprises migrant workers from Saurashtra and North Gujarat.  Provisional data from the Gems and Jewellery Export Promotion Council has shown a sharp drop into imports of rough diamonds during April-November 2022. At 853.95 lakh carats, the import has fallen down to almost 24 per cent from 1,122.32 lakh carats for the same period in previous year.

In a recent development amid the ‘diamond crisis’ in Surat, the Gem & Jewellery Export Promotion Council (GJEPC) has urged the Centre to allow sale of rough diamonds in Special Notified Zone through Safe Harbour rules by diamond companies.

“At least 20% of the rough diamond traded in the world will be shifted to SNZ in India due to the level playing field given to the foreign mining companies,” GJEPC Vipul Shah said.