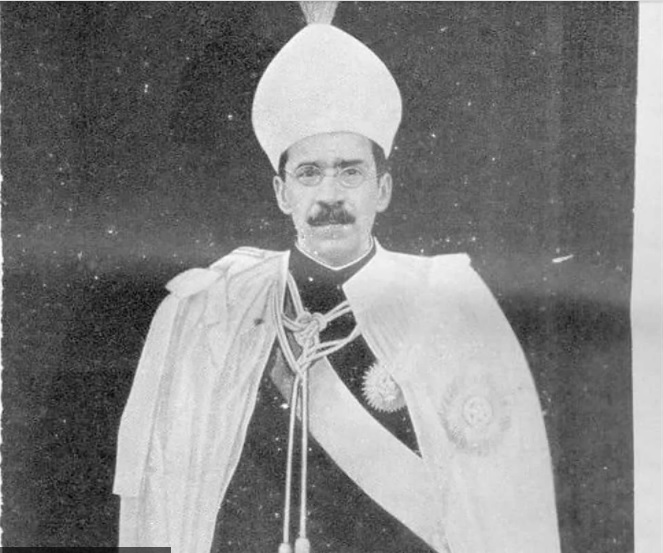 The Nizam of Hyderabad Deccan His Exalted Highness Mir Osman Ali Khan Siddiqui was the last Ruler of the Asaf Jahi Dynasty who ruled the largest princely state of Hyderabad & Berar by population and the second largest by size. Factual stories about HEH the last Nizam of Hyderabad’s riches are well documented worldwide. He reportedly used a £50m ostrich-egg sized diamond as a paperweight. HEH The Nizam VII was the second Indian to be featured on the cover-page of Time Magazine February 22nd 1937 edition as the Richest Man of the world. HEH The Nizam VII was a secular Ruler, a philanthropist & a genius architect of modern-day Hyderabad. During the period of war HEH The Nizam donated truckloads of gold coins to the National Defence Fund of India & as a philanthropist his generous donations of large sums of money to the Benares Hindu University & other Hindu institutions are irrefutable evidences of his secular rule.

The Nizam’s era are highly sought-after, command a high price and every antique collector’s delight. High value bidding at international auction houses to acquire Nizam’s era antiques are a common sight wherein collectors from around the world and new generation of super rich Hyderabadis vie to own a piece of Hyderabad’s heritage & bring it back to the City of Pearls – Hyderabad.

It’s worth mentioning here that during the last eight decades, a huge quantity of immensely valuable antiques of Nizam’s era were sold at throw away prices by some of the Nizam’s descendants, stolen or looted and smuggled out of the country and sold unlawfully by the caretakers of the Nizam’s Estates, taken away as war booty by the British Indian forces and few others received them as gifts bestowed by The Nizam’s Government & passed on to the future generations as family heirlooms.

Amarbir Singh – a Numismatic Expert & Authority on Nizam era Hyderabad currency and co-author of ‘Indian Paper Money’ says, “Nizam’s Hyderabad had its own railways, airways, central bank, currency, including paper notes, army, and a high court. After Operation Polo and subsequent trifurcation of Hyderabad State, it lost a bit of its sheen which is now regained by the efforts of the experts and enthusiasts of heritage and history. Technology has given the impetus to the curiosity and the collection interests of lot of people, many who do not even have their roots in the Hyderabad State. The coins, currency, medals, tokens, stamps, and militaria issued by the Nizam’s Government are very sought-after collectibles today. So, are the vintage books related to Hyderabad and the 1937 Time Magazine which are getting rarer by the day.”

Dr. Mohammed Safiullah – City’s well-known Historian says, “The entire world came to know about the existence of two large Gold Mohurs from Mughal era weighing 11.200 kgs and 2.240 kgs from the Nizam’s treasures after they were put up for sale in an auction three decades ago in 1986. But due to the intervention of the Indian Government, it was withdrawn by the Fine Arts Auctioneers – Habsburg Feldman of Geneva, Switzerland and later sold privately.”

A lesser price antique “A large Guilded Firman in the name of the Nizam of Hyderabad Sikandar Jah was sold for £1500 at Christie’s in 2016. A large and highly detailed design of the Osmania General Hospital based on the Islamic Architecture of South India by Esch was sold for over £6875 in 2011 at Christie’s also. Vincent Jerome Esch, (1876-1950) was engaged by the Nizam of Hyderabad HEH Mir Osman Ali Khanin 1914 as an Architect to assist in the redevelopment of Hyderabad city following its devastation by floods and plague in 1908 and 1911.

Ahmed Rahmatullah Khan, a Hyderabadi Techy who works for HP is one among new generation of collectors who recently acquired a rare historic military medal in an Australian auction spending over 180 AUD. The medal has an interesting story behind it as it was issued by HEH The Nizam of Hyderabad for the safe deliverance of Lord and Lady Hardinge’s (Viceroy of India and his wife) after they escaped a bomb attack by the Indian revolutionaries in 1912 while travelling on an elephant in Delhi. The medal was expected to sell for 60-90 AUS but due to the historical story and the Nizam’s tag attached to it, it was sold much over the expected price for 140 AUS plus the auction house fees and logistics.

Muzammil Rizwan Khan based in Australia is a newer generation of Hyderabadis and a proud owner of the Nizam of Hyderabad’s 650 Flintlock Cavalry-Pistol made in the year 1825 and was in the personal possession of the Nizams until 1974. Rizwan purchased the antique gun after spending few thousand pounds last year in a UK auction and imported it to Australia. Whilst the Hindutva Rightwingers are inciting hate with their rhetoric to forcibly revert Indian Muslims to Hinduism (GharWapsi), Indian origin Hyderabadi Muslims like Rizwan exerting efforts employing their resources, time & money to bring back the lost heritage &antiques of Hyderabad&India. As he proudly stated in the unboxing video on his Facebook page “Mein ne Hyderabad ki cheez Hyderabad Alhamdulillah Ghar Wapis le aaya hoon. This pistol is just not owned by me but it belongs to all Hyderabadis and I have bought it back home and in the hands of a Hyderabadi again.”

In another recent auction on 17th of December 2021, a small white metal silver plate place holder depicting a young Edward VIII (Prince of Wales) on his Royal tour of India and HEH the Nizam measuring approximately 8 inches was sold by East Bristol Auctions in UK for £110. The antique piece had some minor damages, one of the figurines of the tiger on the Coat of Arms of HEH The Nizam had a tail missing & the coloured photo of HEH the Nizam was considerably faded.

The picture of HEH Nizam VII is hand coloured & depicts the Star of India Robes awarded in July 1914 decorated with orders and garters – a hierarchy of awards and medals granted to the Rulers, Princes, Nobels & Chiefs of the princely states of India. HH Nizam VI and HEH Nizam VII both were awarded the Star of India Robes by the then British Monarch, Dr. Mohammed Safiullah added. On 29th October 2020 a commemorative silver scroll holder dedicated to the Nizam of Hyderabad dated 1903 from the Anjuman-i-Islam of Bombay was sold much over the expected price for £1,125 plus fees and vat.

Collectors crave to acquire Nizam era Hyderabad related antiques is ever growing and has reached to an extent in the last 80 years. Since India’s independence millions worth of Nizam’s antiques were traded at the international private & public auctions as well as local auctions, but there isn’t any data to give an exact figure or value of the trade.