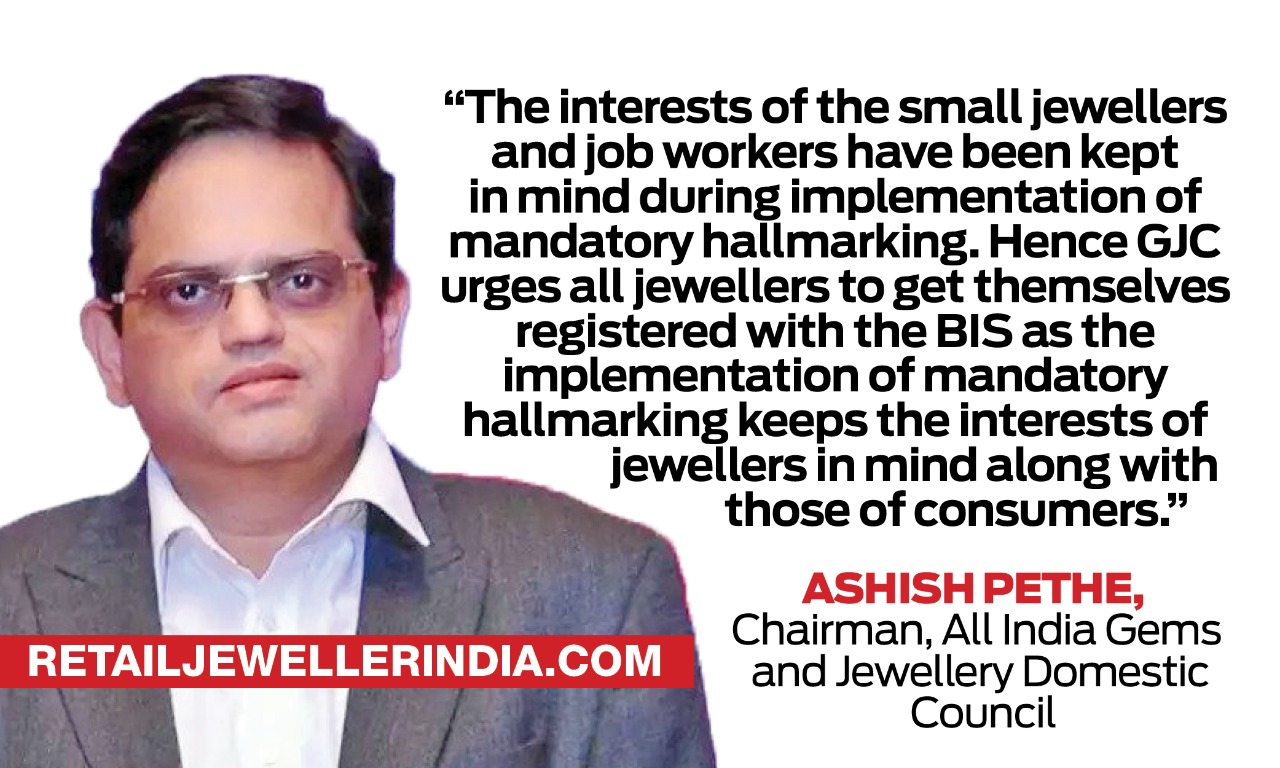 National, 17th June 2021: All India Gem & Jewellery Domestic Council (GJC), the national apex body of the domestic gems and jewellery industry, has thanked Hon. Union Minister for Consumer Affairs Piyush Goyal ji & Hon. Minister of State for Consumer Affairs, Food and Public Distribution Raosaheb Danve for resolving issues in implementation of mandatory hallmarking regime in a marathon meeting of the Hallmarking Expert Committee held in the Capital on 15th June 2021. Over the last few months, GJC had represented many important issues on mandatory Hallmarking, such as HUID, restrictions in karatages, registrations etc and Honourable Minister has acknowledged and resolved almost all the issues of the Industry. Mandatory Hallmarking will be implemented in stages. In Phase 1 starting from 16th June 2021, mandatory hallmarking will be implemented in only 256 districts where there is atleast 1 hallmarking centre, out of 741 districts in India.  GJC has urged all jewellers to get themselves registered with the Bureau of Indian Standards (BIS).

Amongst several points represented by GJC over the past several years and accepted by the ministry are relaxation of key concerns such as ; one time registration without any fees or renewals, no penalties or search & seizures, no penal actions against Jewellers,  exemption of Jewelkery export or re-import, addition of karatages 20, 23 and 24k, and exemption of kundan, jadau, polki jewellery from mandatory Hallmarking. All these decisions are hailed by the entire Industry.

In a significant decision the minister has assured that No penal action will be taken against any jeweller while the industry is adjusting to the new regime till 31st August 2021.

The minister also gave relief on Hallmarking UID or HUID(where every article of jewellery is supposed to have a unique ID). HUID will not be applicable to the jewellers and will be restricted only to Hallmarking centres. Jewellers can continue to buy back old gold jewellery without hallmarking from consumer. Old jewellery can be hallmarked as it is, if feasible, by the jeweller or after melting and making new jewellery. Export and re-import of jewellery as per trade policy of Government of India , Jewellery for international exhibitions, Jewellery for government approved B2B domestic exhibitions will be exempted from mandatory Hallmarking.

Ashish Pethe, Chairman, GJC, said, “GJC, on behalf of lakhs of jewellers and allied businesses had been representing the concerns of mandatory hallmarking to Ministry and BIS and we express our heartfelt gratitude to Union Minister for Consumer Affairs Piyush Goyal and Minister of State Raosaheb Danve for resolving most of the issues raised by GJC and the Hallmarking Expert Committee during the meeting held in the Capital on 15th June 2021. The interests of the small jewellers and job workers have been kept in mind during implementation of mandatory hallmarking. No penalties, search & seizure and any form of penal action will be taken against jewellers till 31st August 2021. Exemption for jewellers with turnover less than Rs. 40 lacs  and free one time registration for all makes it convenient to small jewellers. Hence GJC urges all jewellers to get themselves registered with the BIS as the implementation of Mandatory Hallmarking keeps the interests of jewellers in mind along with those of consumers. A committee constituting representatives of all stake holders, revenue officials and legal experts will be formed to look into the issues and shortcomings of the present law and resolve them.”

Saiyam Mehra, Vice Chairman, GJC, added, “The Government of India has accepted most of the key suggestions based on the comprehensive representation made by GJC. Clarity on mortgage jewellery is awaited and will be discussed in the ‘proposed committee’ meeting. The current form of hallmarking to be implemented truly gives consumer the choice and gives jewellers the right to practice their trade fairly without imposing any restrictions or uncertainties. It also safeguards the interests of the small jewellers as well as job workers, artisans and craftsmen.”

According to the Government, mandatory hallmarking will enable consumers/jewellery buyers to make a right choice and save them from any unnecessary confusion while buying gold. As per the recent data taken from BIS website, there are 940 Assaying & Hallmarking Centres (AHCs) and 84 AHCs have been setup under Govt. subsidy schemes in various districts.

De Beers unit discovers 1,098 carat gigantic diamond in Botswana, could be third-biggest ever

Gems, jewellery exports fall by 5% due to Covid disruptions: GJEPC