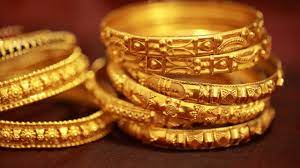 Ahmedabad: With the third wave of Covid-19 dampening wedding occasions, inflationary pressures eating into disposable incomes and an overall muted sentiment due to high prices of gold, the demand for gold jewellery went down by 26% in Gujarat in the fourth quarter of FY 2022. According to the latest report on Gold Demand Trends by World Gold Council (WGC), gold jewellery sales declined 26% during the quarter across the country as well.

Total volume of gold sales went down 31% in the Q4 of FY 2022 against the corresponding quarter of FY 2021. According to data compiled by Ahmedabad Air Cargo Complex, gold imports from January to March this year stood at 8.3MT as compared to 12.26MT in the corresponding period of 2021.

According to the WGC report, yellow metal demand declined due to relatively high gold prices which proved to be a limiting factor, particularly as consumers face increasing pressure on disposable incomes from soaring general price levels.

“Jewellery demand slumped 34% globally whereas bars and coins marginally went up. Weddings were muted due to the third wave of Covid-19 followed by a long-haul of inauspicious period. Moreover, in March gold prices shot up significantly due to the Russia-Ukraine war situation, as a result of which demand for gold dampened,” said Somasundara PR, managing director for India, WGC.

Interestingly, during this period, recycling of gold went up dramatically. Pan India, some 310MT gold was recycled during the quarter – up 15% as compared to the corresponding quarter. The same in Gujarat stood around 35MT according to industry estimates.

“With prices of gold going up, the returns were surely higher. Moreover, a number of people who were resuming small businesses were struggling to meet cash flow needs amidst a surge in inflation. As a consequence, gold recycling continued,” Somasundaram further added. On Saturday, however, gold prices remained in the stable range of Rs 53,500 per 10 gram over a week.