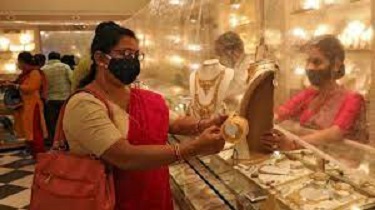 Twenty-carat gold contains 83.3 per cent gold and is quite popular among middle and lower-middle-class customers because of its cost-effectiveness.

The central government’s decision to ban hallmarking of 20-carat jewellery from June 2021 has jolted the bullion markets of Meerut, Delhi and other parts of north India, where 20-carat jewellery is much in demand and also generates considerable revenue for the government.

Furthermore, customers will be deprived of the ‘credible’ 20-carat gold jewellery that is, as of now, being hallmarked by the Bureau of Indian Standard (BIS).

Twenty-carat gold contains 83.3 per cent gold and is quite popular among middle and lower-middle-class customers because of it being cost-effective and suitable for better design in comparison to the jewellery made of out of 22 and 24-carat gold.

Ravi Agarwal, member of All India Gem and Jewellery Domestic Council and former president of Meerut Bullion Association, said manufacturing of 20-carat jewellery is very popular in north India and has been for over five decades.

The Meerut bullion market is over 200 years old and 75 per cent of jewellery manufactured here is of 20-carat gold that is supplied to bullion markets of Punjab, Haryana, Uttar Pradesh, Himachal Pradesh, Delhi, Bihar, Chhattisgarh and Assam.

UP Sarrafa Association secretary Sarvesh Kr Sarraf claims that the Meerut bullion market consumed 20 to 25 kilograms of gold daily for manufacturing jewellery and 75 per cent of 20-carat jewellery manufactured here caters to the need of the domestic market.

He said 20-carat gold jewellery was very popular among customers who wish to have jewellery at an affordable price. “Customers don’t need to pay labour charges for 20-carat jewellery so it becomes cost-effective. It’s popular among middle and lower-middle-class customers,” Sarvesh said.

The BIS had established eight labs in Meerut over 17 years from 2003 for testing and hallmarking of gold jewellery of 14, 18, 22 and 24 carats to certify the authenticity of gold used in it.

Agarwal said with much effort, the BIS labs had also started hallmarking of 20-carat jewellery four years ago but under the pressure of bullion traders’ lobby of south India, Gujarat and Maharashtra they stopped its hallmarking two years ago, even before the government order to ban 20-carat hallmarking. He said south India, Gujarat and Maharashtra export jewellery because they have the facility of ports and other infrastructure and 22-carat jewellery is acceptable as per the international standards.

As of now, Meerut jewellers have old stock of hallmarked 20-carat jewellery which they are selling to customers. Sources said many jewellers are also selling jewellery without any hallmark.

Agarwal and Sarvesh said officials of the Bullion Markets’ Association were conducting online meetings with concerned government officials to find an amicable solution. “We suggested to either scrap 20-carat jewellery everywhere or order hallmarking for all carats,” they said.

Agarwal said the government’s decision would have an adverse impact on the jewellery business in north India where customers from the middle and the lower-middle-class prefer 20-carat jewellery.

Neeta Dublish, executive member of Ladies Club, which has over 400 members in the Meerut district, said 20-carat jewellery is affordable. Dublish and several other women also demanded that the credibility of 20-carat jewellery needed to remain intact through hallmarking.

Bullion traders want the government to find a solution so that the domestic demand is taken care of.

Men of Platinum’s latest collection – a tribute to the Men of Character who choose to rebuild a new tomorrow!