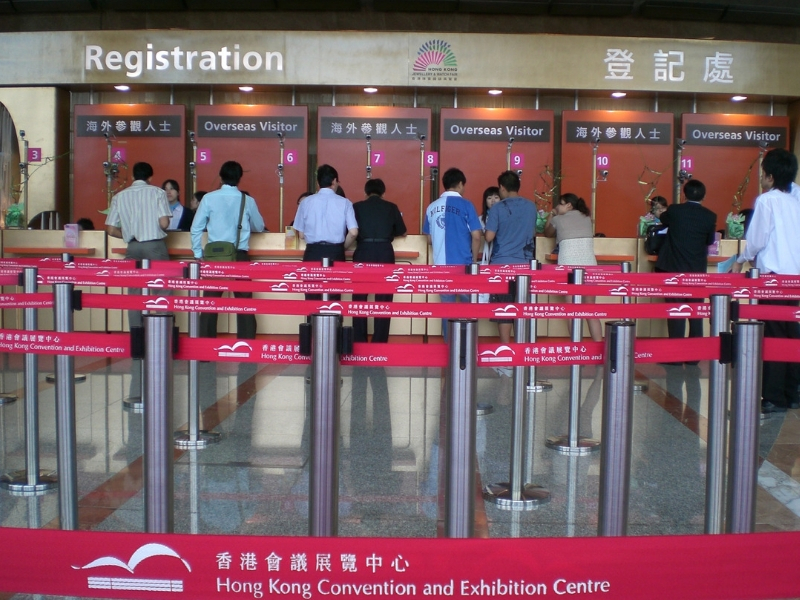 Two major jewellery shows organised by the Hong Kong Trade Development Council (HKTDC) will open next week. The sixth HKTDC Hong Kong International Diamond, Gem & Pearl Show, which showcases jewellery raw materials, will take place at Asia World-Expo from 26 Feb to 2 March, while the 36th HKTDC Hong Kong International Jewellery Show, which specialises in finished fine jewellery, will be held at the Hong Kong Convention and Exhibition Centre (HKCEC) in Wan Chai from 28 Feb to 4 March. This year, the two shows will feature a record of more than 4,600 exhibitors from 48 countries and regions, once again forming the world’s largest jewellery marketplace.

The two shows continue to receive support from industry organisations and jewellery associations from around the world. A total of 38 pavilions, including those from Australia, Mainland China, France, Germany, Italy, Myanmar, India and the US, will set up group pavilions at the shows. Various jewellery organisations will continue to set up their own pavilions, including ACODES from Colombia, the Antwerp World Diamond Centre, International Coloured Gems Association, Israel Diamond Institute, New York Diamond Dealers Club, Tanzanite Foundation and the Gem & Jewellery Trade Association of Thailand, among others.

The Avenue of Jewellery Creators will be set up at the Jewellery Show by the Asia Pacific Creator Association for the first time, introducing jewellery designs created by Hong Kong and mainland designers. Also new at the Jewellery Show are pavilions from Mexico and Indonesia, while groups from Donghai in Jiangsu province and Dongguan in Guangdong province will debut as exhibitors. The Diamond, Gem & Pearl Show will welcome the participation of the Australian Opal Association and the Beihai Bureau of Commerce from the mainland for the first time, broadening the show’s international outlook.

With support from the Japan External Trade Organisation and the Consulate-General of Japan in Hong Kong, the HKTDC is collaborating with the Japan Pearl Exporters’ Association and the Japan Pearl Promotion Society to invite Japan as this year’s partner country for the first time. A Japan Pearl Jewellery Pavilion and a Japan Pearl Pavilion will be set up at the Jewellery Show and the Diamond, Gem & Pearl Show respectively, featuring some 130 exhibitors. The two major Japanese pearl organisations will also host a media event on the first day of the Jewellery Show (28 Feb) to introduce exquisite pearl jewellery from Japan.

This is the sixth straight year that the HKTDC has run the two shows in parallel in separate venues. The Diamond, Gem & Pearl Show, which specialises in the raw materials used in the jewellery industry, will be held at Asia World-Expo. The show is organised into different themed zones, including the Hall of Fine Diamonds, which showcases prime quality diamonds of different shapes, cuts, grades and rare colours. The Treasures of Nature zone displays various glittering precious gemstones, semi-precious gems and other natural raw materials, while the Treasures of Ocean zone houses the highest quality pearls from Tahiti, the South Seas and other pearl-producing areas around the world.

Among the impressively large number of special exhibits on display are:

The Hall of Extraordinary will display skillfully crafted, valuable and unique jewellery pieces from some 100 companies, including:

The IT Solutions for Jewellery zone that debuted last year will return to help buyers boost their competitiveness by tapping into the latest technologies for use in the designing, manufacturing, quality monitoring and selling of jewellery.

A host of activities and events, including jewellery parades, networking sessions, buyer/exhibitor forums and seminars, will be held during the shows to facilitate business exchange. One key event is the cocktail reception and Jewellery Gala Dinner held on the first day of the Jewellery Show (28 Feb). The theme for the gala dinner will be “Dionysus”, after the Greek god of wine, with a menu personally prepared by Edward Voon, Executive Chef of French restaurant LE PAN. The dinner will be attended by actresses Carat Cheung and Toby Chan. The award presentation ceremony for the biennial International Jewellery Design Excellence Award – often referred to as the “Oscars of the jewellery industry” – will be held during the cocktail reception, with the “Champion of the Champions” being announced.

In addition, to identify design talents for the industry and demonstrate the high calibre of Hong Kong jewellery designers to international buyers, the HKTDC has joined hands with four local jewellery industry bodies to organise the 20th Hong Kong Jewellery Design Competition. The theme of the competition this year is “Be Connected, Be United”, attracting around 200 quality entries. The finalists’ designs will be on display in the Hall 1D lobby of the HKCEC during the show period.