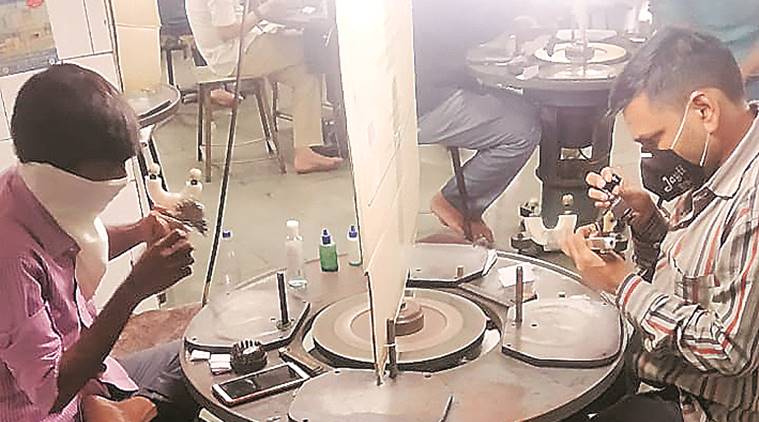 According to industry estimates, over 1,700 workers in the diamond business have tested positive, with the hubs of Katargam and Varachha turning hotspots.

FROM PUTTING up makeshift cardboard partitions at emery wheels where diamonds are polished to using UV light as disinfectant for paper sachets that pass through multiple hands, the diamond hub of Surat is finding new solutions in a desperate bid to revive business in a labour-intensive industry amid stringent Covid curbs.

According to industry estimates, over 1,700 workers in the diamond business have tested positive, with the hubs of Katargam and Varachha turning hotspots.

The outbreak has prompted the Surat Municipal Corporation (SMC) to register cases and penalise around 100 factories for not maintaining social distancing norms. Among the curbs, the SMC has directed companies to deploy only 50 per cent of their workforce at a time.

But owners say this has led to multiple choke points in factories — at the emery wheel, for example, says Bhupat Virani, who owns the B Virani Diamond Estate in Varachha.

The SMC has allowed only one worker at each wheel, with masks and sanitisers. “Working on the wheels is an intricate job and each usually has four diamond polishers. One of them works on the table (the top) of the diamond, the second on the crown, the third on the girdle and the fourth on the pavilion (the bottom),” says Virani.

All of these are parts that need to be polished to add value, he says.

“We were ready to abide by the SOPs but maintaining social distancing was a problem. It becomes hard for a single polisher to work alone… it takes more time and labour cost, and production goes down. So keeping in mind the risk factor for workers, who are like our family members, we have fixed cardboard from cartons as partitions on each wheel to enable at least two polishers to work,” he says.

Today, Virani’s factory has over 150 emery wheels engaging 600 workers in two batches of 300 each on alternate days, who cut rough diamonds bought from the bigger players into smaller stones of lower carat value, and polish them.

“We are surviving somehow in this tough situation,” says Virani, adding that his unit employed 1,000 polishers before the virus struck.

Data collated from Gujarat’s Covid bulletin showed 11,672 cases and 359 deaths in Surat till Sunday. However, The Indian Express had reported on July 21 about an unexplained mismatch between the death toll provided by the district and the state. Till July 24, the gap was 186 with the district reporting 521 deaths and the state’s official dashboard logging only 335.

In Varachha, meanwhile, diamond factories in Hirabaug and Sneh Mudra Estate have also started using cardboard partitions to optimise the number of polishers at the wheels.

Similarly, paper sachets containing polished stones that pass through several hands before reaching the market have come under the scanner for making handlers vulnerable to infection. The way out: ultraviolet light as disinfectant, although there are safety concerns over direct skin exposure.

Ravi Ghelani, a trader in Varachha, is among those who has started using UV lights to disinfect the sachets. “Since the sachets are made of paper, the regular use of sanitiser can damage them. Many traders have purchased the UV lights,” says Ghelani.

These makeshift measures, however, have only barely managed to keep business afloat. “The industry is facing a tough time due to the curbs and hardly any demand in the international market,” says Babubhai Katheriya, who heads Surat’s diamond association.

“We have spent all our savings. Now, with work only on alternate days, our salary has gone down. I was earning around Rs 25,000 every month, now it’s Rs 12,000. We cannot force our owners either, as they have saved our jobs. How can we run our homes with such limited income?” asks Hitesh Patel, a polisher who has been working in Virani’s factory for 15 years.

Lalji Patel, the owner of Dharmanandan diamonds, which is among the leading players in Surat with branches in the US, UAE and China, says his factory was sealed for 14 days and the premises disinfected after 18 workers tested positive.

“We reopened 10 days ago. Since then, not a single case has been reported. We are following the SOPs and even started collecting a penalty of Rs 100 each from polishers who are found without masks,” says Patel, who employs about 6,000 polishers in batches of 3,000 each on alternate days.