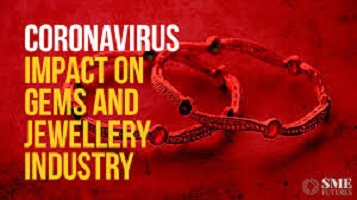 In the dynamic world of fashion and jewellery, where every trend surpasses each other, the ongoing situation of COVID19 has hit the market badly. With the sinking economical conditions, sacking of employees and stagnant market, things might not look very pleasing. But, as they say, where there is hope, everything happens. The diamond jewellery industry is also relying on the same. Many brands in India have anticipated 2020 to be a doorway to a plethora of business opportunities.

However, if experts are to be believed the national lockdown has dipped the market significantly as six to 10 carat diamond pieces and high-end chunky jewelleries, which are widely popular in the local market, suffered a major downfall.

According to statistics, in early June, there had been a drop of 15% diamond exports as compared to last financial year 2018-19 and many more figures are surely giving the Indian diamond industry the real tremors from COVID19. This shift in tremor has a history that Asian market has been experiencing for a while. If reports are to be believed, the rough diamond prices from the miners were predominantly high while polished diamond prices in the market were nominal, leading to a noticeable gap that the Indian diamond businessmen were suffering from, that further lead to huge losses in the Asian market. The existing trade war between China and the US has further triggered the downfall of the diamond business in the Indian market.

In recent times, with fall of over 50% in exports & 70% in domestic business, losses are imminent and many traders and factories are facing liquidity issues and are on the verge of shutdown. According to a statistics, with bills overdue for over 4 months at retailers end, the payment cycle has gone upside down in the lockdown phase and financial crunch seems to create an even bigger hurdle.

Sales and future. Though fresh sales are seen at domestic retail counters but as compared to pre-covid months the sales are down by more than 70%. It is being believed that the dip in sales is also because of no marriage season in sight and weak demand from consumer end. In this vicious circle, the supply  and  credit chain is badly affected.

On a brighter note, many factories have resumed operation in June but shortage of labour has crippled the operations and crisis seems to get bigger day by day. According to industry insiders, many labourers and workers have moved back to their hometown and there are no signs of coming back. It is being believed that job insecurity and threat of being put under isolation has left them with no choice to stay back at home. However, there are brands that are ready to provide them all sorts of security, but keeping the rising cases in capital cities it looks difficult to many. As of now, under unlock 1.0, most of the units are working partially or even reeling to get production started. In the last two week, many factories have re-shut their operations due to staff testing positive for corona.

Keeping the declining wedding market and low-profile wedding scenario post-lockdown, it is expected that people will invest in light weight jewellery and keeping that in view, it is expected that in post corona phase, there shall be a bigger shift in consumer behavior and buying patterns. It is being forecasted that people would prefer and shift to light weight and ultra light weight jewellery pieces over heavy ones. Also, at the production level, it is easier to make lighter pieces with least intricacies as compared to heavier ones. In the first phase of unlock 1.0 we can see the shift to taste to light weight and ultra light weight jewellery, and to fulfill that demand, brands are creating a wide range of such pieces that can sell like hot cakes. Also, it is expected that heavy jewellery or high ticket items will take time to get back on the platter. If industry and trend experts are to be believed, after the upcoming wedding and festive season, the market will reshape itself and this one will be all about survival of businesses. It is expected that the market will start normalizing only after September-October for better. In terms of massive sales, it is expected that impressive sales will start coming by the end of fourth quarter of the financial year 2020-21. The businesses are eagerly waiting for the curve to flatten and in this crucial time, they are utilizing the time to lay out a corona virus action plan that can be executed in the near future.  At this stage, when market is trying to move towards more stability it is necessary that players plays sensible and stay stronger together and support each other selflessly.