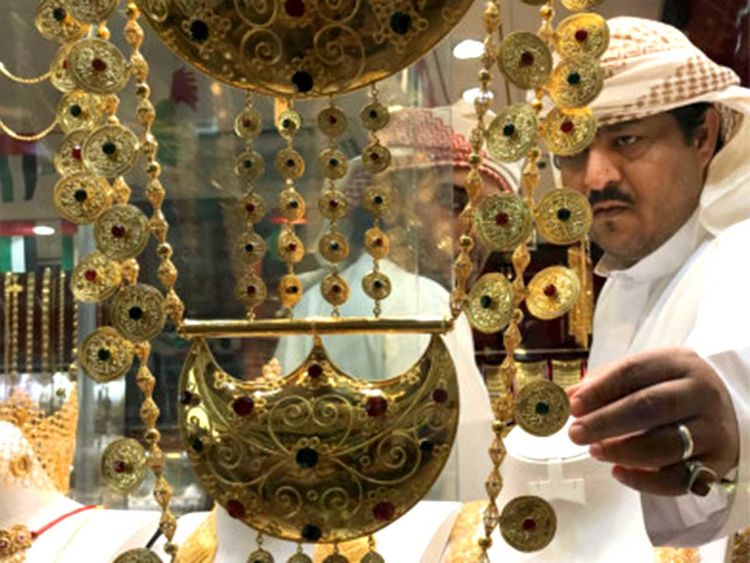 For the second time in two months, residents in the UAE are heading back to gold and jewellery stores – to sell rather than buy. This comes after the official Dubai gold rate went past Dh200 a gram for the first time since 2012.

Early on Thursday, the price for 22K was at Dh201.25 a gram. On May 18, it had touched Dh200 a gram before dropping, but not before seeing a sharp increase in selling activity by consumers rather than retailers. (The peak for Dubai gold price was on September 6, 2011 when it touched Dh215 a gram. Not many expect gold to push to those levels, at least for now.)

“It seems the Dh200 a gram level is the trigger for UAE residents to start selling some of their gold,” said Cyriac Varghese, General Manager at Sky Jewellery. “Last month, some of the selling had to do with Indian expats wanting to raise cash for the repatriation flights to India, which had just launched. There was a bit of desperation too because many who wanted to board the flights were short of funds.

“This time too, the selling is happening because many expats are trying to stock up their ready funds – and selling gold when prices are this high seems the best way to do it. Today, gold’s proving to be the only asset they can sell and get a premium on what they bought for.”

On selling their jewellery, UAE consumers would get the prevailing price on the actual gold component, but will have to forego the making charges. “But there are retailers who are willing to take the jewellery pieces and compensate some of the making charges as well,” said a Deira Gold Souq trader.

“If gold prices go beyond current levels, these retailers can still hope to make a profit from that.” (Consumers selling gold will also not be eligible to get the 5 per cent VAT component.)

But much of the selling by residents in the last 24 hours have been of gold bars, which are exempt from VAT.

Only a few buyers

Dubai’s gold and jewellery retailers are definitely not seeing many buyers. Since shops started the re-opening process from late April, average traffic to the stores are at 20-25 per cent from what they were in January and early February.

“The consumer is no mood to buy – eight-year price high is discouraging everyone,” said Varghese. “But retailers keep looking at the bright side – each time, prices rocket up, it emphasizes gold’s acceptability as a highly dependable asset for tough times.”

In the global metals market, bullion prices had been pushing towards $1,780 an ounce. Currently, it’s at the $1,761 mark.

All eyes on the flights

For jewellery retailers, a lot now depends on how soon tourists will return to Dubai, especially those who buy gold from here on any such visit. “The Deira Gold Souq demand is entirely dependent on tourist shoppers,” said Deepak Soni, CEO of Marhaba Jewellers. “It’s the one location that has suffered the most since the pandemic.

“But even if visitors return from July, current gold levels will be a deterrent. A return to buying will need gold prices to slide and for a feel-good factor to return. We are still some way off from there.”

Gold retains its glitter as price zooms amid coronavirus gloom

The future of jewellery industry is promising, here’s why