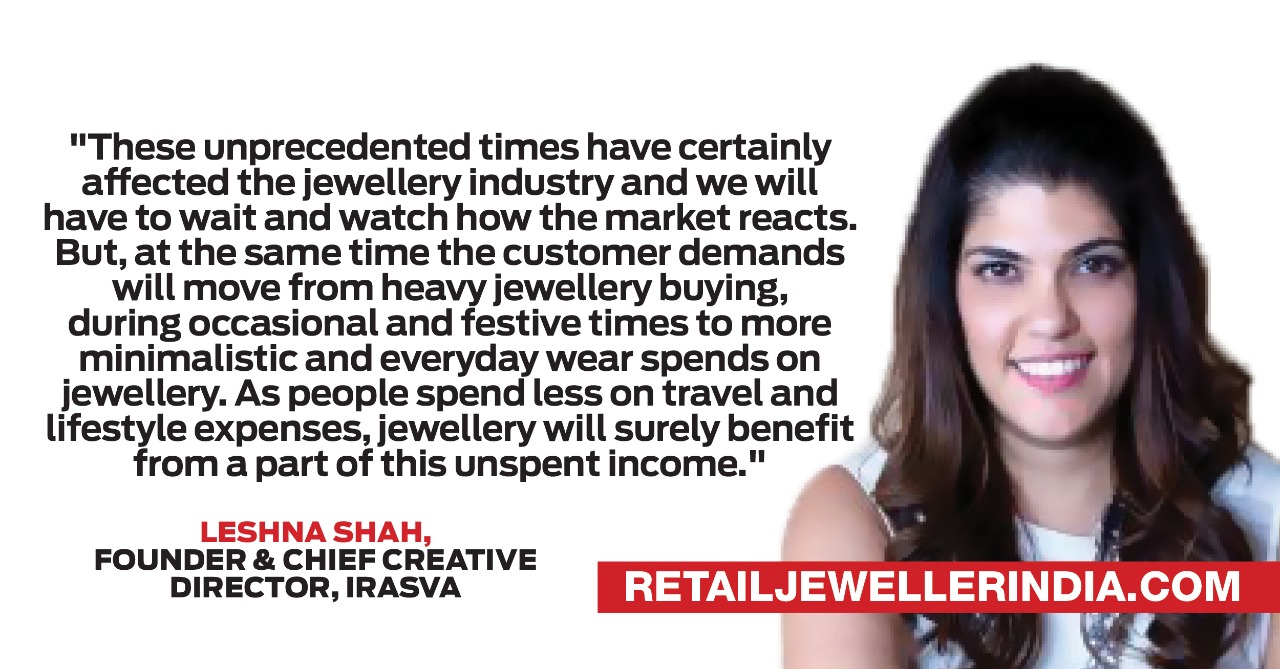 Covid-19 has changed the way we look at things. Not only has the global pandemic affected our lives in unimaginable ways, but also impacted our habits – from work to shopping, every avenue possible has taken a blow. While the world is weathering an economic crisis, with nations building respective strategies to sail through, the jewellery industry has also slowed down. But, if there has been an industry that has remained fluidic for many decades, it has been the gem and jewellery industry. Famines, floods and other natural disasters haven’t really been able to affect it greatly, as the demand for jewellery has always existed and the artisans and jewellers have always pushed themselves harder to meet the demand. So, what lies ahead for the industry that has survived all odds and proved to be the phoenix rising from the ashes? We got in touch with the industry biggies to know what the future holds for the jewellery industry and here’s what they had to say.

According to Anand Shah of Anand Shah Jewels, the future of jewellery in India definitely looks promising as it has come a long way. “From considering gold as a mere investment to holding dignity in owning precious jewels, our country has evolved to a great extent. With changing times, we have witnessed different trends in the jewellery industry, only to desire for more. Be it the special occasions like weddings or auspicious days like ‘Akshay Tritiya’ etc, jewellery makes it a complete affair,” says Shah, who feels the trend will continue for eternity.

Like any other industry, business of the jewellery industry has also got affected by the unexpected pandemic but industry insiders feel this is a temporary phase which will end soon.

“The gems and jewellery industry has been impacted due to the pandemic, but we are seeing some green shoots of recovery post the lockdown. While there is still uncertainty, we believe there will be both emotional and rational intent to purchase Gold as it is considered to be a safe haven for investment. It is beyond an adornment metal, it is a symbol of security,“ feels Ranjani Krishnaswamy, General Manager, Marketing, Jewellery Division, Titan Company Limited.

Ranjani says that the market is opening up like never before and it’s a positive sign. “We are witnessing a surge in sales, which can be attributed to a demand which has been repressed for some time and has resulted in revenge buying. The celebratory mind-set of our returning customers looking to celebrate personal milestones will also add to the demand,” claims Ranjani.

“Most of the weddings planned in Q1/Q2 have been deferred to Q3/Q4 and we are expecting the demand to rise further. We believe the share of wallet for wedding jewellery purchases will remain largely unaffected despite the new normal with wedding ceremonies being a closed knit affair. While families will not resort to lavish weddings, they will certainly look at gold as an embodiment of an auspicious beginning,” adds Ranjani, who has spearheaded Tanishq on attaining an undisputable spot in the jewellery market.

Leshna Shah, Founder & Chief Creative Director, Irasva thinks these unprecedented times have certainly affected the jewellery industry and we will have to wait and watch how the market reacts. But, at the same time the customer demands will move from heavy jewellery buying, during occasional and festive times to more minimalistic and everyday wear spends on jewellery. “As people spend less on travel and lifestyle expenses, jewellery will surely benefit from a part of this unspent income,” suggests Leshna.

History provides a hope to the jewellery industry

Abhineet Boochra, Director – Sangeeta Boochra & Silver Centrre is of the opinion that the spark will definitely return to the jewellery business. He puts a rather sharp point across as he draws a leaf from history to cite that currency is printed based on the gold reserves of any country, which means anything can fail but jewellery will never fail. “History repeats itself. The world has seen worse times when kings, politicians and heads of states fought against various enemies, weathered natural calamities and war etc. The issues were tackled on the basis of the treasury and investment which comprised jewellery and currency. When the barter system started, it was based on precious metal only and we cannot blind sight what has existed for centuries. Hence, I feel that there is a possibility that it might be difficult for other businesses to survive during this pandemic but jewellery specifically would not be one of them,“ claims Boochra confidently.

Another interesting factor that has made jewellery makers optimistic is the fact that the wedding industry is seeing a shift in trends, smaller weddings but more memorable ones. As of today, buying has become need based rather than indulgence based. The grandeur of weddings is shrinking with less number of people and the focus in all likelihood will shift to jewellery. Boochra feels brides would want to invest more in jewellery for weddings as it would be a safe haven for their money. “In India, weddings are a status symbol and hence, jewellery will play an important role in displaying power and luxury without making noise about it. In my opinion, brides of 2020-21 will invest and buy more jewellery as compared to other years. Jewellery will mark its top position. Gold and silver being the safest bets to invest in, and also being an appreciating asset which can be quickly liquidated as well with a fair market price which can be tracked from MCX means jewellery will see no downside,” concludes Boochra.

Vinay Gupta, Owner of Shriparamani Jewels shares a similar sentiment as he says that jewellery is always taken as an investment and even if there is a recession in the market, the jewellery industry has never gone down because people really want to invest some part of savings.

Gupta suggests that the market is all set to witness a never seen before spike in sales. “The gold rates will definitely go high in coming times and due to the upcoming wedding season, people won’t restrict themselves from buying jewellery. Previously, people used to plan destination weddings but now looking at the current situation there will be a decrease in this trend and the budget of the same could be driven towards buying jewellery. I think brides will now spend more on gold jewellery as gold is becoming a very promising security for any individual,” claims Gupta.

Italian Exhibition Group and Vicenzaoro give voice to the gold and jewellery world: Voice will debut, from 12th to 14th September in Vicenza, at the Expo and in the city.