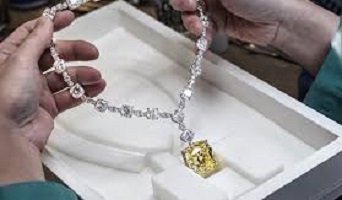 Discovered in 1877 in the Kimberley diamond mines located in South Africa, the Tiffany Diamond will be making a special cameo in the upcoming film, based on the Agatha Christie novel.

The incomparable and, arguably, one of the most famous pieces of jewelry, the 128-carat Tiffany Diamond, will make an appearance in the new 20th Century Studios daring mystery-thriller ‘Death on the Nile’, which will be released in cinemas later this year.

When discussing the beauty of the iconic gem – originally made famous by Audrey Hepburn, Tiffany & Co.’s Chief Artistic Officer Reed Krakoff stated “…the Tiffany Diamond is a priceless symbol of the highest standards of virtuosity and craftsmanship at Tiffany, and rarely makes an appearance beyond its vault. A central role in the adaptation of Agatha Christie’s classic novel is deserving of our priceless diamond.”

A part of Tiffany’s archive collection dating back to the early days of the firm, the dazzling stone has a historic past within Hollywood. Last worn by Lady Gaga at the 91st Academy Awards, it’s one of the largest yellow diamonds ever discovered and now will only have been worn by four women in total.

First, it was shown on Mrs E. Sheldon Whitehouse at the 1957 Tiffany Ball, subsequently and often most notably it was worn by Audrey Hepburn in the 1961 publicity photographs for the iconic ‘Breakfast at Tiffany’s’. Following this it made its thrid appearance on the neck of Lady Gaga at the Oscars in 2019.

The piece was customised to fit the singer, which was based on a piece created in 2012 to celebrate the 175th Anniversary of the company. The Oscar winner paired the iconic necklace with a black Alexander McQueen strapless dress, reminiscent of the famous Givenchy gown worn by Audrey Hepburn in the otherwise historic movie.

In October 2020 it will be at the centre of the plotline for ‘Death on the Nile’, alongside other Tiffany designs; the film is set to debut in theaters on October 23. The star-studded film features the likes of Tom Bateman, Annette Bening, Kenneth Branagh, Russell Brand and Armie Hamer, to name a few. Many cultural highlights of Egypt, where the film is set, will be featured within the murder mystery such as the great Pyramids, the Sphinx, and the temples of Abu Simbel and Karnak.

The Tiffany Diamond has truly travelled the world as a centrepiece of numerous exhibitions, always returning to its home at the Tiffany flagship store on Fifth Avenue in New York City where it is is sometimes kept on display for all to view.

Don’t miss out on catching a glimpse of this iconic piece in ‘Death of the Nile’ this October 2020.

How a loan rejection created a $300-million gold-loan startup