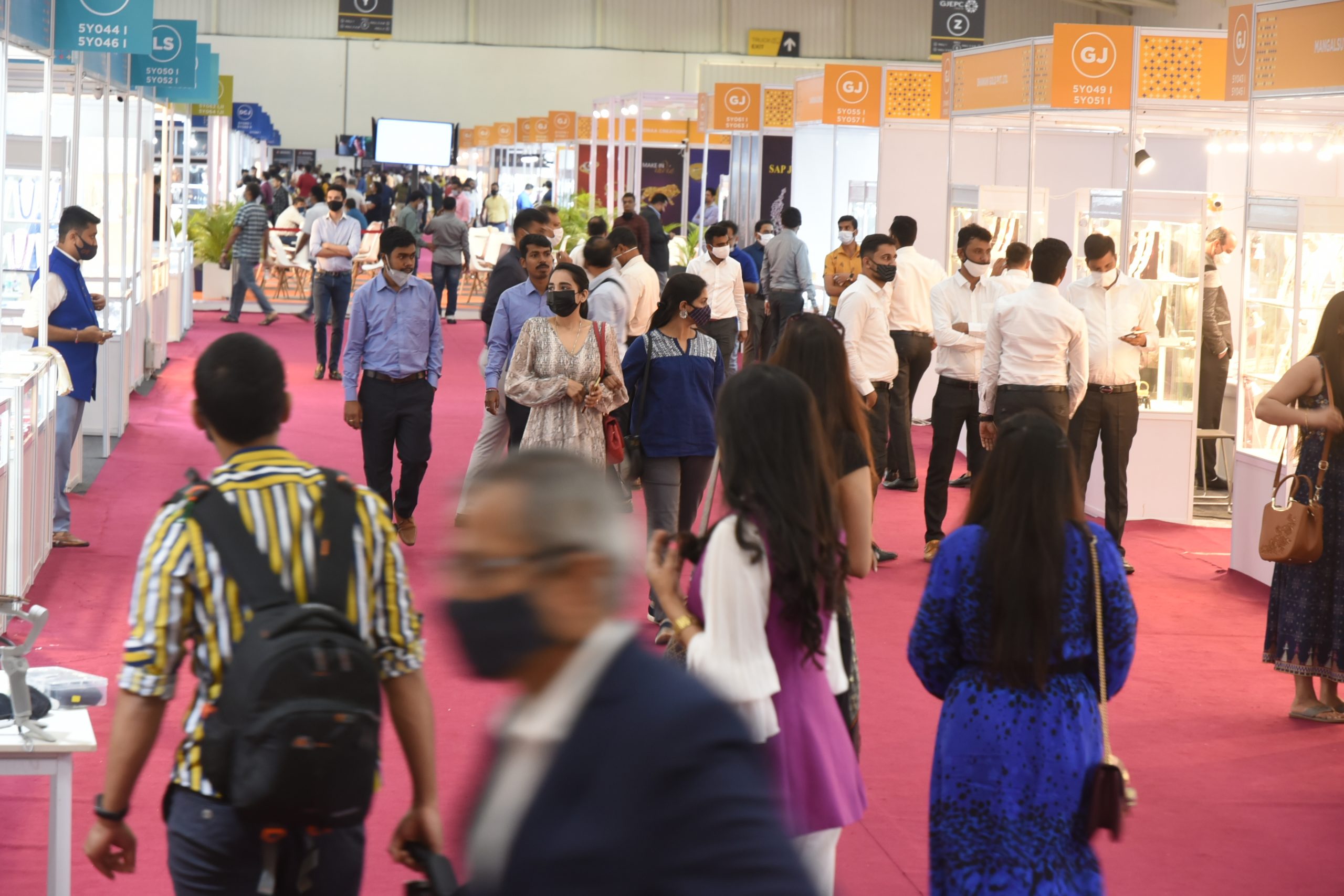 Mumbai: In more ways than one, the 37th edition of IIJS Premiere 2021, the flagship trade show held in Bengaluru by the Gem & Jewellery Export Promotion Council (GJEPC), revived the moribund economy, not just that of the gems and jewellery sector, but all the peripheral sectors associated with the organising of the show, including transport, hotels, retail, and restaurants. Thanks to the IIJS mega expo, many hotels in Bengaluru reported 100% occupancy around the show dates.

IIJS was also the world’s first largest physical-only show held since Covid began, with the participation of 1,300+ exhibitors and over 21,000 visitors, including more than 300 international buyers. Although a couple of big international shows were held prior to IIJS, they were essentially hybrid online-offline formats.

India’s largest and Asia’s third-largest show overturned all the initial scepticism surrounding the pandemic. The five-day show, has generated an estimated business worth USD 6.75 Billion! The success of IIJS Premiere 2021 is a clear indication that the gem and jewellery industry has shrugged off the pandemic’s effects on the sector and the economy at large.

While everyone loves a success story, pulling off a trade show of this magnitude – the biggest gem and jewellery trade event of 2021, according to GJEPC estimates – required intense deliberations and micromanaging, to ensure full compliance with safety norms. A major hurdle was the relocation of IIJS Premiere. The show had to move out of its permanent base for almost 30 years, the Bombay Exhibition Centre in Mumbai, as the state reserved it as a Covid centre until early 2022.

The Council with the help of the Karnataka Government ensured that the Bangalore International Exhibition Centre (BIEC) was a bio-bubble. It was mandatory for every person attending the show to get at least one dose of vaccination with a negative RT-PCR test done at least 48 hours prior to entry. The venue had a Covid Testing Centre along with an ambulance, quarantine room, and a doctor on call.

Colin Shah, Chairman, GJEPC, said, “We are delighted that IIJS Premiere has generated an estimated USD 6.75 Billion-worth of business. We are already witnessing a surge in exports and are confident that the industry will achieve the export target of $43.75 billion this year and contribute more than 10% of Hon’ble Prime Minister Narendra Modi’s target of achieving $400 billion in total merchandise exports.

“IIJS would not have been possible without the unstinted support of the Karnataka State Government to help us organise this show successfully. An event of this size and scale needed a great venue, and we are glad that the BIEC stepped up to help us organise it.”

The rising price of gold pushed manufacturers to rethink their product lines by marrying economics and aesthetics. Minimising the weight of gold was a priority. At IIJS, one saw a huge variety of designer lightweight collections. Plain gold jewellery lines were voluminous, cast instead of handmade featuring negative spaces.

The embellishments were in the form of varied metal textures – high polish, satin, matte, brushed, grainy, embossed, and hammered finishes.

Colour was introduced by way of pastel enamels, gemstones such as spinels, morganite, multi-coloured sapphires and fancy colour diamonds.

Business boomed and the long spell of demand drought finally ended. It opened the floodgates, as IIJS exhibitors were busy booking orders on the very first day itself. Many diamond and gold jewellery exhibitors were overbooked by Days 2 and 3, and they were reluctant to take in more orders for fear that they would be unable to honour prior commitments, having reached maximum capacity.

Of the 21,000 visitors, IIJS received more than 300 international buyers from countries such as Bangladesh, the UK, USA, Thailand, Singapore, Australia, UAE, and Nepal, who placed orders across all jewellery categories.

Consumer demand has been picking up in the domestic market. With over 80 crore Indians vaccinated with one dose, life is already returning to normalcy. With more disposable income on hand, buyers are investing in classic jewellery pieces for their intrinsic value.

The five-day show was attended by several dignitaries like Anupriya Patel, Hon’ble Minister of State for Commerce & Industry, Ministry of Commerce & Industry (through video conference), who hailed the industry for being the world leader in diamond cutting and manufacturing, and one of the largest exporters of gems and jewellery.

Expressing delight about the show being hosted in Karnataka, Nirani, elaborated on the opportunities that the state could offer to the gem and jewellery industry. He said, “Karnataka is the only state which produces gold from the Hutti Gold Mines and the Kolar Gold fields. We are aiming to increase the production from 1,700kg to 5,000kg. We will be opening jewellery retail stores to promote gold and sell gold coins; we’re hoping to partner with private jewellers.” He urged the industry entrepreneurs to attend the Karnataka Global Investors Meet in November 2022 to explore business opportunities.

As per its annual ritual, the GJEPC organised Jewellers For Hope (JFH), a charity gala dinner to raise funds for non-governmental organisations (NGOs) that are active in the field of education, health, and women empowerment. This year’s JFH beneficiaries were Udayan Care, a public charitable trust working to empower vulnerable children, women, and youth across 15 states of India, and SDA-Diamond Hospital & Medical Research Centre, a multi-speciality hospital that has been providing holistic healthcare services to lower and middle-class society at minimum charge from the last seven years.

Bommai said, “The state of Karnataka is setting up a Gem Park and reached out to GJEPC to explore the opportunity. The artisans of the industry have almost no formal education, despite this it’s their skill that makes them stand apart from others. The value of jewellery accounts for the hard work that’s been put in by artisans. Our skilled artisans in the gem industry are considered amongst the best in the world.”

The show’s Organiser-In-Chief Shailesh Sangani, Convener, Exhibition (National), GJEPC, stated, “The 37th edition of IIJS Premiere 2021 held in a physical avatar post the pandemic, was possible due to the wholehearted support from all stakeholders, including exhibitors, buyers, the Central Government and the Karnataka State Government. Everybody has played an important role in successfully putting up a show of this stature.”

Prior to the session, the Commerce Minister visited all the five expo halls and spent nearly two hours interacting with the exhibitors.

Goyal said, “It is a pleasure to be at IIJS Premiere 2021 that has shown all the hard work and dedication put forth by multiple retailers, exhibitors of the gems and jewellery sector in India. The current Government policies have been formulated keeping in mind all the concerns and aspirations while encouraging them to venture past the government initiatives at present. The creation of a ‘Credit Guarantee Fund’ could help manufacturers overcome financing issues and facilitate smoother trade.”

More than 100 leading manufacturers, retailers, exporters, trade associations, international buyers participating at IIJS shared new advancements, initiatives, and other industry-related issues directly with Piyush Goyal. At the event, the Minister unveiled the Cluster Mapping Report by The National Council of Applied Economic Research (NCAER) and GJEPC, which has enabled the industry to identify clusters for gem and jewellery manufacturing to boost exports.

In response to the recommendations regarding policy-related matters put forth by Colin Shah on behalf of the industry, Goyal offered practical suggestions. He encouraged manufacturers to set up lab-grown diamond (LGD) machines rather than depending on the Production-Linked Incentives Scheme. “LGDs have the potential to catch the fancy of the middle class,” he noted. Goyal hailed the Rs 11,000-crore Jewellery Park project that will be set in Navi Mumbai. As for the FTAs, he informed that there is every possibility to sign up one with Australia once the international covid restrictions are lifted.

The Minister concluded his talks by reiterating the fact that the industry must be self-reliant and self-regulatory.

Panels to oversee melting of temple jewellery in Tamil Nadu