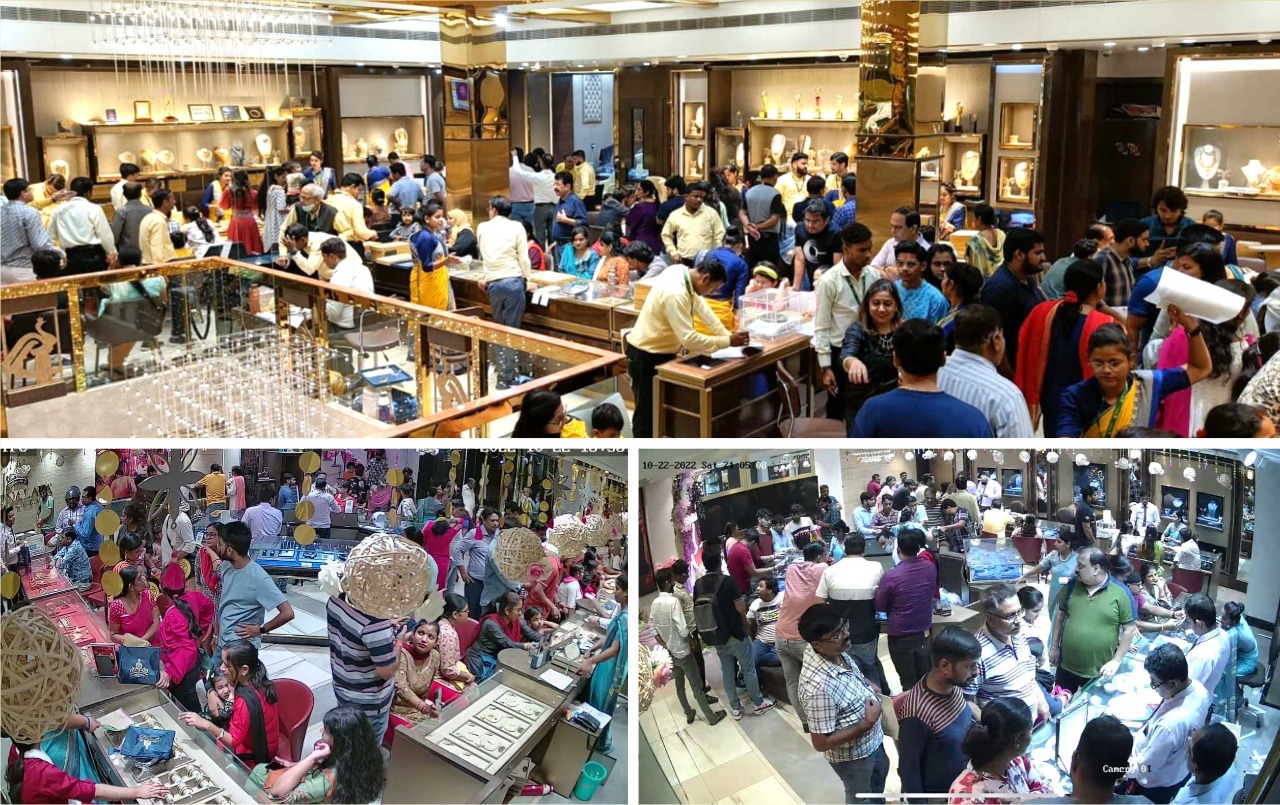 The auspicious occasion of Dhanteras saw robust sales of gold, jewellery and coins this year. According to Ramesh Kalyanaraman, Executive Director, Kalyan Jewellers, the brand registered robust pre-bookings for purchases. Further, this signals the revival of Indian gold jewellery market from the vagaries of pandemic. Pankaj Arora, National President, All India Jewelers and Goldsmith Federation, said that the demand for gold has reached ‘its peak’.According to Surendra Mehta, national secretary, India Bullion & Jewellers Association (IBJA), a favourable monsoon and a festive sentiment catalysed this demand boom. IBJA also accredits this year’s weekends-long Dhanteras with the sale of 39 tonnes of gold with a cumulative value of Rs 19,500 crore. Let’s take a look at the market behaviours that welcomed such a change.

Business for Prasad Jewellers were more than 40-45% as compared to last year. They have seen good movement in chains, necklaces, and earrings in gold jewellery. Pandit Jewellers from Bulandshahr also achieved 20% higher sales as compared to the last year and almost achieved the same volume (quantity-wise) as compared to 2019.Siddhart Choksi, Tirupati Jewellers said, “The sales were double than what we have had in the previous years.”

This year, the muhurat spanned for two days, which helped the jewellers with more sales.

Mohit Prasad, Owner, of Prasad Jewellers, Rourkela said, “The crowd was normal on the first day. However, there was a heavy rush of customers on the second day. Out of the overall customers, almost 70% were new customers.”

Gaurav Gaur, Director, Pandit Jewellers, Bulandshahr said, “We saw robust sales this year. As the Dhanteras muhurat remained for two days, the crowd was divided and the rush could be easily managed and streamlined. Generally, we witnessed heavy rush on Dhanteras day and thus it becomes difficult to cater to the customers. Middle-class and lower middle-class customers prefer to wait till Dhanteras to purchase gold jewellery.”

Bharat Sheth, Managing Director, Batukbhai Sons and Jewellers, Nagpur agreed with Gaur and said that Dhanteras typically leads 40% of customers to leave because of heavy in-store rush. “This year, the footfalls increased by almost 20-25% as compared to pre-pandemic times. Out of the overall customers, 25% were new customers. There was so much demand for coins that the stock got over even before the completion of the first day. We had silver coins in 10, 20, 50, and 100 grams, whereas in gold, we have 1, 2, 5, and 10 grams and pooja articles made of silver had also seen good movement.” Out of the gold jewellery sales, rings, bangles, and mangalsutras saw good demand from the customers. Temple jewellery was also on high demand.

Shikhar Agarwal, Director, Kamna Jewellers, Bulandshahr said that the two-day festivity increased the capacity to attend to customers and check underselling through simpler products as people usually avoid waiting it out in queues. “The big-ticket items also saw good demand from the customers who came with an open mind. The second day had an India-Pakistan match and the sales picked up once the result went in India’s favour. Suddenly, I felt that the purchasing power of the customers increased as they were very happy. Out of the overall sales, bullion was around 15-20% which was around 40% in 2019 and the rest 80% was jewellery, which was around 55-60% in 2019.”

Good demand for bullion as well as gold jewellery

Prasad Jewellers faced unprecedented demand for silver coins and the stocks were sold out on the first day itself. Of the overall sales, 10-15% were bullion and the rest comprised of jewellery sales. And out of the total jewellery sales, diamond jewellery was between 15-20% and the rest 80-85% was gold jewellery.

Out of the total sales, 30% was of bullion, an impressive growthfrom around 20% of the share in 2019.The rest was injewelleryforBatukbhai Sons and Jewellers.

Abhishek Jain, Shree Mahavir Jewellers, said, “Jewellerycomprised of 80%, whereas, coins (mostly 5 and 10 grams) consisted of 20% sales. In jewellery, wedding segment was around 50%. The first-day sale was more which would be up to 70% of the overall sale of both days combined. However, the second day inched near 30% sale.”

Siddhart Choksi, Tirupati Jewellers, said, “Jewellery was around 80% and coins accounted for 20% of the sales. In jewellery, wedding jewellery alone accounted for 75% of the sales as the wedding season will commence soon. The first day’s sale was maximum with 90% and the second day was 10% sale of the overall two days.”

NAC Jewellers partner with The Belstead to host ‘Spooktacular Fest’