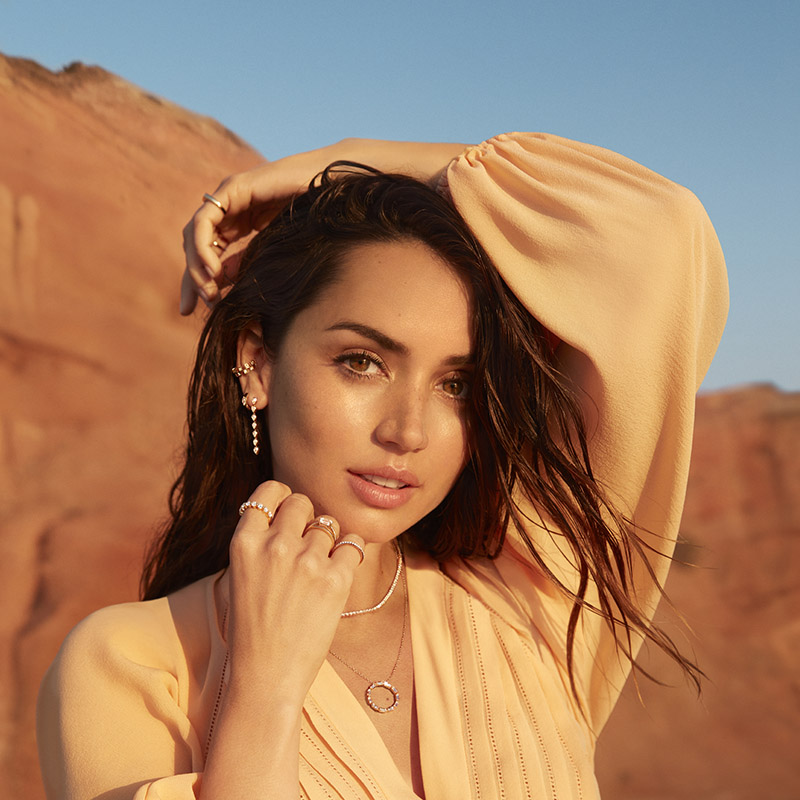 Diamond is one of the world’s most sought-after and adored gemstones. April marks the month of natural diamonds. People born in April can consider Diamonds as birthstones and wear diamonds to get favourable outcomes.

It is believed that this provides the wearer with better relationships and an increase in inner strength. The history behind the diamond, its strength, and its believed power have transformed this rare stone into an irresistible, sentimental, and eye-catching treasure, which will be passed on for generations to come.

Lara Dutta is an Indian actress, entrepreneur and the winner of the Miss Universe 2000 pageant. She is known for her role in the movies such as Kaal, No Entry, Jhoom Barabar Jhoom, etc. Born on 16th April, she fits in perfectly with the Diamond month theme. Her diamond engagement ring is her favourite piece of jewellery. She can be seen rocking this ring gifted to her by her husband Mahesh Bhupathi.

The Kabhi Khushi Kabhi Gham actress is a diamond month diva. She is elegant, beautiful and strong, just like the gem that represents her birth month. Just like a true Arian, she is brave and fierce. This can be seen in the way she carries the different diamond jewellery trends, beautifully and elegantly. She can often be seen wearing diamonds for different occasions.

She speaks about applying these lessons in her motherhood journey. “Mother nature care takes so many forms as she protects and cradles everything she creates – like Natural Diamonds that are made resilient just like every mother”, she says.

You can read more about it on: Nature Made Me A Better Mom.

The actress Ana de Armas is a bonafide rising superstar in Hollywood. She is the new ambassador for Only Natural Diamonds. Hollywood rising star and new Bond girl Ana de Armas speaks why she believes in the sustainable future of the industry.

You can read more about it on Exclusive Interview: Ana de Armas as New Global Ambassador for Only Natural Diamonds

This Indian actress, fashion designer, and television presenter is one of the most beloved of our times. Her early roles in Dilwale Dulhaniya Le Jaayenge, Shanti, etc won the hearts of many.  Born on 15th April, she is one of the Diamond Divas to celebrate. She can be seen donning a diamond bracelet, necklace, earrings and ring.

Jennifer Garner is an American actress and producer.  Known for her roles in 13 going 30, Juno, etc. Her diamond engagement was the talk out the town. It was a dazzling 4.5 cushion-cut sparkler. The elegance with which she carries these jewels shines as bright as her diamonds!

Emma Watson known for her role as Hermione Granger from Harry Potter is loved and known by many. She is also known for her role of Belle in the Disney movie- Beauty and the Beast. Just like other April-born divas, she is confident, bold and strong. She can be seen donning powerful and fierce-looking diamond jewellery.

Jacoba Francisca Maria Smulders is a Canadian-American actress. She is best known for her starring role as Robin Scherbatsky in the CBS sitcom How I Met Your Mother and as S.H.I.E.L.D. Cobie, who plays Emma in “Delivery Man” wore diamond drop earrings in platinum, diamond line stacking bracelets and diamond rings. She can be seen sporting diamond jewellery at many award functions.

Pharrell Lanscilo Williams is an American singer, songwriter, record producer, fashion designer and entrepreneur. Alongside close friend Chad Hugo, he formed the hip hop and R&B production duo The Neptunes in the early 1990s, with whom he has produced songs for various recording artists.

Williams is serving as honorary advisors to the initiative, while star stylist Jason Rembert, whose clients include John Boyega, Rita Ora and Issa Rae, joined Schwartz alongside NDC CEO David Kellie and other jewelry experts on the selection committee.