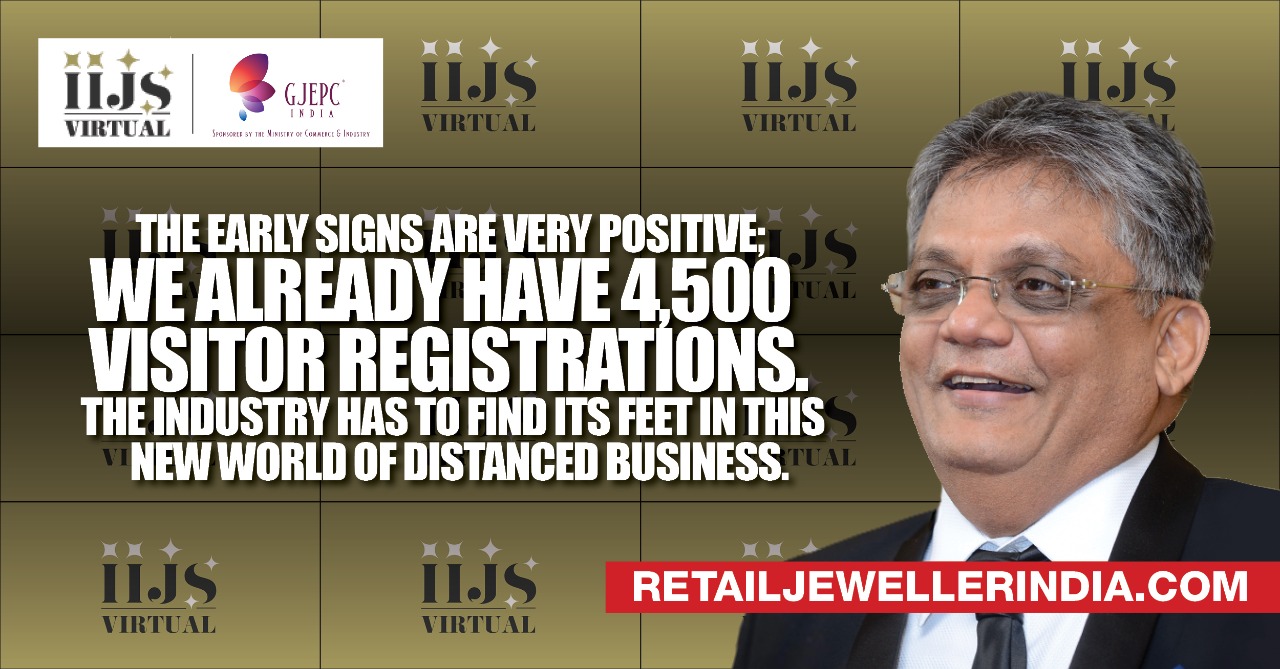 A die-hard believer in the resilience of the gem and jewellery industry and aware of the sudden lacuna in trade facilitation by exhibitions, Shailesh Sangani, convener of GJEPC exhibitions and an industry veteran for over three decades, speeded up plans to roll out the first digitized version of IIJS. In a candid conversation with Soma Bhatta he unfolds his plans for the most advanced technology-aided buying experience that not only simulates buyer–seller interactions at the physical show, but also assures of enough pre-show educational material and real-time guidance to help retailers and manufacturers smoothly adapt to the new normal of b-2-b trading.

IIJS, which was earlier scheduled for January is now taking place in October. What are the market indicators which support this sudden change?

Despite the economic downturn, retailers are hopeful of a relatively good season. The confidence in gold and the impending weddings will significantly boost sales in the festive season. It reinforced our decision to conduct the show early, even as we pulled out all stops to create the finest digital platform in record time. In terms of business, we expect to hit 40% of transactions that would have come from a physical show.

How do you think the industry will adapt to the new digital version?

The early signs are very positive; we already have 4,500 visitor registrations. The industry has to find its feet in this new world of distanced business.  There is no sign of a silver bullet as the vaccine progress is slow. The new normal compels us to look at innovative ways of collaboration as we really do not know how long this situation will last. The proverbial saying, ‘change is the only constant’ has never been more true.

The industry is grappling with new technology-aided buying tools due to low exposure and unfamiliarity with technology. Do you have plans to assist the trade to navigate a digital show of such a big scale?

We are aware of the changes that the trade is dealing with. We also know that there is a lack of tech-savvy attitude. To support the trade into a smooth transition from a physical show to digital, we have already introduced educational material, which are easy to understand.  Those who are keen will adapt quickly. Some of the learning will assist them in their business beyond the show.

We have brought down the number, primarily on account of two reasons — it’s a new version, our first too, so we decided not to stress the systems. Secondly, we are aware that the markets are slow and not everybody will want to avail of this facility. But it will not significantly impact the choices as we have cut down on machinery, media and other allied categories, and only focussing on jewellery.

What are your plans for the show that was earlier scheduled for January?

The January show will take place as planned. Looking at the present circumstances, we are likely to top up the physical show with another digital layer. It will primarily accommodate all who don’t get access due to the social distancing measures imposed by the government.

We are living in highly uncertain times with no agency over the future. How confident are you of executing the October digital show?

Many members in the GJEPC office have been affected by the virus. We work in a small team and if more people contract the infection, we may be compelled to cancel the show. If that is to happen, we will not conduct it anytime soon as retailers will remain busy with the main-season business. The next show will be in January as scheduled.

Holding up a MirrAR to your customers: A digital solution for the new normal