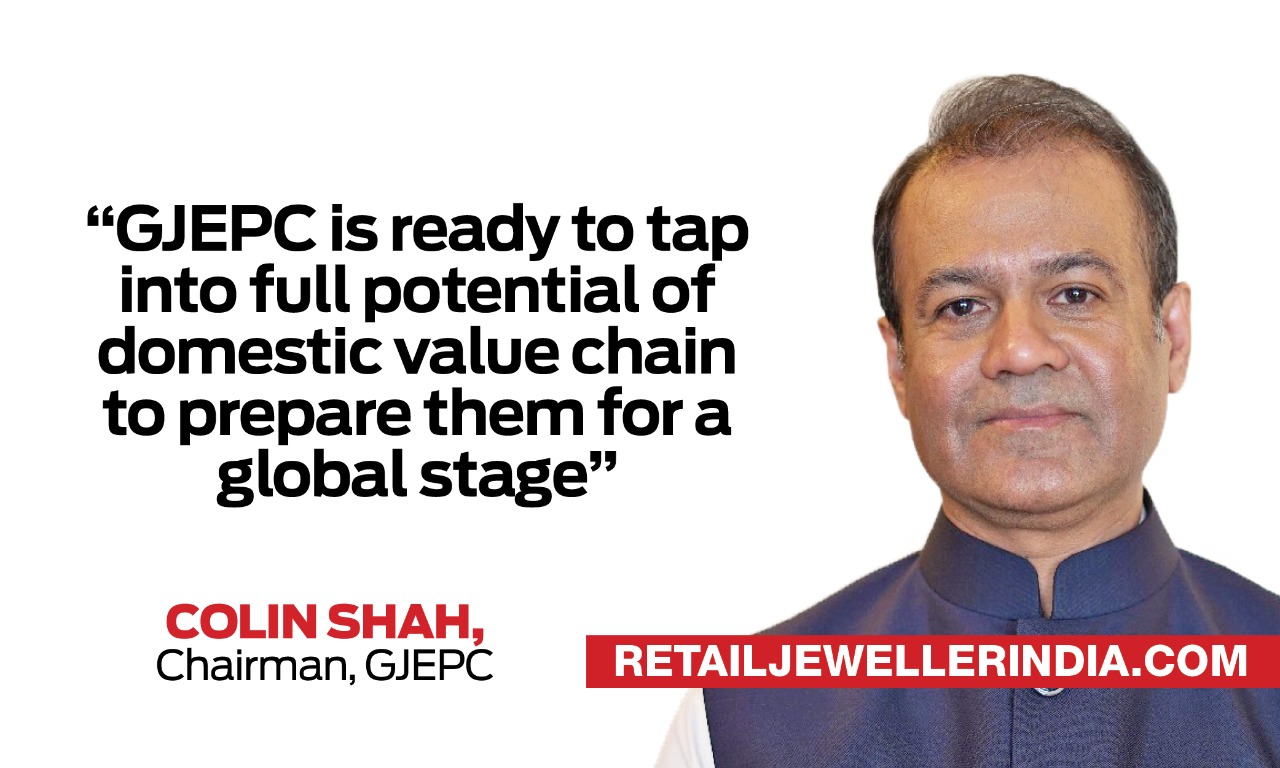 Soma Bhatta (SB):  IIJS is making a strong comeback post-Covid with a slew of new trade shows in different formats. What is the driving force behind this new approach?

Colin Shah (CS): IIJS is one of the five global trade shows that stood the test of time. Growing from strength to strength, we are starting the 37th show after a hiatus of nearly two years. There is a new energy to revive the trade sentiment. Our decades of proven expertise also make it possible for us to quickly scale up to introduce regional and boutique shows.

We see tremendous opportunity in creating access for retailers in hinterlands through regional shows. The boutique show aligns with the larger need of retailers to buy specialized jewellery.

Unlike most other trade shows, there is a larger altruistic purpose to expanding our portfolio of shows. We channelize the profits to trade development. Our recent collaboration with World Gold Council and ongoing association with Natural Diamond Council is testimony to that.

TRJ: In a landmark initiative the GJEPC, often looked upon as the premier trade  body for diamond promotion, has contributed and collaborated with WGC.  How did it come about?

CS: GJEPC appreciates the efforts WGC has taken to summarize the buying preferences of today’s millennials, who give very low preference to gold. India is the second largest consumer of gold and persistence of such sentiments will severely harm the industry just the way it happened with Japan/Saudi arabia as an entire generation’s affinity for a segment wiped away. To stop the demand of gold from being hit and safeguard the industry, GJEPC is supporting WGC’s innovative campaign at all levels. We must do everything within our means to create relevance of gold for next generation of buyers.

TRJ: What role did GJEPC play in easing out the hallmarking policy for the industry?

TRJ: GJEPC is setting up the Common facility centres across India. How do you see it impacting the domestic trade in the long term?

CS: GJEPC has set up 4 CFCs for the diamond industry in Gujarat, and the latest CFC in Rajkot will be India’s first Common Facility Centre for Gold Jewellery Manufacturing under the CFC Scheme.

It will enable small and medium gem and jewellery businesses to have a chance at greater exposure. Our CFCs will facilitate advanced machinery to those businesses and karigars at a nominal cost. This will introduce promising, new players in the industry who would bring in diversity in terms of design and services. This will increase healthy competition and raise the standards of trade in the long term.

TRJ:  GJEPC’s main purpose is to boost the exports. However, it is often seen playing a key role in domestic affairs concerning Indian retailing. Please explain.

CS: We must understand an Indian jeweller’s route to exports to understand our viewpoint. Each manufacturer starts with the domestic industry, makes a mark significant enough to get exposure to jewellery exports. Our findings from the NCAR 2020 study show that there are so many clusters of manufacturers who have no idea about the export sector.

The same scenario persists in Turkish, Italian and Chinese jewellery industry where a manufacturer grows from the domestic to the export sector. Thus, one of GJEPC’s goals is to tap into the potential of manufacturers and retailers so that they upgrade design, quality and understand the service level requirement of the western market. Retailers too have the opportunity to expand their distribution to global markets.

The larger objective of GJEPC is to enhance Indian jewellery trade and exports. Thus, GJEPC, with its multifarious projects, is helping domestic players resolve that gap in awareness, process and embark on the roadmap to  overseas exposure.

Retailers will miss out a lot if they miss IIJS 2021. With 450 new exhibitors and a revived spirit of business, manufacturers will display their best

The annual De beers Forevermark forum 2021 is a milestone in itself; it symbolizes the cohesive force and combined belief of those who envision a glorious future for the natural diamond category. Each forum is a landmark in our journey to achieve the true potential of the category