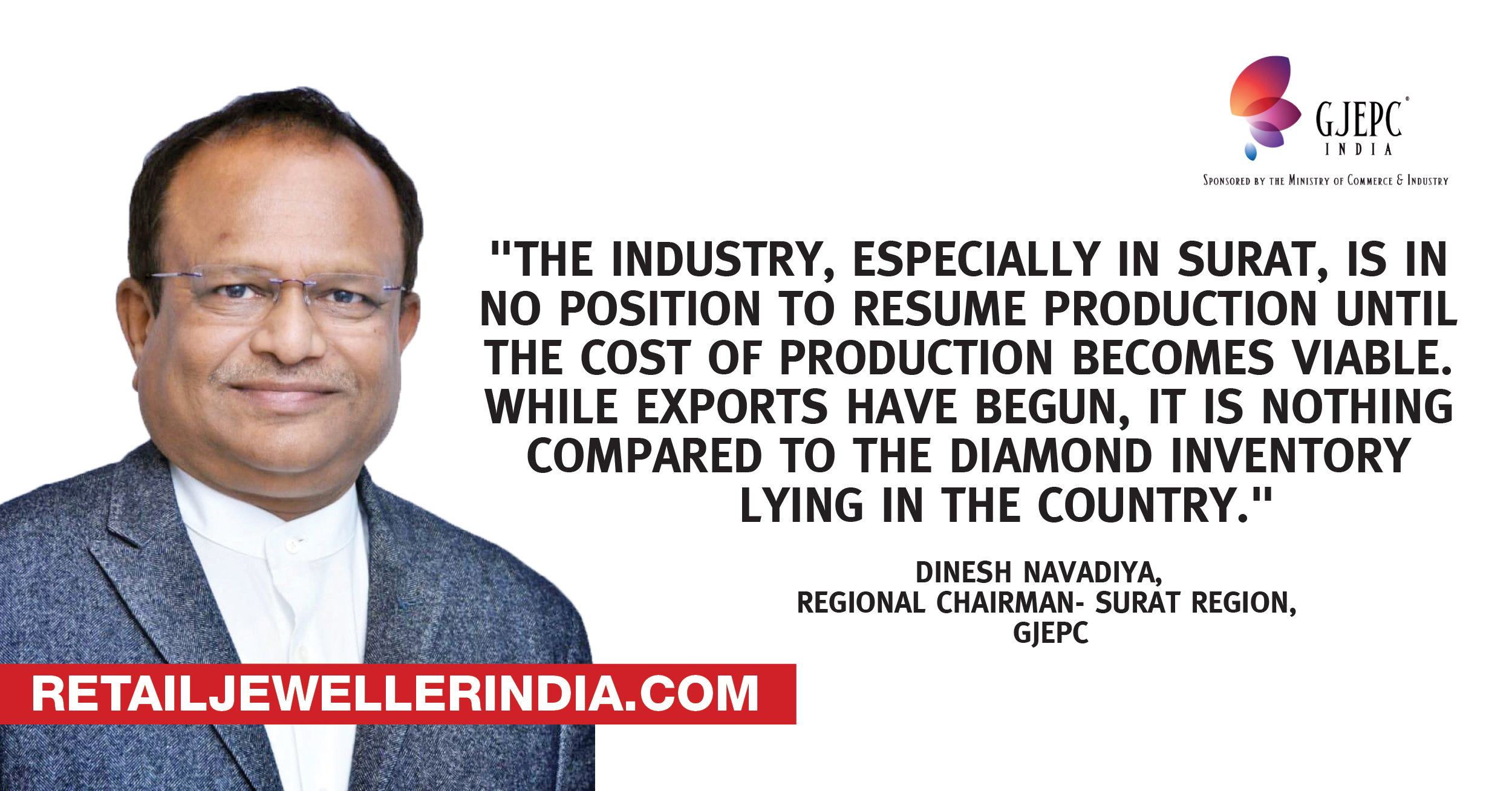 The diamond industry in Surat has heaved a sigh of relief with the resumption of exports, though in a small quantity.

Though exports to Hong Kong, a major destination for India’s polished diamonds, have resumed, the industry is currently sitting on an inventory worth around $2.3 billion. Initial exports are estimated to the tune of Rs 900 crore, which is minuscule when compared with the polished diamond inventory.

“The industry, especially in Surat, is in no position to resume production until the cost of production becomes viable. While exports have begun, it is nothing compared to the diamond inventory lying in the country,” said Dinesh Navadia, regional chairman of Gems & Jewellery Export Promotion Council (GJEPC).

After a meeting with the Customs authorities, the council was informed that the first 10 shipments were being exported from the Surat Diamond Bourse (SDB). Surat to Mumbai trans-shipment was done via air cargo.

“GJEPC is further coordinating with agencies to propose competitive charges to trans-ship the export parcels from Surat to Mumbai once or twice in a week based on the Hong Kong cargo flight connectivity to enable members to start exports. GJEPC is also coordinating with district authorities to permit interstate road transport,” he said.

Around 60 export shipments have been processed by the SDB for their transfer to Mumbai, with the Surat collectorate granting interstate travel permission to 24 entities for the collection of inventory.

“Roughly over two months of inventory is lying with the industry. Since social distancing in the diamond industry is not possible while maintaining productivity since at least three-four workers simultaneously work on one stone, the resumption of normal production will take a few months.

Besides, while Hong Kong may have opened up, there are concerns over the purchasing power of consumers and demand for diamond globally,” said Kirti Shah, a diamantaire.

“In January, the price of rough diamonds had risen by 15-20 per cent, but as the virus started spreading across the world, the price of polished diamonds fell 15-20 per cent, leaving traders and exporters in a lurch. First, it is now uncertain when will businesses resume and payments for the exports be made. Second, while the import price for rough diamonds may have fallen of late, the rupee has depreciated, leading to more payment being made in dollar terms,” Shah said.

Meanwhile, among other steps for easing pricing pressure, diamantaires have reached out to grading laboratories like GIA, HRD, and IGI, requesting them to reduce fees for diamond grading certificates, Shah added.

India, the world’s biggest consumer of gold after China, imported its lowest monthly volumes in at least a decade after curbs to control the coronavirus pandemic grounded air transport and shuttered jewellery stores. Overseas purchases slumped 99.5 per cent to 60 kg in April from 13 tons a month ago, according to a person with knowledge of provisional finance ministry data. That would be the lowest monthly inflow in records going back to 2010, according to the data available with Metals Focus . Finance ministry spokesperson Rajesh Malhotra wasn’t immediately available for comment.