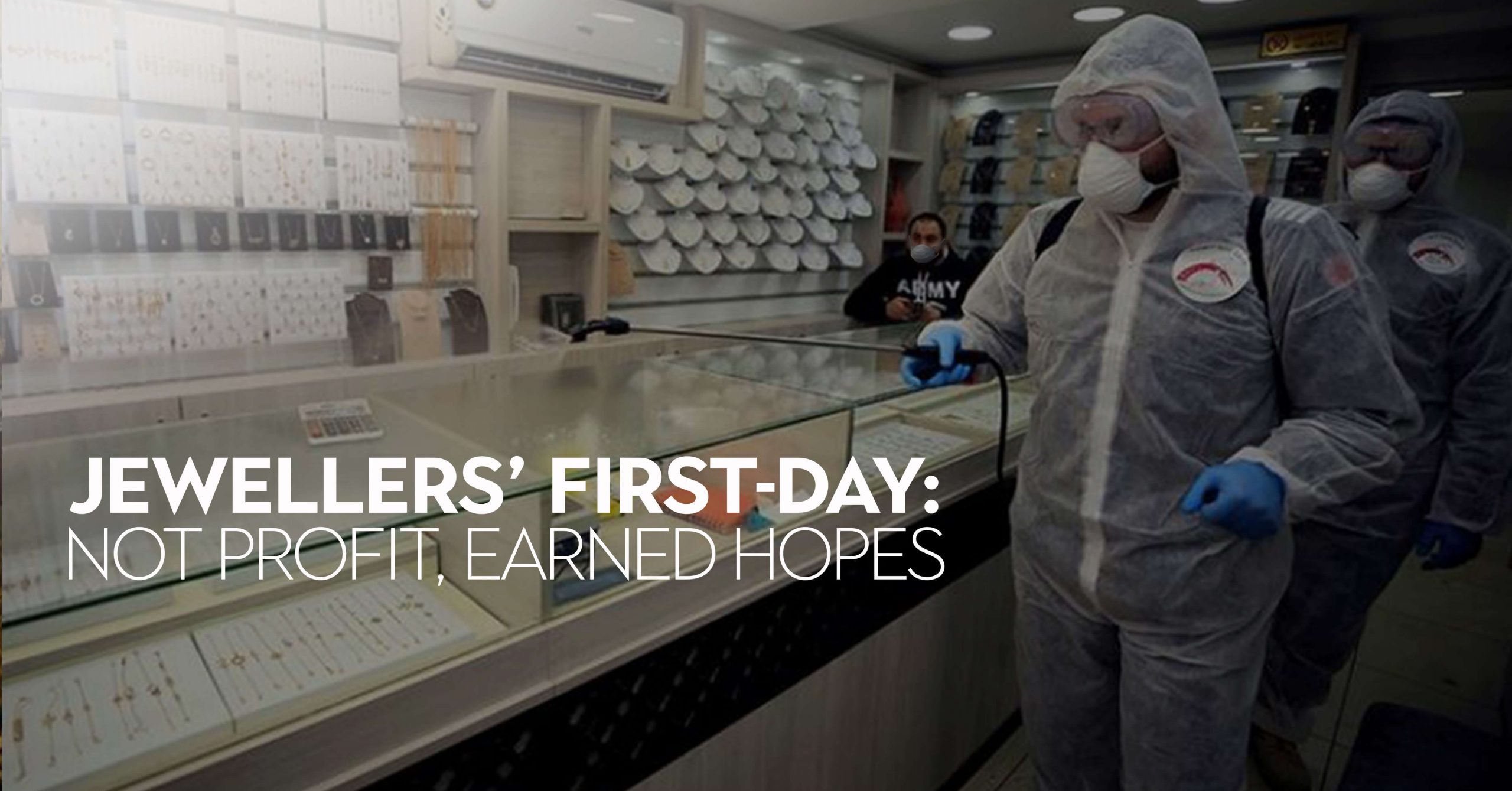 Finally, the shutters have rolled up, the jewellery stores have been opened and with that, hope is building up with each walk-in customer. Read on to know how the day-one panned out and how thinking retailers are quickly adapting to the new rules of retailing in the post-COVID era.

As soon as the fear of the Coronavirus gripped the nation and lockdown was announced, jewellers feared if the thought of buying jewellery will ever cross customers’ minds in the midst of this global crisis and how long will they take to come back to the store. On the contrary, as soon as the government relaxed the lockdown on May 4 and the jewellery stores reopened, it was nothing less than a surprise and a pleasant one at that to see a few of them actually turning up and making the purchases. Even though no big-ticket purchases were made, it was indeed a glimmer of hope.

Yes, the sales have been not like the one jewellers register on a normal day but yes, the fact that the customers showed up was enough to keep the morale highand remain hopeful in the future.

Reflecting similar sentiment, Bengaluru-based jeweller, Pratap Kamath, Director Abaran Timeless Jewellery, who opened his store for seven hours, with limited staff, informed that more walk-ins were registered for jewellery SIP programme as people mostly turn up to pay their instalments. About sales on the first day after lockdown, he said it was majorly for small-ticket items and casual wear jewellery. “But the important thing is that people came and that was a big boost. It a sign that everything would be back to normal soon,” he acknowledges.

Another jeweller from the same neighbourhood, Vinod Hayagriv, Managing Director, C Krishniah Chetty Jewellers Pvt. Ltd. (CKC), who opened four out of his six showrooms, too was happy about the turnout of customers. “The business was also between 25 per cent and 50 per cent of the normal days depending on the showroom. No one came to sell their old jewellery at any of the showrooms,” he delightfully adds.

Even Vikram Verlekar, Director, Ulhas Jewellers of Goa, who had sent messages to about 25,000 customers informing them about the opening of the stores, was gushing about the first-day’s response. His store saw in all 12 customers who bought small ticket jewellery items such as rings and earrings. “Before the opening, there were speculations that few customers might come to sell their old jewellery but it was not the scene,” he reveals.

Although there was a little bit of confusion with respect to all the notifications issued by the Central as well as state government, Binaisa Zaveri, Director, TBZ-The Original, Mumbai, states that the mood of the customers was very positive and energetic when they walked into the store. “There was high interest amongst customers and that is the most important thing,” she asserts.

Giving a brief account of business on the day one, Zaveri says that the walk-ins can be divided into three types – 20 per cent of the customers came to buy jewellery after their jewellery deposit schemes got matured, around 40 per cent of the customers were our regular buyers and the rest 40 per cent were those who ordered jewellery for later days. “All in all, we can say that we had a 100per cent conversion rate on an opening day. The new walk-ins particularly bought plain gold jewellery,” he adds.

In the times when jewellers have been least expecting, the sight of even a few customers is a silver lining.

For some, the way first-day panned out is food for thought. Jewellers are making their notes for what to expect from the Corona-weary customers. There were conjectures that more and more customers will go for resale and that jewellery would be the last thing on their mind but to everyone’s surprise, the first-day scene was anything but as predicted.

Ramesh Davanam, CEO, Davanam Jewellers, Bengaluru, who states that the response was lukewarm but was pleased to see customers stepping out of their homes and coming to the store. “Majority of the customers came to pick up their pending orders or undelivered items which got stuck because of lockdown. But must say, about two per cent of the customers bought new jewellery too,” She adds.

Low sales certainly dampen the spirit but in the times of the Corona crisis, the sight of customers is a sign that happy days would be here again and soon.

Sales have been all about meeting and greeting people. But with changing times, the ways evolve. As social distancing is becoming the new normal for the post COVID world, there is no getting away from the government guidelines to ensure that. Taking cognisance of this changed scenario, jewellers have introduced a set of instructions for their staff to follow.

With limited strength of staff present for the day, CKC ensured that the staff as well as customers are following the safety measures as per advisory, including provision of an isolation room facility in each of their buildings. “We took strict measures on social-distancing right from the first day and will continue to ensure that it is practised always,” assures Hayagriv.Every jeweller is following the government’s directives with full sincerity. “The company has planned to run the business for next two months with 33 per cent staff growing each fortnight reaching 100 per cent in about 45 days or as the government directs,” he adds.

As the opening of stores depends on the states, retail chains started operations in a few states where the lockdown was relaxed. Reliance Jewels therefore could only open its 14 to 15 stores and not the ones based out of Maharashtra, Gujarat, Delhi, West Bengal, Andhra Pradesh and Telangana. Following the wait and watch policy, Sunil Nayak, CEO, Reliance Jewels,shares that instead of business his company’s focus is on implementing social distancing norms and the government’s directives in our operations. We are therefore devoting the first few days to train our staff into the new way of doing sales. Cleaning and sanitising the stores to ensure safe environment for our staff and customers is also our priority now. We did not send out messages to any patrons notifying about the stores’ reopening,” he updates.

Given the complexities in the detection of the Coronavirus, one of the crucial steps taken by the jewellers is holding medical check-ups for their staff. Even before they report to work, their test has been done and only those found negative, are allowed to return to work.

Pratap Kamath sheds light on what measures have been adopted at his store. “We have maintained all the instructions given by the government. From top to bottom, everyone in the team has to go through mandatory health check-up. Hand sanitisers and masks are made available to everyone,” he adds.

Customer is king and giving instructions to them is quite a challenge but some thinking jewellers have simply nailed it through a spot-on promotional activity.

On the first-day post lockdown, Vikram Verlekar, Director, Ulhas Jewellers, Goa, ensured that the customers abide by the safety measures at the store. To ensure the same, “We distributed hand sanitizer and masks to them.” A thoughtful hand-out at the time Corona crisis is a subtle yet effective way of communicating to the customers about the social distancing norms.

Furthermore jewellers are making provision for single window shopping. “It necessitates that only one salesperson attends to all the needs of a customer. Right from entering the store and product selection to final billing and seeing off, everything is taken care of by that one single sales staff,” says Kamath. Moreover, the Kamath has got digital kiosks and virtual try-on features in place. “While the policy restricts the unnecessary movement of the patrons, the digital features will help buyers select the jewellery without even touching it,” he adds.

It is believed that jewellery sales will pick up faster than other luxury products andthe first day sales is an early indication that from here on gold business will be in its full form. “With social-distancing restrictions in place the fear of catching the infection will prevail even after the lockdown is totally lifted. Limited social gatherings mean limited flaunting. It will negate the whole purpose of spending on luxury brands which have great flaunt value for Indians, says Kamath. At such a time, indulgence in jewellery maybe the only panacea for all Corona-stressed consumers. After all, given how it performed in times of crisis, it is the only luxury that promises both style and substance!

Cheer among jewellery exporters, as Govt. of Maharashtra allows limited diamond and jewellery operations during lockdown