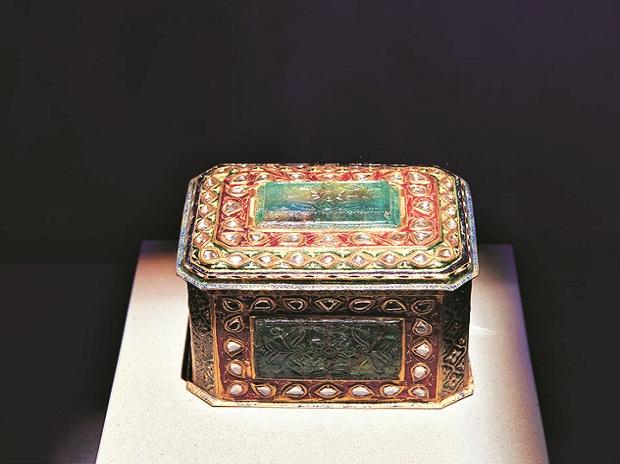 The auction titled ‘Maharajas and Mughal Magnificence’ and organised by the Christie’s will showcase an “unparalleled collection” of stunning jewels, diamonds, finest jewelled objects, gemstones, swords, daggers and decorative objects spanning over 500 years — from the Indian royalty and the Mughal period, the global auction house said.

“This comprehensive trove” will be offered in the landmark auction on June 19, it said.

“Spanning over 500 years of history and sovereign power on the subcontinent, ‘Maharajas & Mughal Magnificence’ tells the story of a continuous tradition of patronage from the Mughal Empire to present day, with provenance including the royal and noble families of India,” the Christie’s said.

Up for auction will be unparalleled collection of Mughal jewels, European-Indian hybrid designs and 20th-Century creations by leading jewellery houses, it said.

The objects are offered from the Al Thani collection.

Among the objects will be the hilt of the state sword of Maharaja Jagatjit Singh of Kapurthala. Estimated at between USD 100,000 and USD 150,000, the sword is enamelled and set with diamonds. Its lion-headed pommel is set with ruby eyes. One side of the hilt is set with a raised and molded crest of Kapurthala and the other side with the words ‘Kapurthala State’ set in diamonds.

Once owned by Shah Jahan, a dagger with an inscription in ‘Nasta’liq’ script is another prominent object in the collection. It is estimated to fetch between USD 1’5 million and USD 2.5 million.

Also on display will be a diamond encrusted ceremonial ceremonial sword of the Nizam of Hyderabad. Set with diamonds, rubies and emeralds, the sword is expected to fetch between USD 1 million and USD 1.5 million.

Another prominent offering is a natural pearl and diamond cartier necklace of Rajmata Gayatri Devi, wife of Maharaja Sawai Man Singh II of Jaipur. The graduated strand of 37 round to oval natural pearls, old-cut marquise-shaped diamond is estimated to be valued at between USD 1 million and USD 1.5 million.

The collection also includes a Tipu Sultan’s pendant, set with rubies and emeralds, and mounted in a gold frame with a pin. A gem set jade-hilted dagger, possibly from Lucknow, is also in the collection.

The objects would be on exhibition from June 14-18 before going under the hammer on June 19.