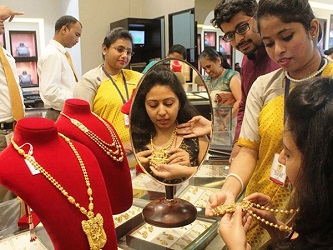 New Delhi: Next time when to go to a jeweller don’t forget to carry your know your customer (KYC) documents like PAN and Aadhaar with you as jewellers have started asking for these documents for gold purchases below Rs 2 lakh. Jewellers fear that the government may make KYC mandatory for all cash transactions in the upcoming budget.

According to a report in the Economic Times, jewellers fear government agencies may clamp down on them if they find any suspicious transactions after the introduction of Prevention of Money Laundering Act (PMLA) for the sector.

At present, all asset classes barring gold require KYC documents for any transaction. But in the case of gold, one needs to submit KYC documents if he or she buys gold worth Rs 2 lakh or more. The government has been trying to make gold as an asset class at par with stocks, mutual funds and real estate.

According to the business daily, the government has been planning to introduce a comprehensive gold policy to develop the precious metal as an asset class. This means the yellow metal will no longer be categorically claimed as the ‘undisclosed treasure’ but a fair investment and luxury holding. India annually consumes 800-850 tonnes of gold.

The gold trade was brought within the PMLA ambit on December 28.

Mehta explained that jewellers would have to report all suspicious transactions and also all cash transactions pertaining to single operation or multiple operations beyond Rs 10 lakhs in a month to the government authorities.

The business daily citing industry sources said that it is a common practice that an individual would buy gold worth below Rs 2 lakh in the name of family members so that they are not be caught. But jewellers now feel that government agencies have become more stringent and they are linking up all transactional details to clamp down on them.

“Jewellers face the chance of arrest if the authorities find some sort of an anomaly in the transactions,” Mehta told the publication.

Mehta, who operates from Zaveri Bazaar, the gold trade hub in Mumbai, said “Many jewellers have started asking KYC from the customers and this has created a lot of confusion as the customers are not willing to share KYC details with jewellers.”

Nirav Modi’s sister, her husband opt for pardon, to testify against him