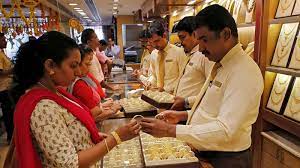 India’s gold sales during the festival period that ends the year may shine less brightly after a massive jump in 2021, and customers won’t be rushing to stores this time around, according to the World Gold Council.

Demand for gold jewellery, coins and bars typically peaks in the world’s second-biggest consumer over October to December, driven by festivals including Diwali that starts next week and the spate of weddings that follow. Jewellery sales nearly doubled in the final quarter last year as consumption revived after two bleak years dominated by the pandemic.

Indians bought a record 344 tons of gold over the period, and sales are unlikely to match that this year, PR Somasundaram, regional chief executive officer at the London-based organization, told Bloomberg Television in an interview on Tuesday.

“We will definitely see better demand than the first half of the year, but it is not going to be as good as it was last year,” he said. “Inflation is a little high, but it is not perceived as something of a crisis here. So, therefore, gold is just seeing a seasonal uptick and there is no crisis push toward gold at this moment in time.”

Gold is often viewed as an inflation hedge, although international markets for the precious metal have been affected more by the surging dollar in recent months, which has kept a lid on prices.

Indian gold demand over the whole year could be as high as 750 tons in 2022, not far off the 800 tons seen last year, Somasundaram said. Digital gold sales via apps or the web have also “caught the fancy of people,” he said.