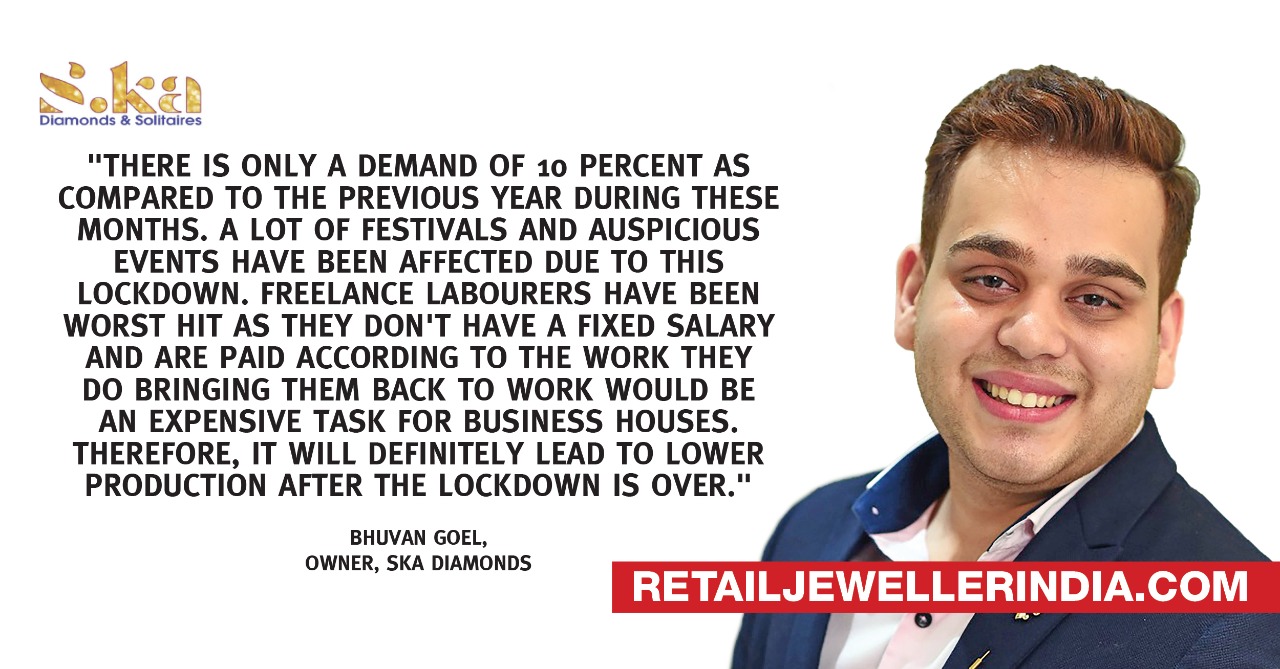 New Delhi (Sputnik): The economic repercussions of the lockdown have jeopardised the prospects of the booming luxury goods market, including the diamond industry, in India. Faced with the challenge of falling demand and an exodus of labour, diamond units in India are now in dire straits.

Less money in people’s pockets does not spell a good omen for the diamond industry in India, which exports 75 percent of the world’s polished diamonds. In such an economic crisis, spending on luxury items such as diamonds would come at the end of the consumer cycle.

Bhuwan Goel, owner of S.ka Diamonds, a jewellery house, tells Sputnik that there is a huge decline in the demand for diamonds, which did not see any improvement even during the festive and wedding season in the country.

“There is only a demand of 10 percent as compared to the previous year during these months. A lot of festivals and auspicious events have been affected due to this lockdown”, Goel said.

The total value of India’s annual diamond exports is around $24 billion.

Similarly, Saurabh A. Khandelwal, owner of Dhanvi Diamonds -an international diamond manufacturer and seller, tells Sputnik that they witnessed a reasonable cancellation of orders, be it for marriage or stock orders, soon after the lockdown was implemented.

“Since [the] last seven-eight days there has been some minor activities going on, but manufacturing has not yet started. Only previous orders are being dispatched and that too only for export backlogs. Nothing is happening on the domestic side”, said Khandelwal.

India implemented a nationwide lockdown on 25 March that exposed the diamond industry in the country to a severe liquidity crisis. The country’s Gem and Jewellery Export Promotion Council (GJEPC) also appealed to the Indian Finance and Commerce Ministry to provide more time to the small and big merchants to pay back their dues as payments remain pending from China.

China is India’s second largest export market for polished diamonds after the United States and is also grappling with an economic crisis.

A report by Indian analytical firm Crisil said that the country’s diamond polishing industry is set to witness a decadal low of $13-15 billion in fiscal 2021, compared with $24 billion in 2019.

India’s jewellery export to the United States and Europe, together comprising over 45 percent of India’s shipment of polished diamonds, has also plunged to 41 percent in February, when the COVID-19 crisis became severe. The figure further declined after the lockdown was imposed.

No Stones Left To Cut; Labourers Leave For Home

Collateral damage caused by the lockdown pertains not only to the merchants and sellers, but also the skilled and unskilled labourers employed in the diamond manufacturing and polishing factories.

Owing to cheap and abundant labour, 90 percent of all diamond cutting and polishing is done in India, mostly by artisans in Surat city of the western Indian state of Gujarat. The city witnessed a mass exodus of migrants soon after the lockdown was announced.

Talking about the industry in general, S.ka Diamond owner Goel said companies did pay salaries to their employees in the first month, but due to the continuous decline in sales and uncertainty of opening the lockdown, many employers paid a 50 percent salary to their employees at the beginning of May.

“Freelance labourers have been worst hit as they don’t have a fixed salary and are paid according to the work they do… bringing them back to work would be an expensive task for business houses. Therefore, it will definitely lead to lower production after the lockdown is over”, Goel pointed out.

Similarly, Dhanvi Diamond owner Khandelwal informed that most of the skilled labourers or the top category of labour in the industry have been retained, but the daily wagers have had to be laid off in small-scale factories. “They were offered full payment for the month and assistance to go back to their villages”, Khandelwal said.

The diamond industry in India employs nearly 1.5 million people, mostly in small units and factories that have found it difficult to sustain themselves during the lockdown period and therefore have had to lay off the workforce.

“We do not have any means to feed ourselves, I have been surviving on borrowings from home (Kolkata city) or from friends. Other workers have left for their hometowns out of their own volition”, said Prasanjeet, a labourer in a small jewellery-making unit in Uttar Pradesh’s Kanpur city.

Prasanjeet said he has been in this profession for the past 12 years and is now afraid of an uncertain future.

Stating that the coronavirus is going to change the entire motion of consumer behaviour, Khandelwal was positive when asked whether the demand will pick up in this luxury segment soon.

“When people will spend less on dining out, tours and travelling, the money will go either in [the] bank or in jewellery. Obviously, demand will be slow in [the] beginning, but I think in another two-three months it will start levelling out as our clients are a little positive about opening up after 17 May”, he said.

When asked if they have any strategy to attract buyers and rejuvenate the demand, Khandelwal pointed out that the firm will for the next six months target lower budget production.

“We are planning to focus on lower size budget of the jewellery – production and selling out between [the] INR 5,000-25,000 (around 300 USD) range. This is a range which a buyer will be better able afford”.

India has been under lockdown since 25 March and Prime Minister Narendra Modi said in a nationwide address that the fourth phase – lockdown 4.0 – will be implemented with completely new guidelines after 17 May, the details of which are still awaited.

Growing risk of liquidation of gold in India: Chris Wood